AJH Synth Tap Tempo VC‑LFO.At first sight Tap Tempo VC‑LFO does exactly what you’d expect, with an enhanced selection of all your usual LFO wave shapes, perfect for those classic modulations. You’ll find saws, sines, and squares, alongside randomised outputs, but as the name suggests, you can tempo match these easily by hitting the Tap button, located right in the centre of the panel. There’s also capacity to clock the LFO from your system’s clock, which is a useful facility not always found on Eurorack LFOs. So far, so usual, at least for a basic LFO module, but from here on things start to get delightfully messy!

A second bank of onboard waveforms move us away from the norm, with notions of repeating pulses, stepped shapes and sine‑like forms that decrease over time. Adding to the wave fun, the WF‑Twist pot allows mutation of each and every waveform, providing less of an LFO source, and more a location for more interesting modulation shapes. Using these complex shapes, you could create anything from ambient musical backdrops to spaceships taking off, and in typical AJstyle, absolutely all parameters are open to CV control.

In an attempt to alleviate issues that often arise from the differences between modules that prefer unipolar over bipolar inputs, this module includes a dedicated output for both forms, providing capacity to utilise both sources simultaneously, if required.

Tap Tempo VC‑LFO is another one of those modules that appears simple enough, on the face of it, but dig beneath the surface and not only does it go far further than expected, it also rectifies certain issues by supplying control and usable sources along the way.

Meanwhile, AJH’s Dual Random Voltage Event Generator is a limited‑edition module, restricted to a run of only 250 units. The Dual RVG is billed as a random voltage generator, in the same vein that you might expect from a sample & hold module, but in good AJH tradition, it takes the concept far further, adding useful functionality along the way.

...every seasoned Eurorack devotee enjoys a random element in a system, and this module provides that in spades, while equipping the randomisation with degrees of control and limitation... 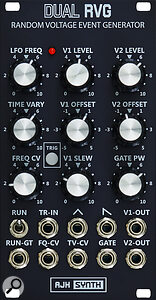 AJH Synth Dual RVG.Dealing with the random elements first, this module provides two channels of randomised voltage output. Just about every seasoned Eurorack devotee enjoys a random element in a system, and this module provides that in spades, while equipping the randomisation with degrees of control and limitation, meaning that you can time and limit the CV output to suit your requirements. A trigger button allows manual generation of a random voltage, with an associated gate input allowing this to operate from a pulse or clock. The frequency of output is then controlled via a dedicated pot, with an additional variation pot allowing you to dial in the amount of required randomisation, in both pulse and regularity. The result can be a chaotic number of output pulses, with moments of extreme dormancy.

Both random output channels are equipped with the ability to offset and control the levels of the CVs, while output channel one is also equipped with a Slew control, allowing the easy dialling in of glide from one CV to the next. It is also possible to control the pulse width of the gate, and of course all elements are open to CV control.

It’s always nice to have obvious and useful additions, and this module will also provide either a triangle or sawtooth LFO, available from a no‑frills jack output.

If there’s one thing you can always say about AJH modules, it’s that they are built to some of the highest specifications in the Eurorack industry. They are solid, with absolutely zero hint of pot‑wobble, with jack points that ooze quality and reliability in connection. Whether you are a MiniMod System user or not, these modules are both functional and incredibly desirable — so much so that you would be quite likely to miss them once you’ve tried them in your rig.