AJH Synth’s original Mini Mod series has always blazed the trail, supplying a Minimoog concept in Eurorack form. Coupling exacting detail with a beautiful build, AJ are one company building modules to the highest of specs. The continuation of this line has yielded further modules in the Mini Mod series, extending functionality and ethos way beyond the original Mini’s limits. One of the latest in this series is the Multi Burst Envelopes module, which by name alone supplies a fairly accurate description of its raison d’être. 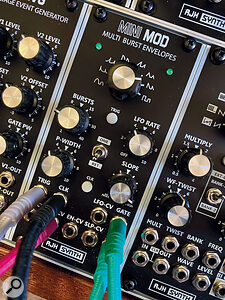 The MBE provides eight predefined envelope shapes, which fire upon receipt of a gate trigger. The envelope can then be set to trigger just once, or in a series of repetitious burst, all the way up to 40 repeats. The proximity of these bursts can be governed in a free‑wheeling mode, or clocked to duplet and triplet note values, once provided with an appropriate clock pulse.

The envelope shapes range from the heavy transients of a saw or square pulse, through to triangles and more elliptical shapes. They are ideal for a creating the more usual ‘laser blast’ effects, but can prove to be a fertile source of creativity throughout the modular. The LFO Rate pot governs the speed of delivery between each burst; in free mode, the LFO rate is smooth, creeping into audio rate territory, but once a clock pulse is engaged, the LFO switches to control the aforementioned clock divisions. It’s not possible to create Maths‑like bouncing ball effects from within the module exclusively, but it is feasible once combined with an associated external LFO. By modulating the LFO‑CV pot, you can engineer all manner of controlled accelerando, rallentando and ratcheting effects, the latter being a particular modular favourite.

With similar cause, the Slope pot provides an escalation or diminishing of voltages, across the duration of the burst, allowing increases/decreases in volume, or ferocity of modulation. The play from this output is very generous indeed, with more than enough output to provide a sub‑level starting point, through to a generous climax. This pot is also open to CV control, and I found that combining the LFO and Slope elements with the same modulation source worked incredibly well, although additional attenuation, applied elsewhere within the modular, proved useful.

In line with the LFO and Slope controls, the envelope selection pot, number of bursts and pulse width are also open to CV control. If accompanied by an appropriate modulation source, either in a cycle or randomised form, the results can become endearingly hypnotic, especially if teamed up with modules at the more digital end of sound generation. By design though, the MBE successfully adopts the Mini Mod branding. Even within the modest Mini echelons, there is plenty of functionality for both vintage‑style and cool‑contemporary deployment.