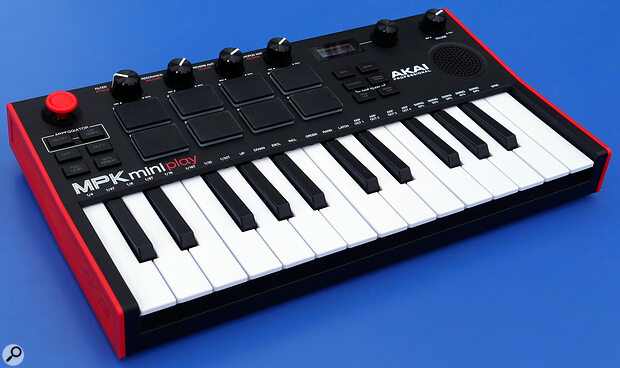 Akai’s MPK Mini Play MkIII is a small keyboard with a dual identity.

The MPK Mini Play MkIII is a lively looking mini keyboard with most of the features of the MPK Mini MkIII. It sacrifices a few knobs to benefit from a bank of 128 internal sounds, 10 drum kits, and a speaker. It can be battery powered to sit it on your knee and enjoy playing the sounds on the bus, in the park or wherever you may be without any other gear.

It has a bit of a split personality: by itself it’s a cool little musical keyboard, while connected to a computer it becomes a MIDI controller. There is a bit of crossover, but it’s odd and slightly confused to the point that it’s perhaps easier to see the Mini Play as one thing or the other, rather than both.

First, let’s look at it as an instrument. The MPK Mini Play MkIII is portable, fun to play, with some decent sounds and just enough tweaking to make it interesting. It’s had a makeover since the last version, wrapping it in red, giving it a slight incline to the front panel, rearranging the knobs and improving both the keys and the speaker. Akai have upgrade the pads to the same ones found on the MPC range of machines.

The feel of the keys is good, it manages to accommodate both my hands easily over the two octaves, and the sound out of the speaker is responsive and good enough to work with. Compared to most speakers that you find in a mini synth this is pretty nice. The pads have that firm heaviness of the MPC and are very dynamic, particularly when listening on headphones. At the top left is a fun red joystick that provides the pitch bend, modulation and some expressive velocity control. It works great, springs back to the middle smartly and feels like it’s the thing you’ll accidentally break off when taking the keyboard to a gig.

Scrolling through the onboard sounds you quickly realise that this is a General MIDI set, although Akai don’t refer to it as being so. As GM soundsets go it’s not half bad, and the Mini Play has a couple of tricks up its sleeve to take it from not half bad to quite a nice experience. The row of four knobs along the top gives you the resonance and cutoff of an internal filter and the depth of reverb and chorus you can apply to the sound. In Shift mode, they become Attack and Release and Hi and Low EQ. These simple additions to the run‑of‑the‑mill sounds can transform them into something else entirely. The filter is a lot of fun, the reverb does the job, and the chorus brings in a good bit of wobble. The effects work OK over the speaker, but you get a much more rewarding experience with headphones.

The arpeggiator is a stand‑out feature, and Akai devote the whole keyboard to providing settings for it. There are multiple time divisions, multiple note orders including a random option, a range of up to four octaves, and swing, which ranges from bright and breezy to drunk and disorderly. Using the arp with the filter and effects can quickly develop pretty much any sound into something interesting. And then you find yourself playing along with the drum pads and having a really great time.

In the drum kit department, you get all the usual suspects from your standard, room and jazz drums, through your ’80s power ballads, a rather nice TR‑808, orchestra and a suitably silly special effects kit. Each kit has 16 sounds that you can toggle on to the eight pads via a button press. This does mean you can’t play cowbell at the same time as the kick and snare, but maybe that’s a good thing. You can, of course, address the whole kit via software, but you’re not really encouraged to do so, something I’ll come onto in a minute. The kits sound good and you can play them quite expressively, or you can toggle the Full Level button to play everything at full velocity.

When playing along with the arp you realise that what this needs is a drum sequencer or looper or some way of getting the drums to play so that you can play the keys alongside. Even the lowliest mini home keyboards have a bossa nova or pop drum pattern. This feels like a missed opportunity. However, it does have a Note Repeat button so you can hold the hi‑hat down and sort of play along that way, but it doesn’t lend itself to playing a pattern. Maybe I’m expecting too much from the Mini Play.

One nice feature is the Favourites function which gives you eight slots for saving your tweaked sounds. Each Favourite includes the sound with the filter and effects settings plus the chosen drum kit, and you can recall them on the fly. I think this feature turns the Mini Play into a potentially useful gigging companion. It’s a compact source of playable sounds with a filter and an arpeggiator that could fill a spot in your rig.

Things are pretty simple round the back, with just a USB/battery power switch, a USB port, a 3.5mm headphone output and a quarter‑inch sustain pedal input.

The second life of the Mini Play is as a MIDI controller for your DAW. You get a handful of software synths and Akai’s MPC Beats DAW software as a bundle. The controller has a selection of templates for MPC Beats, Ableton Live, FL Studio, Logic Pro and GarageBand, although there’s nothing in the Mini Play documentation to tell you what these do. There are also no DAW‑related controls like transport or channel select buttons. Ultimately within any MIDI application, the Mini Play gives you a keyboard, two banks of eight pads and four assignable knobs. You can use the arpeggiator over MIDI and you can route back to use the onboard sounds, although there’s no documentation to tell you how.

The MPK Mini Play is portable, fun to play, with some decent sounds and just enough tweaking to make it interesting.

And this is where it gets a bit weird. When first trying out the Mini Play I made the crazy assumption that the sound engine was General MIDI and so 16‑part multitimbral. You can certainly play 16 pianos on 16 channels without any bother, but once I tried to allocate different sounds it all fell apart. Ableton somehow managed to allocate a couple of different sounds but never to the right channel or the one I thought it was on. In MPC Beats you can put a Program Change message onto any channel but the sound was only changed on channel 1. With Reaper it got so confused it locked up the MPK and then blue‑screened my computer. So potentially, you can have any sound you like on channel 1 and a piano on another channel, but it’s probably best to use whatever sound you’ve dialled in on the Mini Play and stick with that; Akai never claimed it would do anything more.

Akai also suggest that you turn off the internal sounds when using it with your computer, so you don’t get sound out of the keyboard at the same time as using a virtual instrument. It’s essentially turning Local off, which makes sense except that if you want to use the internal sounds with your DAW the speaker is now disabled, and the volume in the headphones drops massively. It’s just strange.

The lack of documentation or tutorials that mention using the internal sounds with your computer makes me wonder whether they were ever intended to be used together and that I’m flogging a dead horse. But it seems to fumble what is otherwise the key feature of the MPK Mini Play.

As a little sound source and a fun thing to play the MPK Mini Play MkIII has a lot going for it. It has a decent feel, the sounds are OK, and there’s enjoyment to be had from the arpeggiator and sound tweaking. As a controller it works well enough for some MIDI control but has fewer knobs than the regular MPK Mini. The difficulty in trying to marry the two personalities could be worked out in time, and at the least you do end up with a single hardware soundbank and drum kit. However, it’s important not to make assumptions about what it’s capable of.

The MPK Mini Play MkIII is a good‑looking, compact, portable keyboard with enough sounds and features to keep things interesting, but doesn’t live up to its full potential when connected to a computer.