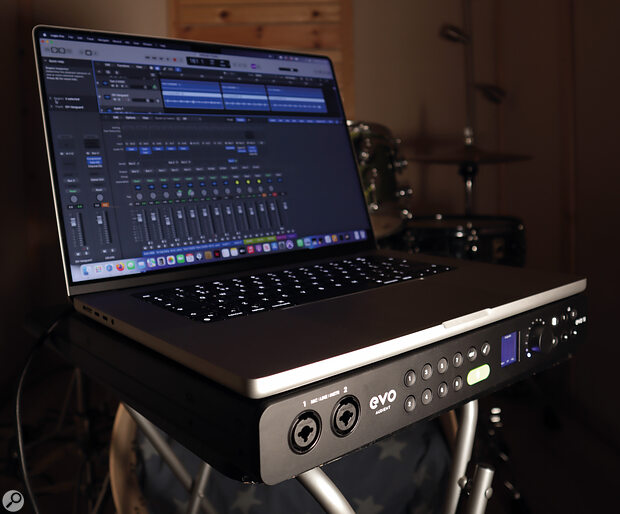 The EVO 16 targets newcomers to recording, but offers some surprisingly professional features.

Audient started out as manufacturers of large‑ and medium‑format analogue mixing consoles, drawing on the immense experience of designer Dave Dearden. When they moved into making audio interfaces, one of the key selling points was their ability to apply this analogue design expertise in the new sector. Audient’s ID range thus combines ergonomic desktop form factors with mic preamps and other circuit designs closely related to those used in their flagship ASP consoles.

The ID‑series interfaces are competitively priced, but on the pure value‑for‑money front, they are undercut by rival products that use mass‑market, off‑the‑shelf components and circuits. Hence the launch of Audient’s EVO series of interfaces, brought to market more affordably by the use of generic audio circuitry instead of the Audient custom designs employed in the ID series. But price isn’t the only thing differentiating the EVO interfaces from their ID brethren.

The market for budget, entry‑level interfaces is mostly made up of newcomers to recording. These customers, on the one hand, benefit from designs that present the easiest possible learning curve; but on the other, they’re also unburdened by preconceptions as to how an audio interface should work. Consequently, Audient have put a lot of work into the usability and ergonomics of the EVO series, and they’ve not been afraid to depart from established convention. The EVO 4 and EVO 8 look nothing like any other audio interface I’ve ever seen, and present a refreshingly minimal and friendly user interface.

Designed to sit on a desktop, those two units can be bus‑powered, and are aimed primarily at podcasters and self‑recording musicians. The new EVO 16 is rather different. Though it too connects to the host computer using a single USB‑C port, it’s a mains‑powered device (with an internal PSU, happily) that boasts eight analogue inputs with mic preamps, eight line outputs and a pair of independent headphone outputs. It also introduces digital I/O into the EVO equation for the first time, and with impressive comprehensiveness. Two pairs of optical Toslink connectors are switchable between ADAT Lightpipe and stereo S/PDIF digital audio formats, and there’s also a word‑clock output so that you can keep connected devices locked to the EVO 16. So, although it’s called the EVO 16, it actually offers up to 24 inputs and outputs at base sample rates. At 88.1 or 96 kHz the ADAT channel count is halved, as usual, for a total of 16 I/O.

The plastic casing of the EVO 8 and 4 raised some eyebrows, but I can’t find anything to complain about in the physical design of the EVO 16, which is predominantly made of metal and feels very sturdy. One interesting design choice concerns rackmounting: Audient’s research suggests that the majority of customers in this sector don’t own any 19‑inch rack gear and are more likely to use an interface freestanding. As shipped, therefore, the EVO 16 comes without rack ears and with a pair of rubber feet that allow it to sit firmly on a desktop without scratching it. Anyone who does want to rackmount it can register their unit to receive an optional kit, and the feet are easily removed. This seems a sensible approach to me, though I suppose you could argue that if Audient really aren’t expecting it to be rackmounted, they could have used a different form factor with the controls on the top.

Most of the EVO 16’s I/O is on the rear panel, along with the USB‑C port and mains IEC inlet.

One of the distinguishing features of the EVO 8 and 4 is that there are no analogue controls at all. Buttons select different parameters for adjustment, and an endless rotary encoder with a halo of white LEDs does the adjusting. Helping out in the background, meanwhile, are technologies such as Smartgain, of which more presently. The EVO 16 extends this all‑digital approach in a logical fashion, with the headline new feature being something Audient call Motion UI. Whereas the smaller EVOs offer only that LED halo to provide visual feedback, the EVO 16 has a square, high‑resolution colour display; and the idea behind Motion UI is to give the user immediate and clear indication of whatever it is they’re doing at the moment.

As on the smaller EVO interfaces, there’s a numbered button for each input channel, plus two more buttons to toggle phantom power and high‑impedance mode. This last is available only on the first two inputs, which emerge on the two front‑panel combi sockets. So, for example, to engage high‑impedance mode on channel two, you’d first press the button labelled ‘2’ to bring that input into focus, whereupon its numeral lights up. You can...