Every studio needs at least one good vocal mic. Is Audix’s A231 the right choice for yours? 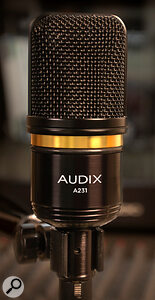 Audix mics are perhaps more often encountered on stage than in the studio, but over the last couple of years, the American manufacturers have been working to change that. Last year, I looked at their flagship omnidirectional pencil mic, the A127, and Audix have now launched a large‑diaphragm mic targeted squarely at vocal capture in the studio. The A231 is an externally biased or true‑capacitor model with a fixed cardioid polar pattern, and incorporates some of the design elements that made the A127 stand out, notably the 'active driven shield', which protects the high‑impedance circuitry from interference.

Audix’s publicity material for the A231 makes a few statements that deserve unpacking. One such concerns the 'effective area' of the diaphragm. If you look at photos of a typical Neumann‑style, centre‑terminated large‑diaphragm capsule, you’ll see that the thin layer of gold doesn’t extend all the way to the edges of the membrane; a ring‑shaped area of Mylar around the outside is left uncoated in order to keep it insulated from the surround. In an edge‑terminated capsule, by contrast, the gold‑sputtered area must fully cover the diaphragm in order to make contact with the termination point. The A231 uses an edge‑terminated capsule, and this leads Audix to claim that its effective area is 25 percent larger than 'typical' capsules from other manufacturers. On paper, the benefits of this might include a greater signal‑to‑noise ratio in the capsule and hence the mic as a whole.

It’s an interesting claim, but arguably true only inasmuch as 'typical' capsules are centre‑terminated, which is debatable. The edge‑terminated capsule in one form or another has been around since the 1950s, most notably in AKG’s C12 and derivatives such as the C414. It’s probably fair to say that capsules patterned after Neumann’s centre‑terminated K67 are still more common, but even so, it’s not clear to me that Audix’s design really brings anything new to the party.

The A231 uses an edge‑terminated capsule; as Audix point out in their publicity material, this means that the gold‑sputtered area extends all the way to the surrounding ring, increasing the effective area of the diaphragm compared with Neumann‑style centre‑terminated capsules.It certainly doesn’t seem to have produced a radical improvement in noise performance. The specified self‑noise for the A231 is 12dBA, exactly the same as the figure given for the A127. For a small‑diaphragm mic, that’s astonishing, and almost at the theoretical limit — but in a large‑diaphragm mic, especially one that has a fixed cardioid polar pattern and hence only one side of the diaphragm in circuit, it’s merely impressive. For comparison, the Neumann TLM103 has a specified self‑noise of 7dBA, while the Rode NT1‑A achieves an incredible 5dBA and the CAD Equitek 100S claims an even more remarkable 3.7dBA. Even Audix’s own A131, which has an electret capsule rather than an externally biased one, achieves 10dBA, though Audix told me that the published figure for the A231 is deliberately conservative to allow for production tolerances; apparently we can expect most real‑world examples to measure 10dBA or less.

The A231 ships in a good‑quality padded carry case which should keep it safe. The only accessory supplied is a simple mic clip, and Audix say that their internal shockmount design obviates the need for further protection from bumps and stand‑borne noise. At 146mm tall by 54.5mm wide it’s almost exactly the same size as an AKG C414, and thus a fair bit smaller than the U87s of this world. The body is machined from aluminium, and feels extremely tough; it’s also very well damped, with no ringing audible when you tap the shell. To differentiate the A231 from the more affordable A131, which is otherwise very similar in appearance, Audix have added a gold‑plated brass band directly underneath the grille. This divided opinion among performers: some liked it, others thought it a little cheesy. No‑one could fault the quality of the finish, however, which is extremely good.

There are no pad or filter switches to spoil the A231’s clean lines. Given that the maximum SPL is quoted as 140dB, it’s hard to imagine many situations where additional attenuation would be needed, unless it is to protect preamps and converters from super‑hot levels. A source of 48V phantom power (±4V) is required for operation, and the A231 has a comfortable sensitivity of 16mV/Pa with a nominal output impedance of 150Ω. Like most modern mics, the A231 is a transformerless design.

Although its capsule is a fairly standard 33mm in diameter, Audix say that its effective area is 25 percent larger than typical capsules from other manufacturers.

The published polar pattern is impressively consistent from 500Hz up to 8kHz, showing a controlled cardioid response with a trace of a ‘tail’ behind the mic. As you’d expect, this rear lobe develops further at low frequencies, and the pattern at 16kHz is also somewhat more omnidirectional. The on‑axis frequency response is more or less flat from 50Hz to 1kHz. Thereafter, a very broad presence lift extends to about 15kHz, but even at its peak, this is barely 2dB above the baseline. The response (measured at a 50cm distance) drops away fairly steeply above 15kHz and below 50Hz, suggesting this mic wouldn’t perhaps be a first choice for ultrasonic recordings or big church organs. Not that either source features on Audix’s list of suggested applications, which majors on studio vocals but also includes piano, choir and acoustic instruments.

Test recordings with several different singers made clear that the A231 is certainly well suited to its intended role. On a practical level, the mic’s dual‑woven mesh grille seems to offer decent protection against plosive pops, and the built‑in shockmounting is effective, so this is a mic you can put up in front of most singers without having to worry too much about unwanted noises creeping in. I should also make crystal clear that this is absolutely not a noisy microphone! I happily employed the A231 for spoken‑word recording and other quiet sources during the review period and it performed very well indeed. Proximity effect seems to be fairly well controlled, too, so I didn’t lament the omission of a built‑in high‑pass filter.

On a sonic level, the A231 seems to strike a nice balance between flattering the source and remaining versatile. In comparison with an AKG C414B‑ULS, which I always think of as quite a subdued and neutral‑sounding mic, the additional presence in the 2‑3 kHz area was readily apparent but not unpleasant. Further up the spectrum, the two sounded very similar, while the A231 has a leaner low midrange, without the hint of thickness that you get from the C414’s transformer. Pitted against a Neumann U87, by contrast, the A231 was slightly brighter in the top end and, if anything, marginally less present in the midrange. It didn’t come across as obviously inferior to either of these industry‑standard vocal mics, which is impressive when you consider the A231’s competitive price.

As far as acoustic instruments go, steel‑strung guitar is a source that I always expect to be revealing of the quality of mics, but it doesn’t always work out that way in practice! The A231 turned in a creditable performance, delivering very usable results, though the presence lift can make it sound a touch ‘hard’. On electric guitar it was likewise very capable, and for the typical home studio where one high‑quality mic needs to turn its hand to instrumental overdubs as well as vocals, I think the A231 would be an excellent choice.

There are numerous simple but versatile cardioid‑only large‑diaphragm mics on the market. Obvious competitors to the A231 include the Austrian Audio OC18 and OC16, Neumann TLM103, Lewitt LCT 540S and Audio‑Technica AT4040.

A versatile, high‑quality studio microphone that excels at — but is not at all limited to — vocal recording.