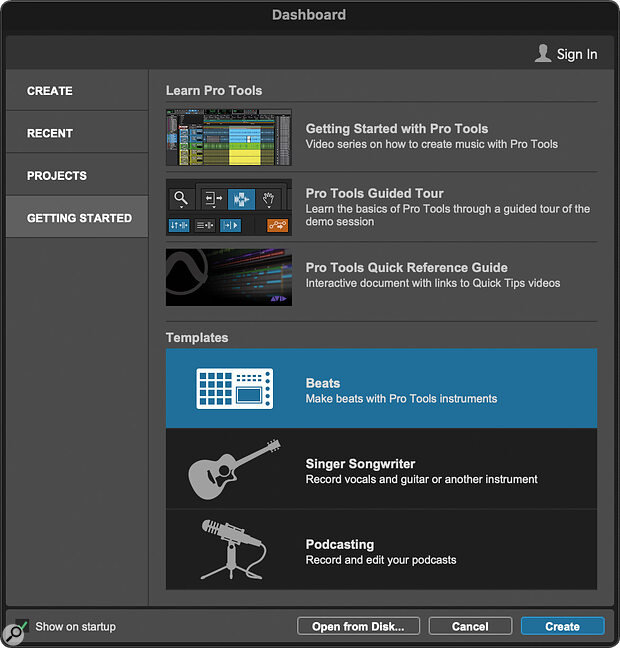 A major focus in the development of Pro Tools Artist has been smoothing the learning curve for new users. Incidentally, it seems that Dark mode is now the default, though the classic Pro Tools grey look is still available.

Is the most affordable version of Avid’s DAW still a serious music production tool?

One of Avid’s stated reasons for moving Pro Tools to a subscription model was to adopt a ‘little and often’ approach to updates. No longer would they have to save up new features for a big integer release every couple of years; instead, they could make them available as soon as they were ready. It’s been a bumpy ride at times, but on balance, I think most users would agree that there’s merit to this approach, and Avid have continued to offer perpetual licences to the unconvinced. Earlier this year, however, they announced a major overhaul of the Pro Tools pricing structure, and by the time you read this, it will no longer be possible to buy a perpetual licence. The most widely used digital workstation software in professional music circles is now effectively a subscription‑only product, though of course existing perpetual licences won’t cease to be valid.

Hand in hand with this move came a reconfiguration of the Pro Tools product line. For quite a few years now, Avid have offered two paid‑for versions of the software alongside a free version called Pro Tools First. Pro Tools First was a useful educational tool and taster for the real thing, but was too limited for most real‑world production tasks, especially as it could only work with cloud‑based Projects and not with the locally hosted Session format. However, it was quite a step up from there price‑wise to the first paid‑for version. Known simply as Pro Tools or Pro Tools Software, this was a fully fledged, professional, cross‑platform DAW that could work with any Core Audio or ASIO‑compatible hardware, and was the obvious choice for most hobbyists, studios and music production professionals.

Separated by another steep price barrier, the top tier of the old line‑up was Pro Tools Ultimate. Some of the features exclusive to Ultimate were oriented towards post‑production, such as the ability to work with multiple video tracks, but there were also Ultimate‑only features relevant to music. The most important of these included support for Avid’s HDX hardware and AAX DSP plug‑ins, higher I/O counts, and the ability to work in multichannel formats including Ambisonics and Dolby Atmos.

Most people working in music got along just fine with plain Pro Tools, but there were some negatives to this line‑up. The nomenclature was confusing: when someone talked of Pro Tools, did they refer to the product range as a whole, or just to the mid‑tier version? And with Pro Tools First being so limited, anyone wanting to do more than experiment was forced to pay professional prices to buy a professional product, even if they weren’t running a studio or doing work for hire. What’s more, this product didn’t come across as particularly friendly and welcoming to the newcomer, and from a music creation perspective, was missing various tools found in some much more affordable rivals. Finally, in a world where Apple were adding Atmos mixing to Logic for free, many people who wanted to dabble in the new format were tempted to jump ship rather than upgrade to Pro Tools Ultimate.

Avid have addressed all of these issues in their latest revamp. There are now three versions of the software, available only on subscription plans at different monthly or yearly price levels. The most expensive of these is still called Pro Tools Ultimate, but the subscription plan that includes Ultimate is known as Pro Tools Flex. At the mid level, Pro Tools Studio replaces Pro Tools (Software). A significant change here is that Pro Tools Studio now incorporates all of the multichannel functionality needed for Atmos or Ambisonics. A significant non‑change is that it still doesn’t support any HDX hardware apart from Pro Tools Carbon.

Entirely new, meanwhile, is the most affordable edition of Pro Tools. Pro Tools Artist is explicitly aimed at people just getting into production, and although it’s not free, it’s less than one‑third the price of Pro Tools Studio. It is, as you’d expect, feature‑limited in some respects, but much less so than Pro Tools First was, and Avid have added new plug‑in instruments to help it compete with rival music‑creation packages. They’ve also sought to make the ‘onboarding’ process more friendly for new users.

The ‘little and often’ update model means that Pro Tools now presents a moving target, and consequently, there hasn’t been a Pro Tools review in SOS for some time. With Pro Tools Artist being, in effect, a new product, it...