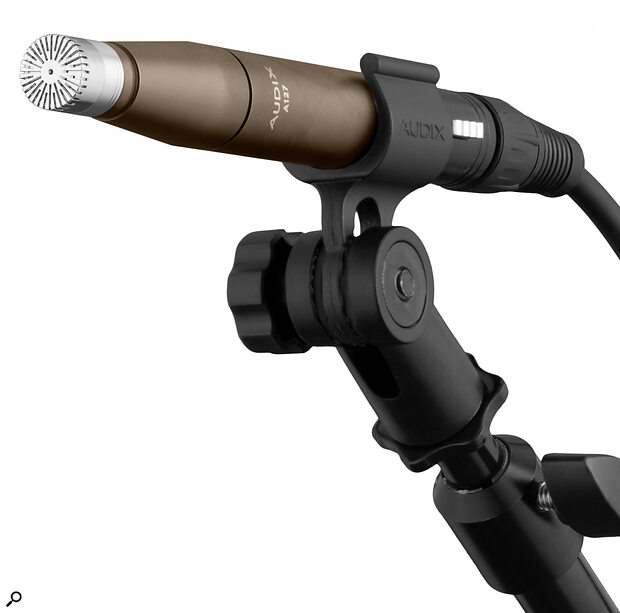 Audix are renowned for their dynamic mics, but their latest model is a high‑end electret design intended to compete with some of the best instrument mics in the world.

Over the last 40 years or so, Audix have quietly established themselves as one of the world’s leading microphone manufacturers. The Oregon‑based company are perhaps best known for models such as the D6 bass instrument mic and the OM‑series handheld mics, but their range also encompasses affordable capacitor models for stage and studio use. At the time of writing, in fact, there are over 30 wired mics in the Audix catalogue, as well as numerous sets, bundles and accessories.

Until now, Audix have made it their mission to offer high‑quality products at affordable prices, but the new A127 is a bit of a departure. By some distance the most expensive microphone in their entire line, it’s a no‑compromise omnidirectional ‘pencil’ mic with a half‑inch capsule, and is clearly intended to provide competition for the likes of Schoeps, DPA, Sennheiser, Neumann and Microtech Gefell.

The A127’s capsule, which conforms to the IEC spec for measurement mics, employs a 3µm diaphragm made of metal. This is perhaps a less common membrane material than conventional gold‑sputtered Mylar, but it’s not new; from the Neumann KM53 back in the ’50s to the Gefell M221 today, many excellent capsules have been designed with nickel or other metal diaphragms.

What’s more unusual is that Audix are using a pre‑polarised or electret design, rather than an externally polarised or ‘true’ capacitor capsule. Back in the ’70s, electret capsules were associated with cheap and cheerful consumer mics, as the available options offered mediocre performance and limited durability. However, this technology has moved forward a lot over the years, and many manufacturers are able to offer truly cutting‑edge performance from their pre‑polarised designs. If the specifications for the A127 are anything to go by, that includes Audix!

The mic is voiced to give a flat response in the near or free field, and the published frequency chart shows almost no deviation whatsoever between 10Hz and 15kHz. Above this there’s a very, very slight roll‑off, with the response being about 1.5dB down at 20kHz. The polar pattern is equally pure, exhibiting a perfect omnidirectional characteristic up to the upper midrange. From about 4kHz and above, the shadowing effect of the body begins to darken the off‑axis response a little, as is always the case, but in a very gentle and natural way.

At 94dB SPL, THD+Noise is specified at 0.004 percent. This rises to 1 percent at 140dB SPL, which is thus quoted as the maximum signal level the mic can accept. Given that this probably isn’t something you’d use to close‑mic a snare drum or bass amp, that should be more than enough for all practical recording scenarios. Sensitivity is a relatively high 28mV/Pa, which makes sense in a mic designed to handle delicate acoustic sources, and as you’d expect, the electronics are transformerless.

The most eye‑catching figures on the A127’s spec sheet refer to its noise performance, achieved partly through what they call an ‘active driven shield’, which surrounds the high‑impedance parts of the circuit to protect them from interference and capacitive coupling. The initial published specifications seemed too good to be true, and I suspect they referred only to the mic’s electronics; when I queried them, Audix reported that the true self‑noise of the complete mic measured acoustically is a more plausible but nevertheless hugely impressive 12dBA. Small‑diaphragm mics are intrinsically noisier than their large‑diaphragm brethren, and this figure stands out against the competition; for comparison, the Gefell M221 and DPA 4006 have a self‑noise of 15dBA, while the Josephson C617SET manages 14dBA and the Neumann KM‑A/KK131 achieves 13dBA.

The A127 ships in a smart and robust fabric case, with a simple clip and a basic foam windshield. Manufacturing quality and finish are as flawless as you’d expect at the price, though the choice of a black finish for the body and silver for the capsules is unusual. With its slightly tapered shape, the mic somewhat resembles the aforementioned Gefell M221, but at only 122mm long and 19mm in diameter, it’s rather smaller.

The A127 has a subtle richness to its sound that is very appealing. I was particularly struck by its ability to present a full and solid midrange without ever exaggerating or misrepresenting anything.

I had a pair of A127s on loan for quite a while, and was able to test them both in typical studio applications and on a location string session. I quickly became very enamoured of them, both for their quietness and for their sound. The former is not so relevant when you’re miking a drum kit, but for something like solo cello, it can make a real difference. And as for the latter, the A127 has a subtle richness to its sound that is very appealing. I was particularly struck by its ability to present a full and solid midrange without ever exaggerating or misrepresenting anything. Transients are captured in a superbly clean and natural fashion, and the A127 responds to EQ very well.

In short, the A127 offers everything you’d expect of a top‑flight omni, and I cannot find any fault with the mic itself. However, if you browse the optional accessories on Audix’s website, you’ll find that they are all generic items. Some are potentially useful, such as a shockmount and a phantom power supply; others are rather incongruous, like the clip‑on mount for drums and popshield. What you won’t find is anything specifically designed to change the sound or pickup pattern of the A127. There are, for example, no grids to adjust the frequency response for diffuse‑field placement, nor any acoustic pressure equaliser spheres to adapt it for use in a Decca Tree. And, although the capsule appears to be detachable from the body by unscrewing, there are presently no alternative capsules available.

I hope that Audix will develop a range of compatible accessories along these lines, because frankly, the A127 deserves them. This is a lovely mic that easily justifies its not‑inconsiderable price tag. Any engineer who hears this mic in action will immediately recognise its quality, and it would be a shame if it gets overlooked just because it doesn’t yet have the adaptability of more established systems from DPA, Schoeps, Neumann and the like. Speaking for myself, I’m not currently in the market for a pair of high‑end omni mics — or at least, I thought I wasn’t. Then I tried the A127...

Audix’s move into the high end of the microphone market has delivered the goods, combining impeccable sound with class‑leading low‑noise performance.