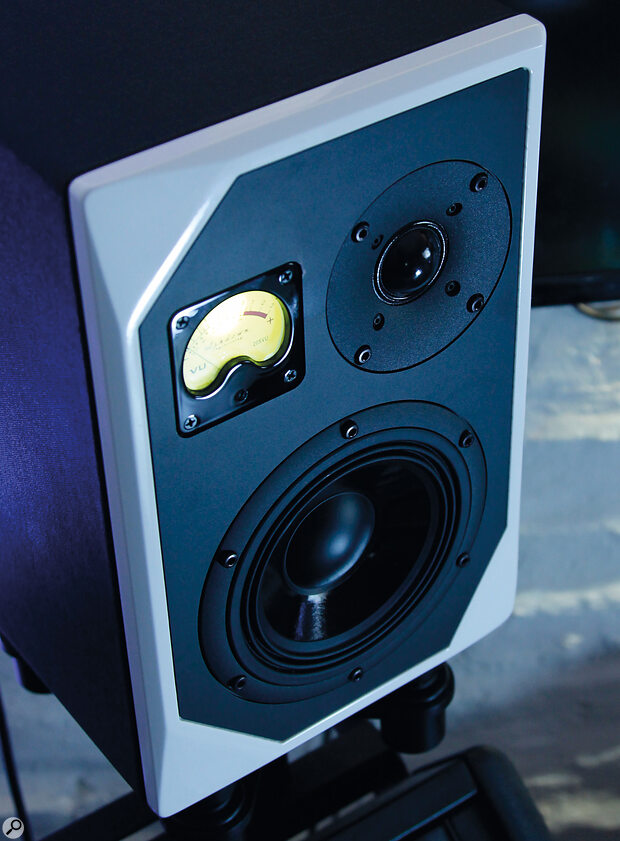 British bass‑amp brand Ashdown’s debut monitor is inspired by the classic BBC LS3/5a. How does it compare with the real deal?

If, like me, you’re a bass player, it’s likely that you’re already familiar with the Ashdown brand and its iconic but, in truth, almost completely gratuitous signature illuminated VU meter. You may even own one of the company’s backline products or have used one in a rehearsal studio somewhere. And although Ashdown do manufacture products aimed at six‑string guitar players (and, actually, a whole bunch of other often attractively idiosyncratic musical bits and pieces), it’s as a purveyor of bass backline for which the company, founded by Mark Gooday in 1997, are best known. But now, and much to my surprise, Ashdown have added a range of four active nearfield monitors to their catalogue — and they are really intriguing. The range comprises two two‑way, compact, closed‑box monitors, the larger of which sports twin bass/mid drivers in a D’Appolito format, and two similarly configured but slightly less expensive reflex‑loaded monitors.

The Ashdown monitors were announced in early 2021, but the Covid pandemic and the “frictionless trade” that’s followed the UK leaving the European Union delayed their arrival in the flesh. I’m now writing this with a pair of the smaller, closed‑box NFP‑1 models, one on either side of my DAW on my monitor shelf — illuminated VU meters and all. The NFP‑1 is a genuinely compact little monitor, not far off BBC LS3/5a dimensions. It’s built around a nominally 130mm bass/mid driver and a 28mm soft‑dome tweeter. Both drivers are sourced from Italian specialist manufacturers Sica. Sica drivers are more often seen in PA and backline products, including some Ashdown bass cabs and combos, than in studio monitoring or hi‑fi speakers, but the company are long established and generally very well respected for their transducer technology and engineering. Sica are an unusual choice for monitor drivers, but potentially a very smart one.

The NFP‑1 bass/mid driver incorporates a relatively conventional‑looking coated ‘paper’ diaphragm, however it features some distortion‑reducing refinements in its magnet system, and its diaphragm surround is unusual in that it comprises two small concentric roll elements rather than a single large one. As I’ve written before in these pages, the surround is where much of the heavy lifting is done in terms of the audio quality that any driver required to cover both bass and midrange frequencies can deliver. This is because the requirements of the surround at low frequencies, where it has to move forwards and backwards with as little damping and hysteresis as possible, are very different from its requirement at midrange frequencies, where it has to provide non‑reflective absorption of the mechanical energy travelling outward through the diaphragm. Getting the surround right in those terms is a challenging engineering task that demands no little skill, so the use of a complicated double‑roll surround on the NFP‑1 bass/mid driver suggests that the challenge has been acknowledged, and it augurs well.

The Sica tweeter incorporated in the NFP‑1 is a conventional‑looking 28mm‑diameter soft‑dome unit, incorporating a shallow waveguide element that will increase its axial sensitivity slightly and, at the same time, narrow its high‑frequency dispersion a little. Its 28mm diameter, rather than the more usual 25mm, appears to continue the trend that I’ve mentioned a couple of times recently for dome tweeters to get a little bigger. The advantage of a larger‑diameter tweeter is that it can operate to a lower frequency without increased distortion or thermal compression. The disadvantage is slightly more restricted dispersion above, say, 10kHz.

The crossover between the two drivers is at 3kHz with relatively steep 24dB/octave filter slopes and a little (100µS) delay added to the tweeter feed to ‘time‑align’ the output of the two drivers on the perpendicular forward axis. Electronics within the NFP‑1 are fully analogue, incorporating a Class‑A/B amplifier topology and a traditional linear power supply. The amplifiers are rated at 105 Watts for both mass/mid driver and tweeter. Intriguingly, the bass/mid amplifier of the NFP‑1 incorporates an optical compressor in series with the driver. Now, equipping a monitor with a compressor might at first thought seem a bit, well, ill‑considered, but its role in this case is simply to offer the bass/mid driver some ‘soft’ protection from overdriving. Furthermore, almost all monitors compress the signal as they get louder, in particular through voice‑coil temperature rise, so making a decision to add some more deliberate control of the process isn’t as leftfield as it might initially sound. Of course, I wouldn’t be writing in such terms about the NFP‑1 compressor if I thought it were significant subjectively, but I only felt I heard...