Do Arturia’s MiniFuses go off with a bang or fizzle out with a whimper?

When Arturia revealed the AudioFuse back in 2015, it made a statement. It was oozing with features and projected conscious style and functionality choices that raised eyebrows and nailed the desktop audio interface form factor. So, it is with a little bit of disappointment that I pull the cookie cutter forms of the MiniFuse 1 and 2 from their boxes. They appear on first glance to be the same as so many other entry‑level audio interfaces I’ve reviewed in these pages. I often wonder if the 1U form factor, favoured by audio interface manufactures, is prevalent because it’s popular or only popular because most of them are like that.

However, once the MiniFuse is out of the box and into your hands things start to brighten up. They have a nice metal surround and decent rubber feet to resist cable‑drag. The knobs are tapered, shaped and rubberised and have a solid, meaningful feel. The main large Monitor knob is a nine‑sided nonagon that feels nice beneath the fingers and those edges give you a little bit of positional feedback. The metal case makes them very solid and there was no give no matter how much I squeezed or poked the boxes. They would survive a drop, being bounced around in a rucksack and being trodden on.

So, they are not lightweight but they are also not heavy enough to pass my cable hang test. This is where I plug in some headphones and an XLR cable into each mic socket to see if the box tilts forward when on the edge of a desk — they both fail, but this is not uncommon and I should note that the MiniFuse 2 was able to stay still with a single mic plugged in. As soon as you plug cables in the back to your speakers, or if you place the interfaces further back so the desk takes some of the cable weight, then it’s all good.

In terms of physical differences between the MiniFuse 1 and 2, the MiniFuse 2 has two combi inputs for mic, line or guitar, whereas the MiniFuse 1 has a single combi input. The 2 also has the very welcome old‑school MIDI In and Out ports on the back. On the MiniFuse 1 you get a Direct Monitoring button for switching between software or direct monitoring whereas on the MiniFuse 2 you have a knob that mixes between software and direct sound plus a Direct Mono switch to let you listen to inputs 1 and 2 in mono rather than in stereo with one either side. Both interfaces get a six‑segment LED output level meter, +48V phantom power, single headphone output and a Hi‑Z switch for each input. On the MiniFuse 2 the +48V switch turns on power for both inputs rather than individually. The USB connection on the back is USB‑C and they come with a USB‑C to regular USB cable for which I’m grateful. One killer feature borrowed from the AudioFuse is that on the back there’s an extra USB hub socket into which you could plug such things as your MIDI controller, thumb drive or dongle.

A single input, as we find on the MiniFuse 1, never seems quite enough to me. There’s no singing and playing at the same time in any context. However, if you just want to record a synth then it’s great, or you just play guitar then no problem, or if you like to sing, rap, talk or capture sound with a single microphone then this will do the job. The MiniFuse 2 with the second input always feels like a safer bet giving you the ability to record two things at once, or just to monitor the playback of your synth while you’re singing. It makes more sense to me but be aware that the extra input, the monitoring, plus the MIDI I/O costs you an extra 5cm in width.

The specs are similar to the those of other interfaces in this class, with a dynamic range of 110dB and gain range of 56dB, and are capable of 24‑bit recording up to 192kHz.

Arturia tell me that they have a really cool ‘on‑boarding’ process to make for a flawless installation experience. When you plug in the interface a little folder pops up with a ‘Getting Started.html’ file that you are encouraged to click which will take you straight to the registration page where you’ll be able to access the included software and download the drivers. At the time of writing the interfaces have not been announced and the direct links were not live, so I wasn’t able to experience the process. However, any steps that intend to smooth out the installation of an audio interface is a great thing in my book.

The MiniFuse Control Center application is a little on the light side. You have buttons to switch the mic input to a guitar input with a nice graphic to show you what’s currently selected, and the +48V button. These buttons are also on the hardware. It has input monitoring meters which are definitely useful. There’s some input metering on the interface itself where you get a splash of level lighting the transparent indicator on the gain knob which is rather nice, and that turns red when it hits a peak level, but it’s great to have more detail in the app. But that’s it. No monitoring or mixing software, no way to tweak the levels of the inputs, outputs, or virtual loopback channels. It feels a little underserved, although we’re only talking about 1 or 2 inputs here so how much control do you really need?

I had no trouble monitoring and recording vocals and instruments at these lowest latency settings.

The available ASIO buffer sizes range down to a wafer‑thin 8 samples, offering an input latency at 44.1kHz of 1.68ms. A Safe Mode switch, which is engaged by default, keeps the output latency at 2.5ms for anything under 128 samples. With Safe Mode off it will go down to an impressive 1.5ms, giving a round trip of just over 3ms. With these numbers software monitoring becomes very comfortable and I had no trouble monitoring and recording vocals and instruments at these lowest latency settings. Pushing the sample rate up to 192kHz increased the lowest buffer size option to 32 samples but resulted in the same amount of latency. Studio One DAW expressed the opinion that using 192kHz was a really bad idea, especially if I added any effects and it would regularly hit maximum CPU usage and cause a click. Reducing the sample rate to more common levels would iron those things out. It was also much better behaved with Safe Mode enabled; those additional samples giving your computer just enough cycles to keep things together as plug‑ins were added and the extra millisecond or two really made little difference to the feel of the monitoring.

Arturia don’t mention anything about the preamps being specially made or modelled on something famous and they sound reasonably good to me. There’s a little bit of background noise on the guitar input but the mic inputs are nice, clean and nothing to write home about.

When playing virtual instruments it was a bit fussier and the lowest settings resulted in a few clicks and pops. Scaling back up to 128 samples gave everything the space needed for perfect playback and that still rolled in at under 5ms output latency. Even with quite intense projects the latency performance of both interfaces was impressively respectable. So, yes, these drivers are quite snappy. 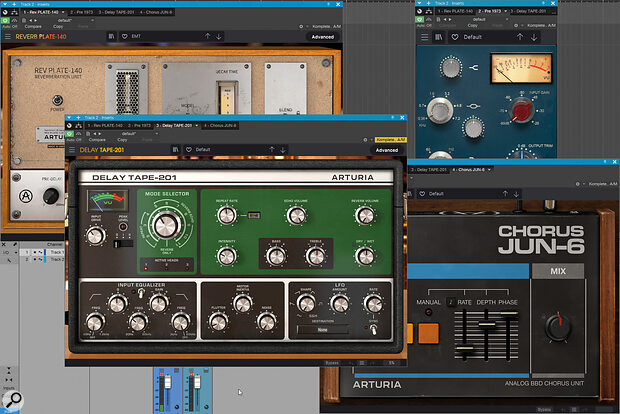 The included Arturia plug‑ins could justify the price of admission alone.

Naturally the MiniFuse comes with a bunch of third‑party software including Ableton Live Lite and Guitar Rig 6 LE, plus a short‑term subscription to Splice and a more dangerous one to Auto‑Tune Unlimited. However, what really sets this software bundle apart are Arturia’s own plug‑ins. Along with the useful Analog Lab Intro bunch of instrument sounds you get the Pre 1973, Rev PLATE‑140, Delay TAPE‑201 and Chorus JUN‑6. These are full‑version premium plug‑ins that are worth nearly €400 if you bought them separately. In fact, if you were in the market for more than one of these plug‑ins then picking up a MiniFuse 1 is by far the cheapest way to obtain them.

The Pre 1973 is based on the Neve 1073 preamp and is exactly what you need to add some character to the rather vanilla MiniFuse preamps. With the low latencies on offer you can monitor directly through the Pre 1973 whether you’re recording vocals, guitars or synths. The PLATE‑140 is not impressive to look at but it emulates the EMT 140 and sounds really lush. TAPE‑201 is your Space Echo and there’s a lot to play with in this plug‑in including some alternative reverbs. And finally, the Chorus JUN‑6 is a great‑sounding emulation of the Roland Juno chorus and it makes everything sound rich and thick. These are excellent plug‑ins that turn the pricing of the MiniFuses into a bit of a steal.

The Arturia MiniFuse 1 & 2 are decent audio interfaces. They are not breaking new ground or pushing envelopes, but they come up to scratch in terms of quality, having the right features and being affordable.

The Arturia MiniFuse 1 and 2 are decent audio interfaces. They are not breaking new ground or pushing envelopes, but they come up to scratch in terms of quality, having the right features and being affordable. While they lack monitoring software they do have an internal loopback so you can route and record the output of one piece of software into another, which is vital for podcasting and live streaming. While the boxes are a little lightweight the metal case feels reassuringly survivable and have a very useful USB host connection for your MIDI controller. Those software effects add a significant amount of value to these interfaces and the performance of the drivers means you can use them when recording without too much trouble.

Arturia come up with a pair of decent entry‑level audio interfaces with familiar features and unexpectedly good plug‑ins.