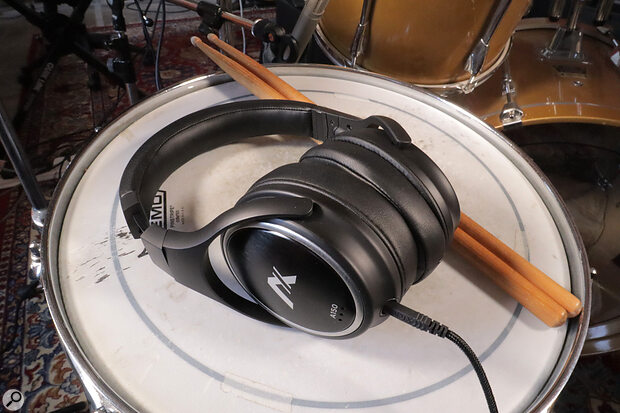 Having mastered the dynamic microphone, US company Audix turn their attention to headphones — with impressive results.

Mention the name Audix to engineers of a certain vintage, and it will conjure images of BBC‑spec British broadcast consoles from the ’70s and early ’80s. Today, however, the name is primarily associated with microphones, thanks to the unrelated but highly successful US‑based Audix company. Audix USA opened their doors in 1984 and quickly established a very loyal user base. Their drum, instrument and vocal mics are a popular and welcome sight on stages around the world, and although their studio mics perhaps maintain a lower profile, I’ve always found them to be of very high quality.

After 36 years specialising in microphones and related products, Audix have now branched out into the world of headphones. In many ways, it’s a natural evolution for a manufacturer of moving‑coil dynamic microphones, since the all‑important transducers are very similar in both cases; but it’s a crowded market, and there is a lot of strong competition.

The initial range of Audix headphones comprises four models. All are conventional closed‑back, over‑ear designs that use familiar moving‑coil technology, and all are passive, relying on physical isolation rather than electronic noise‑cancelling to blot out the outside world. The two ‘base’ models, as it were, are the A140 and A150, described respectively as “professional studio headphones” and “studio reference headphones”. The other two models in the range are “extended bass” derivatives of these, christened the A145 and A152 respectively. For the purposes of this review we received the A140, A150 and A152s, but all four models should be on general sale by the time you read this.

Apart from the number printed on the shell, all four models are externally identical, and follow a well‑established form factor. The elliptical earcups are attached to a rigid metal strip which slides into a semicircular, padded headband, allowing adjustment for different head sizes. The cups themselves can be rotated both horizontally and vertically, and contact with the head is made by replaceable pads which are pleasingly soft and deep. Extensive use of rigid plastic rather than metal makes them impressively lightweight, though it also means the look and feel is little different from many cheaper headphones. At any rate, I found them very comfortable; these are the sort of headphones you could easily forget you were wearing.

The A‑series headphones are supplied with but a single, straight cable. This has an attractive and very flexible braided coating, and attaches to the base of the left earcup using a mini‑jack. A second mini‑jack at the other end can be enlarged with the ubiquitous screw‑on adaptor. Given that these are being marketed as studio headphones, though, I can’t help thinking that many people would wish for something a bit longer in the cable department. At 1.8m, the supplied cable is perfect for laptop mixing but too short for use in the live room. Every good studio should have cable extenders in any case, but if yours doesn’t, Audix do offer a 1.5m extension cable in the same style as the included lead, for $39.

The A‑series phones are small and light enough to be easily portable, and ship with a genuinely useful semi‑rigid zip case rather than the cheaper drawstring bags beloved of too many manufacturers.

An important consideration with closed‑back headphones is isolation. For many studio and location‑recording applications, the ideal headphones both block external noise from reaching the ear, and contain the sound they’re reproducing so that our recordings are not blighted by click‑track spill and the like. The A‑series phones are not particularly special in this regard, possibly because the earcups are not in fact completely sealed: each has a discreet row of three holes in the outside casing, which presumably serve as vents. They are fine for most studio work, but if maximum isolation is your main goal, you’d be better off with on‑ear phones like the Sennheiser HD25‑II; just be prepared to pay a price in terms of both comfort and sound quality.

At this point, you may be wondering what the difference between “professional studio headphones” and “studio reference headphones” actually amounts to, since all of the four models are outwardly the same. The answer, it seems, is a centimetre: the A14x models use a 40mm driver, while that employed in the A15x models is 50mm in diameter. This, in turn, has various consequences that are more or less audible. The most obvious is that although they present a very similar nominal impedance (32Ω for the A140 as against 30Ω for the A150), the A150 and 152 are some 6dB more sensitive than their counterparts. In practice, though, the A140s are still easy to drive loud from any source, so this isn’t a problem.

I don’t know whether the concept of “studio reference headphones” really bears close examination, and inasmuch as one might consider a pair of headphones to be a reference monitoring tool, the gold standard would probably be a high‑end pair of open‑backed headphones such as the HEDDphones, Sennheiser HD800 or Audeze LCD‑X. Be that as it may, for a pair of mid‑priced closed‑back headphones, the A150s surprised me. Subjectively, their frequency response struck me as noticeably flatter than that of comparable models such as, for example, the Austrian Audio Hi‑X55; there is a hint of a push in the treble and perhaps a touch of richness in the lower midrange, but the overall sound is remarkably clear and open. They present the stereo field in as natural a way as closed‑back headphones are ever likely to, and I couldn’t detect any hint of splashiness, ringing or other problematic behaviours. If I had to mix on closed‑back phones, I can’t think of another model in the same price range that I would choose over these.

If I had to mix on closed‑back phones, I can’t think of another model in the same price range that I would choose over these.

As you’d expect given their physical similarities, there is a strong family resemblance between the sound of the A140 and A150. Once level‑matched, in fact, the A140s sound really quite similar to the A150s, with many of the same strengths. The tonality of the A140s is a shade more brash, with the upper midrange coming through more strongly at the expense of the bass and lower midrange, and perhaps sounding a touch more ragged, but these are still excellent headphones for the money. Calling them “professional studio headphones” rather than “studio reference headphones” suggests they are designed for tracking rather than mixing, but at the price, I think they’re pretty strong all‑rounders.

What, then, of the “extended bass” variant, the A152? First of all, let’s be clear that the A150s don’t seem to want for bass extension, and indeed the specs claim a frequency response down to 10Hz, though no tolerances are given. So it’s possibly misleading to describe the A152s as having a more extended bass: rather, they just have more bass, as though a shelving EQ had been inserted at about 150Hz. This, of course, makes them less ‘flat’ than the A150s, and thus arguably a less obvious choice for mixing, though I found it reasonably easy to adapt. But I can certainly imagine other studio roles where this might be useful. Many singers, for instance, rely on bass notes as an aid to accurate pitching, while other musicians will often benefit from hearing a bit of additional heft from the kick drum or bass guitar as a timing reference.

Audix may be new to the headphone market, then, but they have a wealth of experience in designing moving‑coil drivers, and it shows in these A‑series models. There are no real surprises or radical innovations on offer here, just very good implementations of well‑established design principles. For a new product range to succeed in such a competitive market, it needs to be very strong indeed, and that’s exactly what Audix have delivered. If you are on the hunt for a new pair of studio headphones, be sure to try these out before you make your choice!

Competition in the world of headphones is fierce, and there are many other models designed for studio use within the same price brackets as the A140 and A150. If you’re in the market for the latter, you should also consider the Focal Listen Professional, Austrian Audio Hi‑X55, Audio‑Technica ATH‑M70x and Shure SR40, among others, while rivals to the A140s include the Audio‑Technica ATH‑M50x, AKG K371, Beyer DT770, Sennheiser HD300 and Yamaha HPH‑MT8.