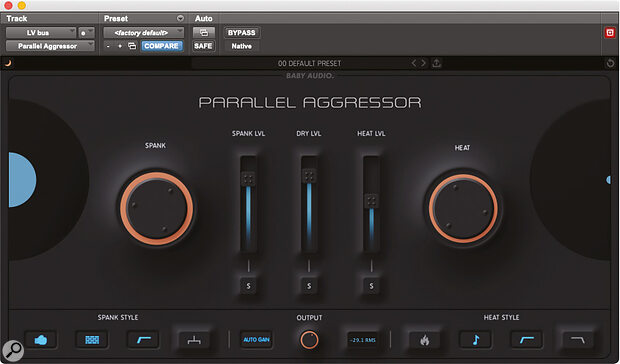 If you loved Baby’s I Heart NY but wished it were more tweakable, you really should check out Parallel Aggressor.

Many plug‑in developers have embraced the idea of plug‑ins with minimal control sets, and one of my current favourites is Baby Audio’s I Heart NY. Reviewed in SOS March 2020 (https://sosm.ag/baby-audio-iheartny), this presents what is from the user’s point of view the simplest possible implementation of parallel compression. The only controls on offer are compression amount, wet/dry mix and output level — and it’s remarkable how effective the resulting plug‑in is.

I’ve rarely wished for more control from I Heart NY, but perhaps others haven’t felt the same way, because Baby Audio have now released an expanded implementation of the same concept. Parallel Aggressor is still designed to be super‑simple to use, but provides options for shaping the character of the compression, and doubles the fun with a saturation algorithm alongside it.

There is still no direct control over time constants, threshold or ratio, but the Spank (compression amount) dial is now augmented by four Spank Style buttons. The boxing glove introduces extra punch and the brick wall provides extra ‘smack’, while the other two introduce a fixed high‑pass filter and mono fold‑down into the compressor path only. These controls are mirrored on the opposite side of the interface by a dial controlling the temperature of the Heat (saturation) and associated buttons for ‘extra hot’, ‘tone’ and low‑ and high‑pass filters, again affecting only the audio passing through the saturator.

The relative levels of the compressed, reheated and dry audio are balanced using faders, each path also having a solo button. There’s also a global Output Level control and a button marked Auto Gain, which is supposed to preserve a constant output level regardless of the balance of the faders. This works, but it isn’t 100‑percent effective, and would be more useful if it also applied when bands were soloed.

Parallel compression and distortion seem like pretty natural bedfellows, and Parallel Aggressor certainly makes it easy to balance the two. Compared with I Heart NY, the additional controls should make the compression more versatile, but in practice I found that the one thing I couldn’t do was make it sound exactly like its simpler predecessor. Regardless of the settings, for example, Parallel Aggressor’s compression tends to make drum transients sound ‘clicky’, in a way that I Heart NY doesn’t.

However, the different Smack Styles provide useful tone‑shaping options on other sources such as vocals, and the ability to blend in a bit of harmonic coloration makes numerous flavours of ‘attitude’ available. The value of the saturation would be even greater if you could freely adjust the filter cutoff points, but obviously that would undermine the simplicity of the plug‑in. Overall, I think Baby Audio have struck a very good balance between immediacy and versatility with Parallel Aggressor, though in many cases I still turn first to I Heart NY.