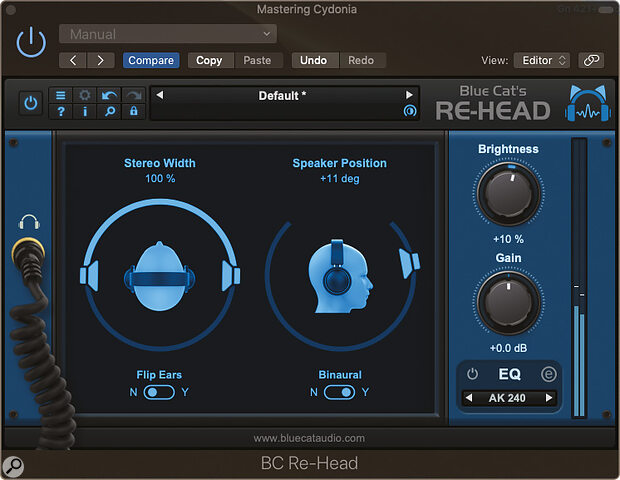 The experience of monitoring the same mix on both headphones and loudspeakers reveals that each system provides a rather different listening experience. One of the key reasons for this is the difference in separation. When listening to a stereo mix on speakers, the sound from each speaker reaches both ears, with some delay and head‑shadowing effects, while headphones provide near perfect separation between the left and right channels.

Blue Cat’s Re‑Head plug‑in aims to make working on headphones feel more like working on loudspeakers. The company cite the benefits as a more natural feel and less listener fatigue. While the principles upon which Re‑Head is based incorporate aspects of binaural processing, Blue Cat stress that this is not a 3D mixing tool: Re‑Head won’t move things around your head, but rather aims to modify the EQ and stereo response to provide more of a loudspeaker experience. The reason EQ is involved is two‑fold: human ears have a different frequency response depending on the angle of the approaching sound; and in some cases it may be necessary to compensate for the imperfect frequency response of specific headphones.

Supporting all the major plug‑in formats, including AAX, on Mac OS and Windows, Re‑Head loads with a fairly straightforward scalable GUI, though enabling the EQ view doubles the width of the window to show the EQ curve alongside. Within this expanded view, the audio spectrum can be shown as a dynamic spectral analyser or as a spectral display, in grey scale or colour, as you prefer.

The second head view allows for adjustment of the virtual speaker position above or below the listener’s ear‑line.

A main toolbar accommodates bypass, general plug‑in functions and preset management, while the main section of the window is taken up by two views of the head. The first provides control over stereo width, which at 100 percent gives full separation between the two channels, but dropped to around 70 percent provides a similar level of crosstalk to studio monitors. At zero the signal becomes mono. A flip control allows for swapping the left and right channels.

The second head view allows for adjustment of the virtual speaker position above or below the listener’s ear‑line, along with a Binaural switch. Blue Cat say that the ‘height’ effect can be used to make miked guitar cabs sound more natural to the player when tracking, but it also emulates the way studio monitors might be placed above you angled downwards, or below you angled upwards, making it easier to match the sound of your own speakers; you can hear the tonal change as you adjust it. You might wish to set Binaural to off to ensure that the plug‑in does not affect the stereo balance, though sound localisation is likely to sound more realistic with it engaged, and it may feel more natural that way when monitoring while tracking.

A pop‑out section of the window provides a detailed graphical representation of the EQ curve. As well as manipulating the curve in the usual way, you can import impulses and curves from other Blue Cat plug‑ins.

A quick way to match the sound of your headphones to that of your studio monitors is simply to use the Brightness control located above the Gain knob. This delivers an approximate fix, but for greater accuracy the EQ section offers a combination of high‑ and low‑cut filters, shelving high and low filters and three parametric‑type filters. These can either be dialled in based on the spec sheet of your headphones or adjusted by ear. There’s also a list of EQ reference curve presets based on popular studio headphones, plus the ability to import impulse responses that can be used in combination with the filters. Reference curves may also be copied and pasted from the Blue Cat FreqAnalyst Multi plug‑in. Imported IRs can be adjusted using the Shift and Mix controls so that their response combines with the filters to provide the desired tonality.

Another alternative to using the EQ and/or headphone compensation impulse responses alone is to pick one of the presets that sounds closest to the way your monitors sound using your own headphones, then tweak the EQ manually to get the sound to match as best you can. Of course you can load any type of IR, so you can add the character of a particular room.

Re‑Head should be the last plug‑in in the monitoring chain, though it may also be used to process performer headphone mixes to make them feel more comfortable. It should not be used when monitoring via loudspeakers and if it is inserted into your main mix bus, you need to remember to bypass it when bouncing the mix to stereo.

While it’s not as ambitious as something like Waves’ Abbey Road Studio Three monitoring plug‑in, which follows your head motion and provides a choice of the three sets of monitors in that studio, Re‑Head still makes monitoring via headphones for a long period of time more comfortable, and it provides a good approximation of working on speakers.

I wouldn’t personally use a system of this kind to sign off a final mix (you really need to check it on speakers and conventional headphones), but I can see benefits in this virtual‑speaker approach when tracking, or when doing the legwork for a mix in situations where speakers simply aren’t an option. Blue Cat are to be applauded for making this plug‑in so easy to use.

For alternative speaker‑like experiences when listening on headphones, check out Waves’ Abbey Road and Nx, Sonarworks Reference 4, ToneBoosters Isone and 112dB’s Redline Monitor, amongst others.

€49. Discounted price of €39 when going to press. Prices include VAT.