Boss got so much right with their DD‑3 that it has remained on sale ever since it launched in 1986. But this year they’ve updated it and introduced the more adventurous DD‑8.

Launched in 1986, Boss’s DD‑3 is a genuine classic: a straightforward workhorse of a pedal that sounds clean, is easy to use and small enough to fit onto a pedalboard. To make setting up easy, Boss included a range switch to the right of the delay Time control, which provided three delay‑time ranges (12.5‑50 ms, 50‑200 ms and 200‑800 ms) or a short loop function that could recirculate a short (200‑800 ms) section of sound. The other controls were the now‑familiar Effect Level and Feedback. As with most Boss compact pedals, a 9V battery can be fitted under the pedal by releasing the thumbscrew at the back of the moving pedal section; an alkaline battery will give around 11 hours of use, though a PSU is probably more practical in the long term. 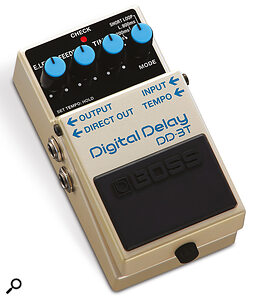 Boss got so much right that the DD‑3 has remained on sale ever since it was launched, but this year they’ve updated it. The new DD‑3T functions exactly as the original, but the footswitch normally used for bypass can now be held down a short while to switch it to tap‑tempo mode, which was the one key feature missing from the original. The case has also sprouted an extra jack to take an optional momentary action footswitch. On the left of the pedal are the Output and Dry jacks, just like the original. If the dry jack is used, the output then delivers wet only, which makes for easy wet/dry splitting into two amplifiers.

“Surely Boss could have done more with this revamp?” I hear you ask. Well, they did: released in tandem with the DD‑3T was the more adventurous DD‑8. Again, this can be powered by battery (about five hours’ life with an alkaline battery) or a PSU. This model includes A and B jacks for the inputs and the outputs, allowing for true stereo operation, but it can also be used for mono, mono‑in, stereo‑out, wet/dry outputs, and wet out only. The pedal adapts its routing automatically, according to which sockets are connected.

Eleven switchable modes emulate different delay types, including Digital, Analogue and Tape, a Reverse delay, Modulated delay, a Shimmer delay and two less familiar effects, namely Warp and GLT. Warp increases the delay feedback and level when the pedal is held down, to create a freeze‑like swell, while GLT creates what I can best described as ‘chopped repeats’ when the pedal switch is pressed, with the Feedback knob setting the effect’s depth. There’s also a new Warm delay type for softer repeats, and a delay/reverb combination. All this is selected from the fourth rotary switch.

The first three controls take on the familiar roles of Effect Level, Feedback and Time. Normally the maximum delay time using the Time knob is 800ms or, in GLT mode, 400ms, but going in via jack A and out via jack B doubles the time. Furthermore, using an external tap‑tempo switch allows delay times of up to 10 seconds, and a settings mode lets you set the Tap division value. 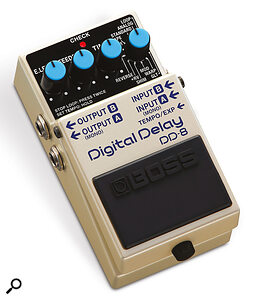 A rear‑panel switch selects between hard bypass and maintaining the delay tails. A routine that involves powering up and plugging in jacks allows the output mode to be set so that the Analogue delay has an enhanced stereo width while the Standard delay provides independent delays for each channel. Once the setting has been saved, it is retained after powering off.

The looper has a maximum loop time of 40 seconds (20s in stereo). This can be controlled entirely from the pedal switch (the status LED changes colour to show what mode you’re in) but external control is also possible via the Tempo/Exp jack. This TRS socket can support two switches or one expression pedal, and the latter can access level, feedback or delay time, or all of those simultaneously. The user can set the maximum value for each. In looper mode, two footswitches can be used to control the looper’s stop and clear functions.

A new Twist function, triggered via an external footswitch, is available in each delay mode, and produces what Boss describe as ‘soaring’ echo sounds, by introducing a sense of rotation. It produces an odd spiralling effect that I might want to throw in once during an evening to wrong‑foot the audience, but in all honesty probably wouldn’t use a lot.

Warp increases the delay feedback and level when the pedal is held down, to create a freeze‑like swell.

In Warp mode, everything you play is recycled for as long as you hold down the footswitch so you can build up some very complex textures. However, it doesn’t function as a more conventional freeze effect where, typically, you can hold whatever is in the buffer as a pad and then play over the top without adding to the infinite‑repeat layer. Also, unlike some delay units on which the delay time control adjusts the system clock rate, you don’t get a completely smooth speed change when adjusting the delay time knob during performance, so the dub fraternity would need to look elsewhere if that’s a deal‑breaker.

The DD‑8 should easily cater for most people’s delay needs. Sonically, it’s everything you’d expect from a Boss pedal in terms of low noise and clean, predictable operation. In Reverse mode, you can dial in a wet‑only sound if you wish to by maxing out the mix control — perfect for those live, backwards guitar solos. The Shimmer effect, which is pitched up by one octave, fades in just after the normal delay repeats creating a smooth, pseudo string pad sound in the background. The normal delay is typically clean while the Warm, Tape and Analogue modes are a little more murky and organic‑sounding. I particularly like the modulated delay, but that delay/reverb combination is also extremely useful. Overall then the DD‑8 offers the kind of features we’ve come to expect from much larger‑format pedals in a Boss compact pedal format, and it costs no more than some software delay plug‑ins. Recommended.