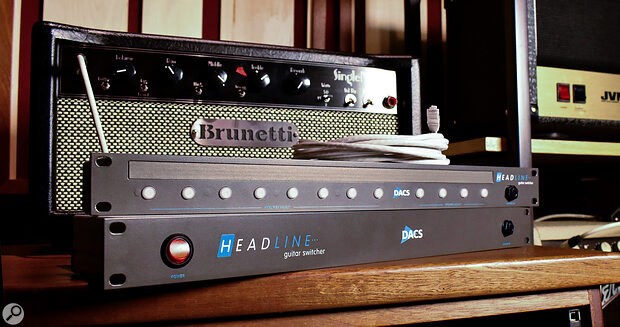 The HeadLine could save you precious session time when indulging your inner tone‑hound.

The HeadLine Guitar Switching System came to be because professional guitarists approached DACS asking for a quick and easy way to compare and reconfigure their boutique amps and cabinets without manually swapping the cables. It comprises two rackmountable boxes, which connect via a CAT5 or 6 cable, and DACS say they’ve tested cables of up to 20m. The Selector unit should be installed within easy reach of your listening/playing position, and the Relay Switcher is intended to live nearer the amps and cabs.

With your guitar and up to eight amps and four cabinets connected, you press the Selector’s buttons to set the amp/cab combination, and you can route an amp’s output to two cabs simultaneously. Both units have a tuner output, which could also be used as a non‑switchable feed for combo amps if you like to experiment with multi‑amp setups. A dummy load is presented to any amp not routed to a cab, so you can leave tube‑amp heads on without fear of blowing the output transformers. The input signal and earth/screen on unselected amplifiers are linked, grounding the signal to ensure there’s no hum or interference.

Everything’s very clearly labelled but DACS also provide a handy diagram of a typical setup to help you get started. Handily, the Switcher’s front panel has a magnetic strip so you can attach the supplied write‑on labels to keep track of your setups.

To test the HeadLine, I connected the inputs and speaker outs of three amps to the Switcher, and ran long speaker cables from the control room to the live room. Turning on the Selector, the four cab selector buttons flashed blue to warn that no speaker was connected (or of a short circuit). After I connected two cabs, the selected cab button was brightly lit, that for the unselected cab dimmed, and those for unconnected sockets were unlit.

I hadn’t fully appreciated the effect the HeadLine could have on the creative process.

Plugging a guitar into the HeadLine, I started setting up a tone on amp one: a Fender Supersonic. I also tried several stompboxes, connected between the HeadLine and the Fender so they’d only be routed to the Fender. After settling on a decent sound, I pressed the button to switch to a Brunetti SingleMan amp. After a click of relays and only brief delay, which DACS say “gives the amplifier a chance to settle, and any reverb to dissipate before disconnecting its output”, the Brunetti ‘came online’.

With my amp and pedal sounds already dialled in, I was able to compare amp and cab sounds easily from the comfort of the producer’s chair, and it struck me that I hadn’t previously realised just how different our Orange 4x12 with Celestion Vintage 30s and the Zilla 4x10 with Celestion Greenbacks sounded!

I approached this review loving the concept, but I hadn’t fully appreciated the effect the HeadLine could have on the creative process. At this price, it’s a luxury purchase for an amateur recordist or guitarist, and there are cheaper options for switching between only two amps and a single cab. But in a professional studio having things ‘ready to go’ is a must, particularly when working with a client; the HeadLine could easily pay for itself in that context. Just as importantly, it means that when you’re trying to find that ‘just right’ tone combination, you won’t kill the buzz by scrabbling around with cables for 10 minutes, saying “sorry, won’t be long!” Recommended.

For switchers with similar functionality, also check out the Ampete 88S Studio and the KHE Audio ACS series, amongst others. If you need only to hook up two amps and one cab, there are more and cheaper options, including the Radial Tonebone Headbone VT.

If you use several amps and cabs regularly, the HeadLine will allow you more fun time in the tone zone!