Described by manufacturers SoundTech as a 'soundcard in a cable', the LightSnake USB comes in instrument and microphone versions — there's a quarter-inch jack or XLR plug on one end and a USB connector on the other — and you can also now get an RCA and an iPod version. 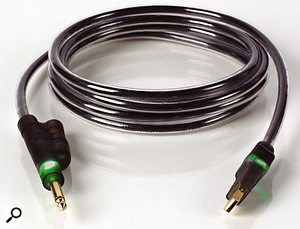 The Lightsnake USB offers just about the most straightforward way you could imagine of getting a guitar signal into your computer.The LightSnake works with Mac (OS 9 or 10) and PC (most Windows versions from 95 to Vista). A Sony 30-day demo software disc (including Sound Forge, Acid and Vegas) also comes as part of the package, to help you get started. An ASIO driver should be available by the time you read this, though it wasn't shipping at the time of this review.

I tried the guitar version and it couldn't be simpler: the USB end plugs into your computer and the jack into your guitar (or bass). The jack end includes an additional socket, piggy-backed onto the plug, allowing you to take a direct 'thru' feed into a guitar amp, for latency-free source monitoring — although if you do this you have to remember to disable software monitoring, or turn down the level.

A green LED, which glows to show that the cable is connected and powered up, is embedded in each end of the cable, and it flashes to indicate when it has been recognised by the host software.

The 16-bit A-D converter operates at sample rates of 48 and 44.1kHz, and HSDL (Host Side Data Loss) Noise Reduction is included. I'm unfamiliar with this system: it is said to minimise noise when recording, but there's no explanation of how it works and it may be as simple as a software noise gate.

The 'soundcard in a cable' claim is only half true, as you only get the input part of a soundcard, not the output — you have to use your existing system audio output for that, and when I tested it with Apple's Logic Express this entailed setting up an Aggregate Driver combining the LightSnake and the on-board I/O, so I could play back what I'd recorded.

A gain stage precedes the converter, so the recording level is adequate for most types of electric guitar and bass, without risking overload on signal peaks. However, because the gain setting is fixed and needs to accommodate hot humbuckers without distorting, the recording level from my Strat was fairly low, with peaks at around -20dB — which meant that my recording resolution was equivalent to 13 of the 16 available bits. Normalising the recording to bring it to maximum level produced a subjectively decent sound without undue noise, so it shouldn't be a problem for basic demo work or recording.

Although the LightSnake, at £30, is definitely a budget device, it is capable of very respectable results. I wouldn't choose it for serious recording, but for no-hassle demos or working on a laptop it offers a very practical solution, and the 'thru' jack is a good idea too. Because the cable draws its power directly from the USB socket, it is very simple to set up — you literally plug, then play. Paul White

An easy way to get your guitar sound into your computer. Though cheap, it is capable of good results.

Vox are well-known for their amp-modelling technology, but I didn't expect them to come up with anything like this! Priced at £35, making them the perfect impulse purchase, the AmPlug range comprises three models of headphone guitar-amp, each of which has a specific amp voicing. They plug directly into the output jack of your guitar (and yes, they do fit a Strat-style jack), providing a mini-jack headphone out and a separate jack input for your MP3 player, just in case you'd like to play along with external music. 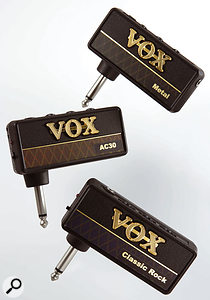 The Vox AmPlug: a big sound from the smallest of amps!The three styles are Vox AC30; Classic Rock, which is based on a popular UK-made amplifier head; and Metal, which models a US high-gain amplifier. You might expect such a product concept to be based around digital modelling, but in fact the circuitry is all analogue, which means that you can expect a long battery life (up to 15 hours) from the two included AAA cells that power the unit.

The AC30 unit has two separate gain stages, while Classic Rock has four. Metal combines two ultra-high gain sections with a mid-cut filter, and Vox claim that the circuit response of the original amp is simulated to a high degree of accuracy, even down to the way the tone circuits sound and the way the sound cleans up when you back off the guitar volume control.

Each model has three thumbwheel controls for gain, tone and volume (you'll need to control the MP3 input level at source). There are no effects, but the basic sound is actually very authentic and musically satisfying, unless you turn the level up too far — in which case some clipping is evident and the sound tends to get a bit gritty. There's a bit of background hiss, especially at higher gain settings, but with care you could actually record directly from the output and get a usable result.

My favourite amongst these units is, quite predictably, the AC30 — which sounds very much like the AC30 top boost model of my Vox AD30VT amp — but they all do exactly what they are supposed to do and are a lot of fun to play. There's not a great deal of flexibility, but for general practice or even demo recording (where you can add your own effects later) the concept is excellent.

There are, of course, now numerous headphone-amp solutions out there, but this range embodies the distinctive characters of the amps being simulated. If you want all the bells and whistles, you'll have to spend around twice as much on a Pocket Pod or something similar, but the AmPlug is perfect if you're looking for a gizmo that you can put in your guitar case as a means of filling those quiet moments. Paul White

A range of very small and surprisingly good-sounding headphone amps based on popular guitar amplifiers.