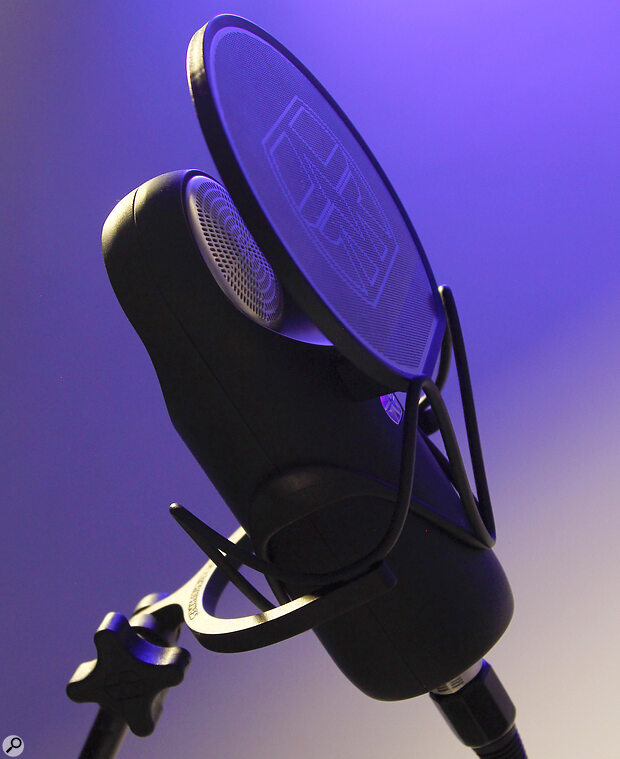 The newest mic from the Aston stable offers remarkable performance at a surprisingly low price.

There was a time when dynamic mics were typecast for live use, drum miking and sticking in front of guitar amps. Aston helped changed that preconception with their Stealth microphone, a dynamic model that challenged traditional capacitor mics in their usual studio roles, including vocal recording.

While some mic companies produce new models as often as they change their shirts, Aston take a more considered approach. To date they offer the Spirit and Origin large‑diaphragm models, the Starlight ‘laser‑guided’ small‑diaphragm model, the Stealth active dynamic model and now the attractively priced Element. The one thing they all have in common is that Aston make use of industry listening panels before arriving at the final design for a microphone.

In the case of the Element, they opened the listening stage of design up to the general public, and garnered the opinions of over 4000 musicians, engineers and music producers. All took part in multiple blind listening tests based on recordings made using multiple microphones on multiple sources. The results were eventually narrowed down through further rounds of tests that included several differently voiced versions of the Element. The whole process took 18 months of R&D and three months of public listening tests, during which time the mic was auditioned alongside models from major competitors such as Blue, Rode, AKG, Audio‑Technica and Neumann.

Like the Stealth model, the Element is an active moving‑coil microphone, and combines a fast transient response with an extended low end, though it doesn’t have the switchable voicings of the Stealth model. The Element’s capsule is based on something Aston call Ridyon capsule technology, which gives it a tight cardioid pattern. It is larger than usual at a full 1.5 inches in diameter, but apparently has a very lightweight diaphragm and coil (see 'The Designer Speaks' box).

There’s nothing conventional‑looking about this microphone, and despite the low cost, it comes with a custom shockmount and bespoke metal‑screen popshield. Rather than using the familiar ‘sleeve’ body design, the Element housing is a two‑part casting finished in black, with a shaped head sporting round silver grilles front and back that give the mic something of a retro, ’50s sci‑fi look while also reducing the mic’s tendency to popping (an important consideration given its extended low‑frequency capability). At the rear of the mic is an inset rubber strip bearing the Aston Microphones name, which hides two screws that hold the two halves of the mic body together. Inside is a UK‑built, through‑hole circuit board populated with discrete components in a transformerless, symmetrical configuration using two transistors.

The popshield fits to the microphone body magnetically, and it will only attach in the correct position so there’s no chance of error. I’m told that the magnetic attachment system was specifically designed so as not to affect the magnetic operation of the capsule. The popshield construction is worthy of note as it uses an elegant, precision‑machined metal grille adorned with the Aston logo, set into a rigid plastic surround that also incorporates the shaped mounting block holding the fixing magnet. This snaps into place just above the backlit Aston logo on the microphone, which also designates the hot side of the mic. If you are recording an instrument that doesn’t need it, the popshield can be attached to the mic upside down without fouling the suspension, keeping it out of the way of the capsule but close at hand for when it’s required.

Far from being a gimmick, the logo light, which actually forms part of the preamp biasing circuit, indicates that phantom power (which is necessary to power the active electronics) is being received by the microphone. As moving‑coil microphones operate on an electro‑magnetic principle, they are susceptible to electro‑magnetic interference, particularly hum, but the Element employs a partially active humbucking circuit using a network of phase‑inverted coils to cancel any interference from electro‑magnetic radiation.

The resilient cradle suspension, made from TPEE plastic, is also designed specifically for the Element and has two small moulded tabs that click into slots in the sides of the mic body. It is necessary to ensure these have clicked home fully to keep the mic secure, after which the cradle can be used at any angle without the mic slumping. The complete Element kit comes in sturdy cardboard packaging and includes a 10‑year warranty.

The Element In The Room

The frequency‑response curve that garnered the most positive reaction during the listening tests, and which was adopted for the final production version, was flat down to 40Hz before rolling away, exhibited a very small dip at around 2.7kHz, and had just a hint of presence lift centred on the 7kHz region. Surprisingly for a dynamic mic, the response extends to over 20kHz before falling away.

The noise figure is impressive at under 4dB A‑weighted, which Aston say makes it one of the quietest studio mics available. No sensitivity figure was available at the time of writing, but comparing it with another microphone of known sensitivity, the Aston seems to put out around 12mV/Pa — which is higher than a typical passive mic, as you’d expect given the active electronics. Though there are no pad or filter switches, the mic is happy with SPLs up to 132dB, which should cover most eventualities. What the frequency‑response figures suggest is that when using the mic for recording vocals, you might want to use a high‑pass filter, either in your preamp or DAW, to tailor the low end as this mic has impressive bass extension.

Most noticeable, however, is the tonal character of Aston’s approach to capsule design. Without the HF resonances that colour many capacitor mics, the top end has, to my ears, more of a ribbon‑like smoothness but without any loss in high‑frequency detail or level. Indeed, the overall sound feels very true to the source. As with all cardioid mics, there is a degree of proximity effect and if you start working too close to the popshield this can become quite noticeable — the best working distance when recording vocals seems to be about 25 to 30 cm from the mic. The recorded result responds well to EQ, either to add air or to tame the low end, and because this microphone doesn’t impose too much of its own signature on the sound it should suit a wide range of voice types and vocal ranges. Higher female voices can challenge some capacitor microphones as they can excite unwanted resonances but that’s not an issue that should arise with this dynamic capsule design. Having said that, if the mic is for use with a particular vocalist, then do try it up against whatever other mics you can audition, as you never really know which mic is going to work best for a specific voice until you try it for yourself.

The Element is like a breath of fresh air in  the affordable microphone market.

On acoustic guitar, the result came over as solid but detailed and without any of the nasal character that some dynamic mics impart on the sound. I found I needed to use a little ‘air’ EQ to get the same sparkly top end I’m used to hearing from my usual capacitor mics, presumably because they have more pronounced presence peaks, but I had no problem in drawing it out.

I was also keen to see how the mic worked on electric guitar, as I’m always looking for that ‘Goldilocks’ zone between the slightly nasal honk of a conventional dynamic mic and the brittle edge of a capacitor. I think I might have found it here, as the recordings I captured, both clean and overdriven, came across with the same kind of character I was hearing from the amp itself, without added grittiness but still with plenty of bite. Again, the results turned out to be gratifyingly malleable when treated with EQ to tailor the sound. While I wouldn’t claim this to be the definitive electric guitar amp mic, it certainly deserves further exploration in this role, especially given its attractive price.

The Element is like a breath of fresh air in the affordable microphone market: a capable all‑rounder that won’t disgrace itself when heard alongside much more expensive alternatives. It has its own sonic character, which I’d characterise as full, smooth and detailed, but those attributes make it surprisingly versatile. It certainly sounds a little different from a typical moving‑coil dynamic microphone, so Aston’s novel approach to capsule design has clearly paid off in terms of performance/price ratio. I was also impressed by the build quality, by the included suspension and the elegant magnetic popscreen, all of which are well thought out and add considerable value.

The Aston Element’s unusually extended frequency response for a dynamic microphone owes much to recent advances in material science, says designer Trevor Szynk: “The high‑frequency performance of vintage large‑diaphragm moving‑coil microphones was inferior due to the physical mass of the paper diaphragms they employed. They also had magnets the size and weight of a house brick. The technology has advanced considerably in both of these areas, and it is now possible to manufacture a moving‑coil microphone with a diaphragm as light as its condenser counterpart, and a high‑efficiency magnet compact enough to fit into a standard microphone form factor.

“The magnet in the Element is more powerful than the ones found in most high‑frequency speaker drivers. With the magnet being as powerful as it is, the coil can use much less wire and therefore can be made much lighter than other moving‑coil microphones. The mylar diaphragm, coupled with the lightweight, low‑impedance coil, results in an excellent transient and high‑frequency response. The frequency response of the Element extends far beyond 20kHz and there’s still useful output below 20Hz.”

Szynk tells us that the electronics also play an important role in the mic’s performance: “In order to use such a low‑impedance transducer, it was necessary to use active circuitry to achieve the desired output level. The Element uses only one stage of parallel, single‑ended Class‑A amplification, employing high‑current output transistors to maintain a low output impedance and less self‑noise than a conventional microphone preamp circuit. The amplifying section of the circuitry consists of only five electronic components, a much purer signal path than is normally seen in this type of circuit.”

The Element is a new take on the moving‑coil microphone concept that overcomes many of the limitations of conventional dynamic designs, while also avoiding some of the issues that can afflict capacitor models. The result is a full, largely natural sound that treats high frequencies with respect.