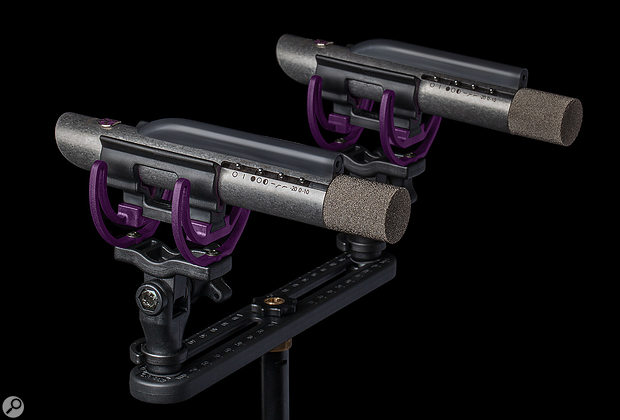 British company Aston have impressed us with their large-diaphragm mics, and now they’re tempting us with a laser-guided SDC!

Available both singly and as matched stereo pairs, the Starlight is the latest microphone from UK company Aston. Their previous two models, the Origin and Spirit, were large-diaphragm, side-address mics, so adding an end-fire, small-diaphragm mic to the range was the obvious next step.

Built around a 20mm gold-sputtered capsule feeding into transformerless electronics, the cardioid-pattern Starlight microphone is designed, built and tested in the UK, and we’re told that low noise and ultra-low distortion were made design priorities. As with their previous mics, the final selection of third-party capsule and in-house electronic circuitry was based on a number of blind listening tests involving leading engineers and producers.

There are a couple of design features that make this mic stand out from the crowd, one being the use of a sintered metal head in place of the usual mesh basket. I first saw this type of construction many years ago when I owned a pair of AKG D190s. Sintering isn’t the simplest way to make a mic head as it involves heat-bonding a huge number of tiny metal spheres, and then applying a precise thickness of plating. However, it is very strong and has proven to be acoustically transparent: since it is self-supporting it needs no internal bars that might reflect or shadow some of the sound. The capsule is built into the mic head, which can be unscrewed from the body, the electrical connection being made by means of a spring-loaded centre pin — a method employed in many classic end-fire capacitor mics.

The other and perhaps more obvious addition is the slimline laser pod running down one edge of the body, the idea being that the laser can help setting up by ensuring the mic is pointing in exactly the right direction. This is a very low-power red laser similar to those used in laser pointers, and care should be taken to avoid anyone looking directly into the beam. If you remember also to record distance measurements it can help in re-establishing a mic setup at a later date, and though we’ve lived without laser-guided microphones up until now, it can be used to confirm that the mic is on-axis to the sound source. The laser operates from phantom power and should only be activated during setting up, as it can add a little extra noise if left switched on. Standard 48V phantom power is required to run the microphone.

In terms of construction, the microphone body employs the same tumbled stainless-steel tubing construction as the earlier Aston mics, and the legend is laser etched so that it can’t wear off. A slot running alongside the laser pod houses four mini toggle switches, one of which activates the laser. In addition to pad (0dB, 10dB or 20dB) and filter (flat, 80Hz, 140Hz) switches, this particular mic boasts a three-position (Vintage, Modern or Hybrid) voicing switch, which we’re told relies on proprietary circuitry at the input stage of the mic amp rather than simple EQ applied after amplification. Vintage, denoted by a black dot, applies a little low-end lift and at the same time pulls back the extreme highs aiming to create the warm, smooth sound associated with many vintage microphones. Modern, denoted by an unfilled circle, leaves the low end au naturel but adds some high-end lift at around 8kHz to create a sense of air. Hybrid (a half-filled circle) adds a little low-end lift but leaves the highs flat.

The frequency response is stated as 20Hz to 20kHz, with the low end rolling off by different amounts depending on the voicing setting. The Equivalent Input Noise level is 15dB A-weighted (not untypical for this type of microphone), while the sensitivity is a very healthy 42.1mV/Pa. Without the pad active the mic can handle SPLs of up to 130dB, increasing to 150dB with the 20dB pad engaged.

We were sent the matched stereo pair for review, which comes with a stereo bar, two standard mic clips, two foam windshields and a pair of very elegant Rycote shockmounts specially made for Aston with purple lyres rather than the more usual red or black. This is all packed into a sturdy and eco-friendly cardboard box with a shaped polyurethane foam liner. Oh, and you also get an Aston lapel pin and sticker.

My first test was with an acoustic guitar where all three voicings produced very musical results, balancing the detail of the string harmonics with the depth of the body sound, all without sounding gritty or boomy. Some mics always seem to produce a somewhat smeary result in this role, almost as though there are phase problems somewhere, but the Starlight retains a strong sense of focus. As expected, the Vintage setting produced the most rounded sound but even that captures plenty of high-end detail. By contrast, the Modern voicing might be more suitable if you want the guitar to sit alongside electric instruments in a pop/rock song as that subtle lift to the highs can help it cut through a busy mix. You might also choose to roll off some low end if sitting the guitar in a busy mix.

On electric guitar I found that even the Vintage voicing sounded brighter than I perceived the amplifier in the room. Experimenting with the mic angle and position relative to the centre of the speaker cone softened the result, though you may still need to employ EQ. While a pencil mic probably wouldn’t be many engineers’ first choice as a close guitar cab mic, pulling it back a couple of metres from the amp captures a much more natural but still detailed sound that would blend well with a close-up dynamic mic.

Trying the mics in the role of drum kit overheads, I was pleasantly surprised that even in my small studio, the sound came back as very polished and well-balanced, other than of course the cymbals being predominant if no other mics are brought into play. The laser is useful here as you can ensure both mics are aimed towards the snare (if that is your preferred setup), then you can measure the distance to make sure both mics are also the same distance from the snare. Using the Vintage setting again I got plenty of depth from the 16-inch kick on my small studio kit, the snare sounded just as I perceived it in the room and the tom sound was just what I wanted to hear. In fact, by using a single Starlight set up in front of the kit and playing around with the position, I could get a surprisingly solid mono drum sound without using any other mics at all. I didn’t even need much EQ, though the small kick in my kit does benefit from a little 180Hz cut and 80Hz boost just to reduce boxiness and to add weight.

As a final test I tried the mic for some speech recording. The Starlight actually compared very favourably with some of my large-diaphragm mics, with the Vintage voicing producing a bigger, warmer sound than expected — but again without killing any high-end detail. While end-fire pencil mics aren’t normally associated with studio vocal recording, there’s no technical reason not to use one, and as you have a choice of three voicings, there’s a good chance that one of the options will suit the voice you are working with. You will definitely need a separate pop shield for vocal recording though.

It seems that the Starlight can turn its hand to just about anything, and even though I found it over-bright as a close mic on a guitar cab, moving it off-axis plus shaving away a little top end using EQ coaxes a very usable sound out of it if you don’t have a more suitable mic to hand. It works admirably on acoustic guitar, it doubles up as a vocal mic if you need it to and on drums it packs a weighty punch as well as retaining the transient detail. The term well-balanced springs to mind, and while I did tend to gravitate towards the Vintage voicing for most applications, all three settings have their applications. I also like the fact that the differences between the three voicings are quite subtle and natural-sounding.

Buying a stereo pair makes sense when using them as drum overheads or for instruments such as piano, and yes, I did find that laser useful, especially when lining up the mic on drums or acoustic guitar. Obviously I could live without it, but I’m very happy to have it on board — it should also impress clients!

In summary, the Starlight is a versatile and well-voiced microphone at a lower than expected price that I’m sure will see a lot of action in both professional and home studios.

There are small-diaphragm cardioid mics from all the main mic manufacturers, each of which has its own sonic character. To date though, none of the others have lasers!

A realistically priced, stylish and sonically capable microphone that can turn its hand to just about anything. The laser is a neat addition too.