Auddict Drums Of The Deep

New sound companies seem to spring up every day, each one bringing a fresh selection of sample library treats. One such outfit is Auddict, founded by Dorian Markovac (the ‘vac’ part is optional). Having made a successful recording of himself performing the knuckle-busting intricacies of Rachmaninov’s 3rd piano concerto with orchestral accompaniment, Mr Marko threw off the classical shackles, began composing his own music and with the help of five like-minded colleagues, began creating a series of orchestral sound libraries under the Auddict banner. 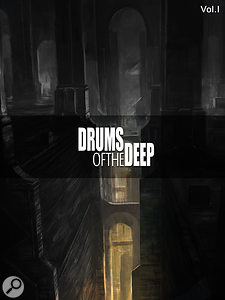 Like most current developers, this young London-based company have an eye on the trailer-music market, so it’s no surprise to find an explosive percussion collection in their catalogue. Entitled Drums Of The Deep, the 11.8GB library comprises deeply sampled large drums and metals, covering a huge dynamic range from soft, subtle dramatic hits to a stirring fortissimo racket that will quicken the pulse of media composers.

The samples were captured from seven mic positions in London’s Blackheath Halls, a late-Victorian building renowned for its sumptuous orchestral sound. According to the makers, the hall’s spacey acoustic allows the low end of instruments to speak without muddying up the bass, thereby retaining definition. That’s certainly the case with the library’s orchestral Deep Bass Drum, which combines a nice clean attack with a truly heroic boom. A Verdi bass drum also packs a hefty thump, and its more close-up and defined sound works well for fast triplets and flams.

In the same thunderous vein are a pair of large Japanese taiko drums, an African djun-djun (featuring clacky shell hits) and a large two-headed tabor drum, all sounding impressively resonant in the huge concert hall setting. The bass drums and tabor play straight hits, flams and various lengths of crescendo roll, the latter sounding agreeably ominous if a little subdued — I’d like to have heard a more ferocious climax to their volume swells. There‘s also a small selection of colourful djembe and Indian dhol drum straight hits.

Though no snare drums, toms or cymbals are included, the library offers a tam-tam gong that contributes one enormous bash along with a set of eerie effects, and a lovely ship’s bell that can be transformed into a tolling church bell with the front-panel tuning knob. We aren’t told which ship the bell was taken from, but its crew might be in trouble if they encounter a thick fog out on the water.

All instruments are presented in the classic close/mid/far miking, with a seven-mic option also available if you want to experiment. These big drums strike me as among the best I’ve heard, providing the requisite colossal bangs as well as some tremendous doomy quiet hits. Drums Of The Deep runs exclusively on Kontakt 4 and upwards, and requires the full retail version of Kontakt.