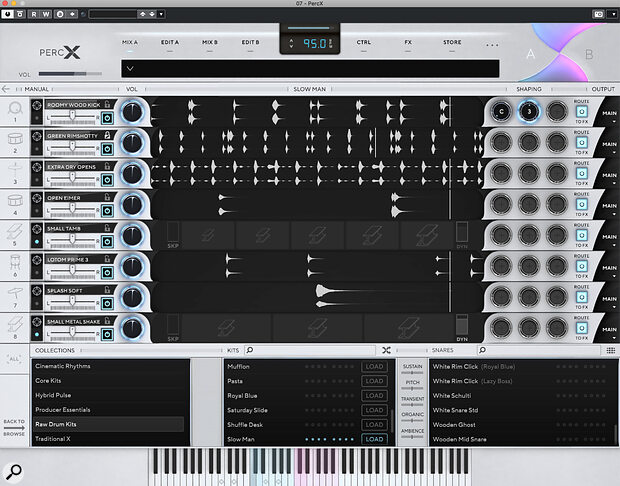 I reviewed Auddict’s impressive PercX Pro back in the May 2020 issue of SOS. This drum‑themed virtual instrument manages to combine the quality of sound usually found in a deeply multi‑sampled drum library with the performance convenience of a loop‑based drum/percussion product. Under the hood is a powerful and flexible sequencing engine, some excellent effects and automation options, and a brilliant set of highly tweakable randomisation tools within the Kit Generator feature. The ‘Core’ version includes a solid selection of drum sounds while the ‘Pro’ version adds additional options, although broadly speaking, the overall sound palette was most likely to appeal to TV/film composers rather than a more conventional songwriter/producer audience. PercX can run as a standalone application or as a plug‑in, with all the standard plug‑in formats supported.

Auddict are now back with a further library that uses the PercX engine: Raw Drum Kits. And with this release, they do seem to be aiming more at those songwriter/producer types. Raw Drum Kits can be purchased as a discrete product and this includes both the PercX engine and the Core sound library of the original release. Existing PercX owners can buy Raw Drum Kits at a 50‑percent discount and it will automatically slot in beside their existing content. Some 150 instruments — drums, cymbals and various types of percussion — have been sampled for Raw Drum Kits and, like the original release, there are plenty of velocity and round‑robin samples to ensure realistic results.

...where Raw Drum Kits really scores is the engine’s feature‑rich options for creating something rhythmically interesting entirely from scratch.

The supplied 21 preset drum kits do a good job of auditioning the new sounds. As obviously intended, these provide a much more conventional ‘drum kit’ flavour (less orchestral or cinematic) and the default patterns associated with each kit are consistent with that mood. In terms of sounds, the drums perhaps would suit pop, pop‑rock, R&B or hip‑hop styles rather than straight‑ahead rock but, even so, there is a diverse collection of powerful kicks, punchy snares and crisp hi‑hats available, allowing you to build any number of custom kits. The new sample content does sound great.

Of course, you also get the star of the show — the brilliant PercX engine — with all the pattern options, MIDI sequencing, randomisation, effects and easy performance automation. There are other software drum tools that are perhaps more focused on options for programming your own patterns (although PercX certainly lets you do that) or for metal/hard‑rock styles, but where Raw Drum Kits really scores is the engine’s feature‑rich options for creating something rhythmically interesting entirely from scratch. Raw Drum Kits is a very worthwhile expansion for the existing PercX fanbase but also broadens the appeal of the PercX engine to the pop/songwriter audience.