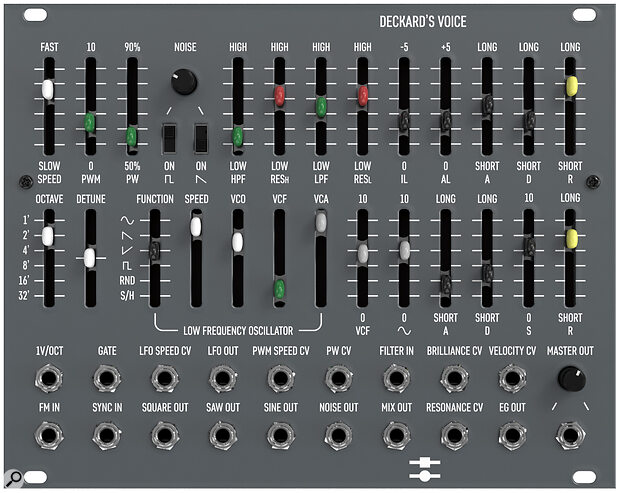 Back in March 2019, Gordon Reid reviewed the Deckard’s Dream, the world’s most complete Yamaha CS‑80 recreation. The CS‑80 remains one of the most sought‑after vintage polysynths, but with prices long ago reaching stratospheric levels, they remain completely out of the reach of normal human beings. The Deckard’s Dream, a nearly full recreation of the CS‑80 minus the keyboard, was still a hefty investment. So perhaps the best way to get a genuine taste of the CS‑80 is Deckard’s Voice.

Black Corporation have taken a single monophonic voice from Deckard’s Dream, made a few tweaks and packaged it into Eurorack format. At 32HP, it’s not a small module, but it does contain everything needed for a single monosynth voice including oscillator, high‑ and low‑pass filters, two LFOs, and two envelopes. There are 19 patch points and 28 parameters mostly on short‑throw sliders which add to the CS‑80 feel.

The VCO is capable of pulse, ‘glitch saw’, and sine wave, each of which have pre‑mix dedicated outputs. For the internal mixer, pulse and sawtooth waveforms are either on or off whereas sine and noise can be mixed to taste. This mixed output is then passed to the filter (actually the sine wave bypasses the filter) or you can route it elsewhere in your modular from the Mix Out. There are sync and FM inputs alongside the obligatory 1V/Oct pitch input. There’s a dedicated LFO for PWM, with input to control speed, or if you wish you can control PWM from another module thanks to the PW CV input. The PWM is juicy and delicious. The ‘glitch saw’ waveform is a somewhat mutated sawtooth, true to the CS‑80, and sounds like a mixture between a saw and pulse waveform. Between them, they don’t really offer a massive variety of timbres, but they are authentic and they sound suitably lush and analogue.

The filters, arguably the most important part of the CS‑80 sound, consist of a high and low pass in series. They are both 12dB/Oct designs with resonance although neither will self‑resonate. A dedicated ADR envelope is provided for the cutoff control, or you can use the Brilliance and Resonance CV inputs to control things from elsewhere. The filters sound fantastic. The resonance has a particularly agreeable quality and none of the low‑end is lost when pushing it. Resonant acid baselines and leads are a speciality. There’s also a handy audio input for processing external signals.

That leaves an ADSR envelope which is dedicated to amp envelope duties (or you can use the Velocity CV input to control amplitude from elsewhere) and the main LFO, which can modulate the VCO, VCF or VCA. Both have CV outputs so you can modulate other things. The LFO is capable of sine, sawtooth, inverse sawtooth, square, random and sample and hold waveforms (the S&circuit samples the noise output whenever a gate input is received).

I’m of the opinion that a good analogue synth can be measured by its top and bottom end. The Deckard’s Voice, in both cases, sounds superb.

Because it’s semi‑modular, Deckard’s Voice can work as a complete synth without any patching. Just supply gate and 1V/Oct in and attach the master out to your mixer or soundcard. Even like this, it offers enough flexibility to keep you in monophonic synth sounds for a long time. And it sounds great. Not owning a CS‑80 I can’t attest to its sonic accuracy but frankly who cares. The concept of a monophonic Eurorack module is so far from the CS‑80 polysynth that it really doesn’t matter too much. In the end, you’re likely to use the modular connectivity to take this to places the CS‑80 could never go.

I’m of the opinion that a good analogue synth can be measured by its top and bottom end. The Deckard’s Voice, in both cases, sounds superb. There is a delicious low‑end that has both space and body, and the top‑end exhibits none of the screechy, ear‑tiring, high frequencies that many synths do, just intricate detail that is effortless to listen to even at very high frequencies. The filter is just delicious and the oscillator, whilst not endowed with a ton of waveforms, sounds rich and refined.

Black Corporation describe Deckard’s Voice as an ‘entry‑level semi‑modular synth’. I’m not sure about that. The combination of relatively high price, a few inherited quirks and some outdated nomenclature from the CS‑80 design mean there are probably more cost‑effective and straightforward options. On the other hand, it does offer a genuinely 1970s‑sounding synth‑voice which is easy to fall in love with. Anyone with CS‑80 fetish can now have access to a pretty accurate single voice with modular extras like direct oscillator outputs, resonance control, external sync and FM. What’s not to like?