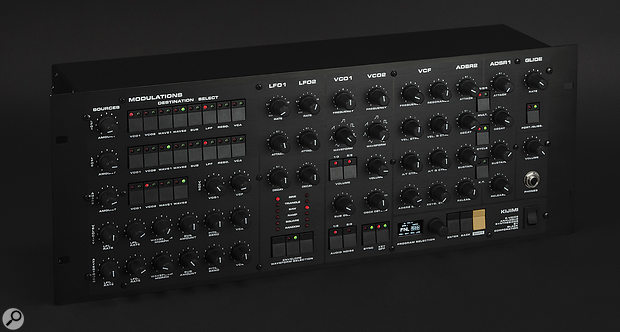 Fresh from recreating the CS80, Black Corporation set their sights on another classic polysynth...

There's a bit of a hierarchy for vintage polysynth fanatics. After the low-cost instruments such as the Polysix and Juno 60 you move on to moderately accessible stuff such as the Jupiter 6 and the Prophet 5, then upward through increasingly rare and expensive instruments such as the Synthex and the CS80 until you reach the unobtainium that is the Korg PS3300 and the Yamaha GX1. But there's another, less well-known but equally unobtainable, instrument at the top end of this scale, not least because only 30 or so were built and anybody who has a working one is more likely to bequeath it than sell it. It's the RSF Polykobol II, the inspiration behind the Black Corporation Kijimi.

Before going further, it's important to debunk statements made elsewhere that the Kijimi is a 'Replica of the RSF Polykobol II'. To their credit, the chaps at Black Corporation are not claiming this. While I was writing this review, the company's Business Manager wrote to me, "Kijimi, unlike Deckard's Dream, is not really a full-on remake and shouldn't be expected to sound like anything it was inspired by. With Kijimi, we started with a little inspirational help, but then put our own spin on everything else." Ignoring the fact that the Polykobol II is a huge keyboard whereas the Kijimi is a 4U rackmount, even a brief glance at the two synths' control panels confirms this. The Kijimi boasts a second LFO, offers different modulation options, loses the Polykobol II's arpeggiator and sequencer and, significantly, loses its bi-timbral architecture. Consequently, there's no point in writing this review with more than a passing nod to the Polykobol II. Instead, let's look at it with fresh eyes and see what it offers.

The Kijimi is an 8-voice polysynth comprising an analogue signal path controlled by digital contours and LFOs. There are two oscillators per voice, each based upon the recent AS3340 chips that recreate the CEM3340 used in vintage polysynths such as the Memorymoog and many Prophets. Since the Polykobol II's oscillators were based upon the µa726 used in the last revision of the original Minimoog it's unlikely that the underlying sounds of the Kijimi and the Polykobol II will be identical. But how would you confirm or disprove this? More to the point, does it matter? I would suggest that it doesn't.

Each oscillator offers a tuning range of ±24 semitones, while VCO2 has a fine-tuning range of ±1 semitone to allow you to create the usual detuned sounds. In addition, there's a button called Key Off that allows you to disconnect either VCO1 or VCO2 or both from the keyboard. Disconnecting one is useful — the same feature was offered as far back as the Prophet 5 — but I'm not sure what value the second and third options offer.

The facility that most sets the Kijimi apart from other polysynths is its waveform selection. The panel shows seven waves, and you can morph between these using either the front panel knob or by applying modulation. Confining the movement to the first six waves produces a rich timbral modulation that can't be obtained on synths that offer discrete waveforms. The seventh wave is a dedicated PWM option and, although you can sweep from the narrow pulse to this (and back again) you may obtain a slight audio bump as you do so, so it's best to treat this as a separate facility.

VCO1 has just four volume levels — off, 1/3, 2/3 and 1 — whereas VCO2 has a more usual volume control. Strange though this arrangement is, it allows you to mix the oscillators freely. A sub-oscillator is also provided and, even though this sits in the VCO1 section, it generates a signal one oscillator down from the outputs of both VCO1 and VCO2, which means that it generates nothing if the oscillators are silent. However, if both oscillators are used and tuned (for example) to a root and fifth, you obtain two sub-oscillator pitches, also spaced as a root and fifth. Hard sync is provided with either oscillator acting as the master. Finally, as far as the oscillators are concerned, there's a white noise generator that, like VCO1, can have amplitudes of Off, 1/3, 2/3 and 1.

The mixed outputs from each voice's oscillators now pass to its filter section. This comprises a single 24dB/oct low-pass filter based upon the SSI2144, a modern recreation of the SSM2044 filter that was used in the Polykobol II. It offers the usual frequency and resonance controls, both of which can be affected by velocity and aftertouch, plus a control for keyboard tracking which, at or very close to its 12 o'clock detent position, causes the filter frequency to track at 100 percent over a range of around three octaves.

The filter section also contains a dedicated contour generator (ADSR2) with an associated bi-polar amount control. To the right of this you'll find three switches that affect the contour. The first of these extends the Attack, Decay and Release times by factors of 2, 3 or 4, while the second promises to loop the contour, but does something quite different. When you press this, the A, D, S and R stages are replaced by something that owners of VCS3s will instantly recognise: Attack, On, Decay and Off stages. These define what is usually called a Trapezoid contour, and it can generate sawtooth, ramp, triangle and various trapezoid shapes. What's more, it can be looped with frequencies ranging from one cycle every 38 seconds to well into the audio band. This was one of the unusual facilities that made the VCS3 such a wonderful special effects generator, and it's very welcome here. What's more, when you're playing the Kijimi polyphonically, a single looping trapezoid can be applied to all voices, or each voice can have its own looping contour that's triggered whenever you play a note, which can lead to some interesting sounds and effects. The third switch is labelled 'KT' (Key Tracking) but it affects only the Attack time, reducing this slightly as you play up the keyboard whether in ADSR or Trapezoid mode. While this may be authentic with respect to the Polykobol II, it would be far more useful for all three of the Attack, Decay and Release parameters to be affected in ADSR mode so that you could imitate the responses of instruments such as guitars, pianos and percussion, and for all four stages to be modified in Trapezoid mode.

The final stage in each voice's signal path is its VCA section, which is based upon the AS3360, a modern recreation of the CEM3360. On the panel this section is called ADSR1 (which, like ADSR2, can be extended, turned into a Trapezoid, and have its Attack time shortened as you play up the keyboard) and the amplifier that the contour controls is merely implied. Two menu commands give you the only direct control that you have over the VCAs themselves: a volume setting that allows you to balance the loudness of your patches, and another that allows you to determine the maximum level produced by the synth.

There are two LFOs per voice, each offering six waveforms, the usual rate control plus what looks like an AD contour that controls its rate, its amplitude or both. However, a 'per patch' menu command allows you to change the Decay into a Release, thus making the contour an ASR that holds its maximum level until you release the key. You can use this to imitate some famous GX1 and CS80 sounds, and very nice it is too. The LFOs can be synchronised across all voices when playing polyphonically, or they can run asynchronously to create richer ensembles. However, there seems to be a bug here because the LFOs' phases lock together when you change the LFO rate, whether using the panel controls or aftertouch. This needs to be fixed.

Now we come to the aspect of the Kijimi that most resembles the RSF synthesizers that inspired it — its Modulations section. Given that its LFOs and contour generators are digitally generated it comes as no surprise to find that the low frequency modulation paths are implemented digitally, whereas the audio-rate paths are implemented in the analogue domain.

The top row determines what LFO1 controls, and by how much. The knob determines the modulation amplitude, and the eight buttons select which of the eight possible destinations are affected. You can choose any combination of destinations you wish and determine the modulation polarity (positive, negative, or centred on the unmodulated value) independently for each. The second row offers the same facilities for LFO2.

The third row contains two separate source/destination groups. The first allows you to direct ADSR2 to the pitches and waveshapes of VCO1 and VCO2 with either positive or negative polarity. The second provides cross-modulation using VCO2 as the source, and either VCO1 or the filter cutoff frequency (or both) as the destinations, with independent depths for each. This is where you'll discover how often you'll need to tune the Kijimi to obtain consistent results across all eight voices. Cross-mod reveals even the tiniest differences, so the tuning has to be accurate if you want to play the resulting sounds polyphonically.

The fourth and fifth rows determine how velocity and aftertouch affect your sounds. These can each be applied with either positive or negative polarity and independent amounts to six destinations. However, you can't affect the LFO depth using aftertouch, which is a huge oversight. Indeed, you should beware the hype surrounding the Kijimi's Modulations section. People who have probably never programmed or played one are describing its capabilities as 'huge', perhaps because its controls occupy a lot of the panel space. But, compared with hybrid polysynths boasting software modulation matrices, the number of options is tiny. What the Modulations section is, however, is immediate, and that's no bad thing.