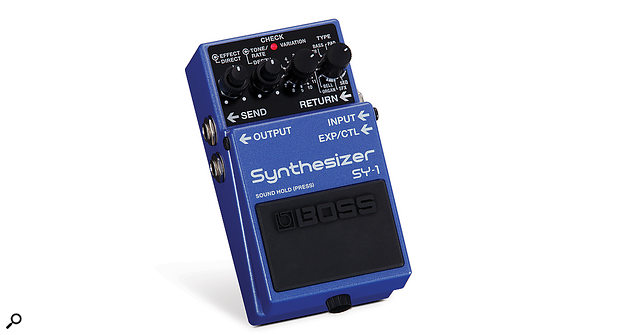 Boss have managed to pack plenty of expressive, yet guitarist-friendly, 'synth' sounds into this compact stompbox.

Guitar synths have come a long way in recent years, to the point that there are now some seriously playable sounds available in small boxes. This latest Boss offering is one of the smallest; it manages to cram 121 synth presets into a standard Boss compact pedal format. To avoid frightening guitar players with too much synth jargon, the sounds are simply selected using the permutations offered by two rotary switches, and then modified using just a couple of controls.

The technology behind the controls — which allows it to create, from a standard guitar input, polyphonic synth sounds of the type you'd expect to hear from an analogue synth — is derived from that in the larger Boss SY-300, which I reviewed back in SOS October 2015: https://sosm.ag/boss-sy-300. A small slide switch allows it to be used with either guitar or bass, and its DSP processor offers near-zero latency, so you shouldn't experience any of the off-putting delays that got the early MIDI guitar synths such a bad reputation. Battery operation is supported but, as with any DSP pedal, an external PSU would prove much more cost-effective. 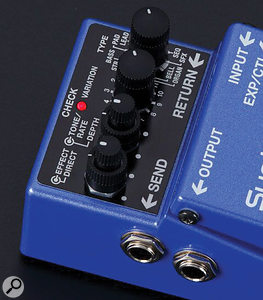 The SY‑1 features effects send/return jacks, allowing you to use a parallel effects loop or to use the send as a direct output.Using just four knobs, the left pair being dual-concentric types and the two on the right being rotary switches, operating the pedal offers near instant gratification. The sounds are arranged as 11 variations of 11 types and cover lead sounds, pads, strings, organs, bell, basses, SFX and some rhythmic, arpeggiated patterns, with some sound types covering two banks. But although the sounds are based on presets, you can still make limited adjustments using the Tone/Rate and Depth knobs, and also adjust the dry and effected levels separately. The functions of Tone/Rate and Depth vary depending on the preset you've selected, but they usually govern things like filter cutoff and brightness, overall tonality, or modulation rate.

The input and output are via standard mono jacks and two further jacks provide an effects loop, via which it's possible to mix a chain of one or more pedals in parallel with the SY‑1's synth voices. Alternatively, the send can be used as a direct output, meaning you can route synth and guitar sounds to separate amps or mixer inputs.

Usefully, the SY‑1 also incorporates options for adding expression during performance. Pressing and holding the pedal switch sustains the last played synth sound indefinitely, and there's also a TRS control jack input that can host an external single or dual footswitch — either can operate the Hold feature, while a dual unit's second switch can control the tap rate or octave-shift, depending on which preset is selected. Alternatively, you can hook up an expression pedal for hands-free Tone/Rate control. 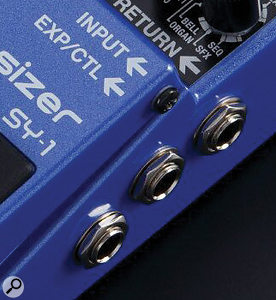 External footswitches and expression pedals are supported.In terms of the sounds available, Boss have played things fairly safe and I think that's deliberate; they've tried to come up with a range of sounds that guitarists will find comfortable, rather than giving them too much by way of slow attacks or odd textural burblings. That's no bad thing in my book, given the intended audience, because if this one fails to satisfy your inner tweaker, Boss do also offer more fully featured guitar synths.

As with the SY‑300, there are no pitch-tracking issues, and it seems as though much of the sound is derived by processing the signal from the strings themselves rather than tracking the pitch to drive an oscillator. On some patches that include octaves, playing chords reveals an underlying 'grumble', but when layered with guitar that's not usually noticeable. I also found that on some patches the output level dropped a little once you got onto the top two strings of the guitar.

The Hold function works beautifully, though; whatever you are playing is transformed into a smooth, sustaining backdrop until you release the pedal. The claim of no noticeable latency is also upheld, with everything feeling instant. Those patches with resonant filters are also nicely velocity sensitive and respond very well to picking intensity.

On a practical note, the SY‑1 should go either at the start of a chain of pedals or possibly after a compressor. It's fine after a buffer too, but if you put it after delay, reverb, modulation or distortion it just isn't going to work properly — it needs a clean signal to allow it to do its thing. Of course, the result isn't a typical guitar sound, and to my ears it tends to sound better played through a full-range speaker than through a typical guitar amp. Using the loop output to split the signal, so that the synth sound can go directly to the PA or to a small keyboard/acoustic guitar amp, will give the best-sounding result.

Let's consider some of the sound categories in a little more detail. The rhythmic banks are filled with arpeggiated and rhythmic sequences — rather reminiscent of the Stranger Things theme music, or some of the early Who material (eg. 'Won't Get Fooled Again' and 'Baba O'Reilly'). They can be varied in speed from quite leisurely to impossibly manic. If you have a use for them, you'll find that they sound most impressive. There are several special effects in the next section that sound somewhat like the rumbles from an eight-bit video game or space lasers, but after that we move onto more musical fare. The bell sounds don't have quite the detailed nuance of a dedicated FM synth but they do lean slightly in that direction, producing analogue interpretations of electric pianos and similar 'tinkly at the front' sounds. You won't fool anyone that you're playing a Fender Rhodes but, importantly, the sounds are musically valid.

I thought the organ emulations better than the ones from the SY-300, though I don't think they're as convincing as the ones from the Electro-Harmonix B9 and C9. When layered behind a guitar, though, you'll still have the audience believing you have a keyboard player hidden behind the curtain. Some have a built-in vibrato that I'd have preferred to be able to switch off — that way I could have used my own rotary speaker pedal to create a more realistic effect. There is one excellent patch which gets close to a Vox Continental sound with the vibrato switched on, which will be handy for all those times you get bullied into playing 'House Of The Rising Sun'!

The bass section is unashamedly analogue: fat, deep and often squelchy, and perfect for monophonic lines, but you can still play chords.

Don't expect the string section to sound like an orchestral sample library, as that too has been designed to sound like its analogue counterpart, with a good variety of generic string machine sounds plus some useful pseudo-cellos. I found that adding your own modulation or shimmer reverb to these in the studio improves them significantly for recording purposes, but for live they'll get the job done in a pleasingly retro way. The bass section is unashamedly analogue: fat, deep and often squelchy, and perfect for monophonic lines, but you can still play chords using these sounds if you like. Using the Tone/Rate and Depth controls, the sounds can be finessed over quite a wide range, from thick and warm to quite edgy and aggressive.

This generally old-school feel carries over to the Pad section, and whereas the SY‑300 can conjure up some fairly ethereal sounds by combining its synth sounds with its onboard effects, the SY‑1 is more about bread-and-butter saw and square pads, sometimes with added octaves and filters sweeps. Like the Seq section, the lead section occupies two banks, and it covers all the analogue favourites that hark back to the days when Prog ruled the Earth. Here you can serve up a searing Jan Hammer-style lead, analogue brass, or perhaps a bit of ELP, especially if you pick a patch with added fifths for that 'Fanfare' sound. Because the sounds are derived from the guitar strings, note bends and vibrato are followed perfectly and, as a long–time guitar-synth dabbler, I found the playing experience to be very immediate, much like using the old GR‑300, which also processed the string sounds, albeit needing a special guitar with a hex pickup. Again, the limited-but-useful controls can be used to make the sounds more polite or more aggressive. 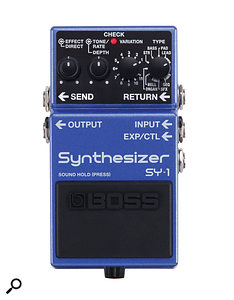 There are just a couple of other issues to note. Some sounds lose a little by way of level as you move up towards the higher notes. And it's a bit fiddly having to bend down to change patches. But again, you can't have everything from such a compact pedal, and Boss offer more full-featured devices if that's what you want.

As with the SY-300, some of the sounds stand up to detailed scrutiny better than others, with the more straight-ahead analogue synth sounds coming off best, but once layered with guitar or played in the context of a live band most are very believable — and even where they don't quite manage that they are at the very least as musically valid.

Also impressive, given the compact format of this pedal, is the wide choice of sounds. And although there are very few controls, they are quite wide-ranging and allow you to modify them to a useful extent. The Seq section in particular is great fun, and this could easily provide the inspiration for a new composition or two. And if you use the Hold feature while playing, the arpeggio continues to cycle while you play guitar over the top of it, which expands the possibilities still further. That Hold feature is also great for holding pad sounds while you play over them — it's the sort of thing that would be perfect for Floyd covers if your line-up lacked keyboards.

In summary, then, given the affordability and compact nature of this pedal, I'm struggling to think of any reason why you shouldn't add one to your pedalboard.

The closest alternative is the EHX Synth 9 pedal, which has nine synth sounds that can be modified to a limited degree. Also check out Boss's slightly larger pedal, the SY‑300.

While not all the patches sound perfect in isolation, all sit well behind a guitar part, and given the compactness and convenience of the SY‑1 it provides a very practical means to add synth sounds to any pedalboard setup.