Is EHX’s latest pedal perfect for guitarists who want to pull out all the stops?

I found the demo videos of Electro-Harmonix’s new B9 pedal so compelling that I put one straight on the credit card, rather than wait several weeks for a review model to arrive — and having now put it through its paces, I’m glad I did, as I will certainly be able to make good use of it on stage and in the studio.

The concept is simple enough. You plug in a conventional electric guitar and the pedal generates a choice of nine different organ sounds. There’s no hex pickup, no laptop full of samples and no MIDI — just a stompbox, which I have to say is very reasonably priced. Depending on the preset chosen, you’re able to adjust either the amount of key click or the depth of modulation, and there are separate outputs for the dry guitar and organ sound, should you wish to feed separate amps. 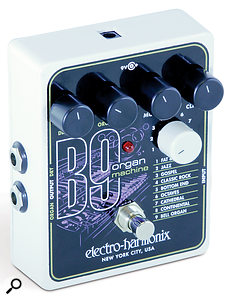 If this seems longer than a typical pedal review, that’s because the B9 isn’t a typical pedal. I think it steers what we might think of as ‘guitar synthesis’ in the most promising direction yet — and I really think Roland should be pushing harder in this direction, with their clever HRM processing technology. Although their VG devices already offer organ–like tones, they don’t approach the realism on show here.

Let’s look at the technology first. This isn’t a pitch-tracking, sample–firing guitar synth, with all the attendant headaches of such devices. And, as I say, it doesn’t need a hex pickup. In fact, it’s based on the same type of pitch-shifting and wave-shaping technology used in Electro-Harmonix’s HOG pedal, but finessed to the point that it’s able to produce extremely credible organ tones.

I suspect some form of polyphonic pitch–tracking is used to control the filters that shape the sound, but the sound itself comes from processing the sound produced by the guitar string. The range doesn’t extend beyond the 23rd fret of the top E-string, but there are none of the familiar ‘guitar synth’ tracking issues to worry about, such as delay or wrong pitches being produced. That said, the filters can be coaxed into the occasional tonal warble with some chords, particularly major sevenths, with two notes in the chord being just a semitone apart. If the organ is layered with the guitar this is usually quite unnoticeable, but it’s something to be aware of when playing more exposed parts.

The playing experience reminds me of working with the aforementioned HRM pseudo–synth sounds generated in Roland’s current range of VG processors, or even playing Roland’s ancient GR300 guitar synth, which also worked by processing the string signal. Even so, clean and even playing is always rewarded. Choosing suitable organ chord voicings, playing partial chords or arpeggios sounds far better than just strumming, though it will follow strumming too if you really must. Similarly, although the organ sounds will happily follow your pitch bending — or even slide playing, if you wish — that’s really not the way we expect to hear an organ sound. Organs aren’t normally velocity sensitive, so players with wayward picking dynamics might produce a more even and organ–like result by putting a compressor before the B9.

For the best–sounding results, the B9 needs to be placed either at the start of your pedal chain or directly after a compressor. It doesn’t take too kindly to being fed ‘dirty’ signals, or ones with echo or reverb added — but you can always add these effects afterwards. The manual also suggests that the bridge pickup of a typical guitar gives the best result, but in practice I found that any pickup combination on my Strat sounded fine. You will, however, notice some changes in timbre if you change pickups — remember that the sound is produced by processing the input signal, not by replacing it with something else, so if you plan to use this a lot, some experimentation with pickup choices may be worthwhile.

The pedal takes the form of a fairly unassuming die–cast box, but inside it’s full of surface-mount cleverness. The organ output sends a mix of guitar and organ sound, depending on the Organ and Dry level settings, so when working with a single amp you can balance the contribution of each. When you hit the bypass switch the guitar signal is output from the organ jack at full volume. Note that the output is buffered (there’s no hard bypass). A power supply is included, but the pedal can also be powered from a Boss–compatible external power source. There’s no battery-power option, probably because the 100mA current draw would get through batteries pretty quickly!

Four knobs along the top relate to the Dry and Organ levels, modulation rate and key–click level, with the last also adjusting the modulation depth on those sounds that don’t require a key click. Clicks are only generated on the first note of a chord or phrase and don’t recur until the input signal has fallen below some internally determined threshold. A further knob operates a nine–position voice–selection switch, with descriptions of the nine sounds printed on the front panel.

The user has separate control over guitar and organ output levels, as well as the degree of modulation and key click.The nine voicing options are Fat and Full, Jazz, Gospel, Classic Rock, Bottom End, Octaves, Cathedral, Continental and Bell Organ. The first eight emulate popular organ sounds and cover tone–wheel, electronic and cathedral organ tonalities. The last setting merges the bell–like attack from an electric piano with an organ pad sound, with the bell component being somewhat touch–sensitive.

The modulation is essentially, in most cases, a chorus–like effect, but it makes a surprisingly good stab at lending a rotary character to the sound. The Continental voice has vibrato modulation and the Cathedral has tremolo. I think the designers have missed a trick, here, as rotary effects always sound best when you’re able to switch speeds during performance, ideally with the speed change lag built in. This could have been achieved via either a second footswitch or an expression pedal input, and I’d have happily paid a little extra for this facility. As it is, I’m tempted to buy a separate rotary emulation pedal to put after the B9 — but to be fair, a decent one of those costs more than the B9 itself.

Having played with the pedal a great deal now, I’ve come to the conclusion that it sounds best when fed into a separate and fairly clean amp, especially if you need a dirty guitar tone. So, for my own live use, I plan to route the organ component to the PA mixer via a volume pedal or, for smaller gigs, to a separate guitar combo. You can always put other effects pedals, such as overdrive or delay, after the organ output if you need them. In the studio, of course, you can add whatever processing you like, including things like rotary speaker and amp modelling, via plug–ins after recording.

How realistic the organ tones sound depends very much on how you play them, although when layered behind the guitar sound with no change to playing style they always manage to convey the sense of a keyboard player in the background, as the organ notes sustain much longer and at a more even level than typical guitar notes. For example, if you choose the Gospel setting and ‘arpeggio’ your way through Dylan’s ‘Like A Rolling Stone’ with an equal mix of guitar and organ, the result is uncannily realistic. The same goes for ‘House Of The Rising Sun’ using the Continental voice. Note, though, that you may get fined for doing that in a music shop...

More exposed parts or solos require a bit more musical thought, but I’ve found that it is still possible to get very close to recreating the effect of a real organ performance in a band or duo context. The pedal also works with the higher notes of an electric bass guitar, though not quite so well below the instrument’s D-string.

The stars of the show for me are the Gospel organ, the Cathedral organ (very psychedelic) and the Continental, but each voicing has applications, and all of them sound uncannily like the instrument they emulate. Bottom End is also useful for adding a sub-octave with a bit more character than a typical octave divider or pitch-shifter would give you.

Of course, the physical playing experience is also vitally important. The B9 makes you feel as though you’re playing through an effect — and I mean that in a positive way; you don’t get that detached feeling that comes from working with a pitch–tracking guitar-synth type of device. The sounds are also touch-sensitive and change in character slightly depending on picking intensity; if you strike a pinched harmonic, the organ sound follows it rather than going off into wailing histrionics. This makes the playing feel immediate and natural.

To wrap up, then, if having the ability to recreate organ sounds either live or in the studio appeals to you and you don’t want to fight with the quirks of conventional guitar synths or computers and MIDI, the B9’s cost of admission really will be money well spent.

Roland’s various HRM modelling devices come the closest, but they require a hex pickup to be fitted to your guitar. Other than that, the only competition comes from other Electro-Harmonix devices, such as the POG and HOG, which are more expensive but offer a wider tonal palette than organs alone.

A surprisingly believable and versatile organ emulation, considering that it’s processing the guitar sound directly. Very usable on stage or in the studio.