Could this thoughtfully designed bass front-end be the answer to every bassist’s stage and studio prayers?

The ValveDrive DI is intended for bass guitar and is part valve DI box , part overdrive pedal. It has both a balanced, high- impedance XLR output (suitable for mic inputs, at 20dBV) and an unbalanced, low- impedance, line -level ( 10dBV) jack output. Its sole input, a 1MΩ quarter -inch jack, has an associated 10dB pad switch, which means it should work fine with active or passive pickups. On the top panel is a large, polished -chrome chassis that houses an ECC83 (12AX7) valve. EBS have thoughtfully contrived to power the pedal using a standard (and included) 9V DC power supply, while stepping this up internally so that the valve and its attendant circuitry have a high-voltage supply. Below the chassis are the pedal’s self -explanatory knobs (volume, treble, middle, bass and gain), and finally the bypass and Vintage footswitches. 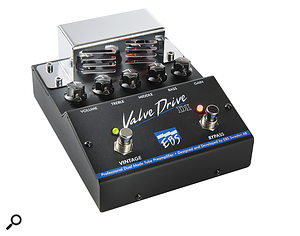 The EQ controls work more or less as you’d expect, other than that there’s quite a ‘scooped’ sound by default. To achieve a ‘flat’ response you have to turn the Bass and Treble controls down but leave the Middle knob at around 12 o’clock. There’s enough range on all the bands, though, to get pretty much any kind of tonal balance you’re likely to need, especially once you take into account the Vintage switch. This switch’s exact workings aren’t made too clear by the manual (which describes it rather vaguely, as “changing the tonality” and adding some compression), but to my ears it seems to boost the mids a lot, which is useful if you’re not after a modern, ‘zingy’ sound. The effect of the Vintage switch varies quite dramatically depending on how much drive you’ve dialled in. At lower gain settings, it seems to fill the sound out a bit, negating some of that scooping, but when applying a fair bit of distortion it adds quite a lot of extra bite.

There’s overdrive available in buckets — this thing really can pile on as much of the stuff as you’d reasonably need — but it’s also capable of subtle saturation and everything in between. With the gain turned just a notch above zero, and the volume turned up to compensate, you can coax some very authentic soul and reggae tones out of this DI, especially with Vintage mode engaged and the treble backed off. At the other extreme, you can achieve some delightfully nasty tones, along the lines of Aphex Twin’s brutally abrasive ‘Come To Daddy’.

So, this device is capable of some very useful sounds across a remarkably broad tonal range, then. But I did have one gripe. The manual makes reference to the bypass switch being able to operate either as a ‘normal’ bypass or as a mute, depending on the position of a switch on the back panel. Yet, this switch doesn’t exist! (When I contacted EBS, they told me that the manual was out of date and that they found that there just wasn’t room on the back to accommodate what was an early design feature). As it stands, the bypass switch works as a mute on the XLR output and as a bypass on the jack, which, for me, rather limits the pedal’s usefulness. For example, if you wanted to use it as an occasional effect live, you’d need a separate DI box to connect to the pedal’s jack output; if you tried to connect the XLR out straight to the FOH desk, you’d end up muting yourself whenever you bypassed the pedal.

That criticism aside, the ValveDrive DI is a great -sounding and very versatile pedal. Whether you want to use it as a spot distortion effect through a bass amp, or a valve ‘warmer’ on your way to front -of -house or a recorder. Chris Korff