EasyBeats LE is the free version of EasyBeats and is compatible with all iOS devices running iOS 6.1 or later. I tested it on an iPad 3 and it worked flawlessly. Being free it has certain limitations, but still does everything you need to get a taste for what the full version can do. Essentially EasyBeats LE combines a set of 808-inspired electronic drum sounds with the ability to record a sequence of up to four measures (16 steps per measure), either directly by tapping an MPC-style pad page or via a familiar drum grid. This free version only includes one kit of sounds and you can’t chain patterns together to create a complex arrangement as you can in the full version, but it is still pretty flexible. It shouldn’t take you long to decide that you need the full version, and why not as it costs peanuts? 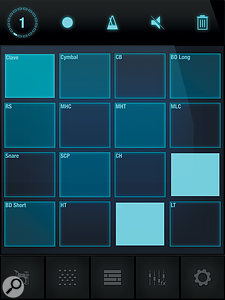 EasyBeats familiar MPC-style pad screen. The grid and pad entry systems can be used as necessary to shape your pattern. Both have the ability to add or remove notes, giving you the ability to combine real-time and grid programming. There’s a variable level metronome that automatically quantises your hits on the pads. The tempo and amount of swing of the pattern can be varied, as can the pitch and velocity of individual steps.

There’s also a neat effects section where any combination of high-pass filter, reverb and distortion can be applied and controlled by running your finger across a virtual XY pad to control the effect amounts in real time. These effects actually sound really good and can turn a sterile loop into something with real character. Your XY movements may be recorded so that they play back along with the pattern, so dynamically changing sounds are easy to achieve.

If you want to be able to export your finished beats you’ll need to splash out £2.99 $4.99 for the full version, which also allows you to create arrangements from up to 16 patterns with quantisation of up to 64 steps per measure. If you need additional kits to use with either version you can purchase them from within the app (though the paid version includes some extra kits anyway) while the paid version also allows you to import your own sound samples, to set other time signatures and to save your work as exportable WAV files.

EasyBeats certainly lives up to its name in making it simple to create some very usable rhythmic loops, the sounds of which are easily good enough to use in a serious composition. The bottom line is that if you like tinkering with old-school drum machines, you’ll love this. If you’re too mean to buy the full version you could record your endeavours via the headphone jack, but given that the full version of the app costs less than a beer, there’s really no reason not to buy it.