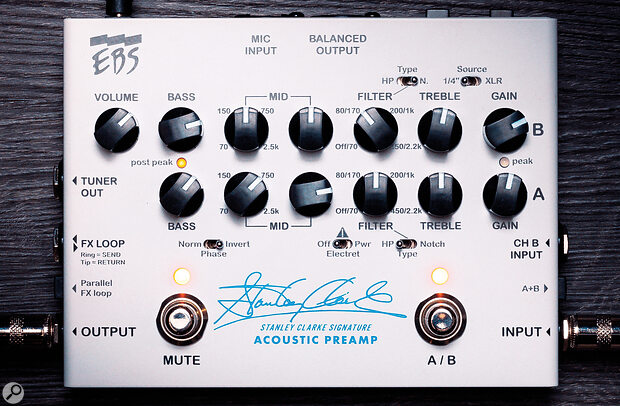 Is this the perfect partner for acoustic bass?

Although best known for their electric bass amps and effects pedals, Swedish manufacturers EBS also offer several products for acoustic bassists and guitarists. A case in point is their latest release, the Stanley Clarke Signature Acoustic Preamp, which I’ll refer to as SCS in this review. Introduced in late 2020, this was developed in collaboration with the legendary jazz electric and double bassist, whose name and signature it carries.

Clarke’s double bass pickup of choice is a twin‑element Underwood piezo bass pickup, a design that dates back to the 1970s and which needs to see a high input impedance. Over the years, Clarke has been an enthusiastic evangelist for EBS’s MicroBass II preamp/DI box, the first in the MicroBass series to feature a piezo‑friendly 10MΩ impedance input. When the Microbass II was updated to the larger and more comprehensively equipped Microbass III, EBS took the opportunity not only to create Clarke’s signature preamplifier, which accommodates the use of a microphone alongside a piezo pickup, but also to add facilities that expand its applications to include other lower‑register acoustic instruments equipped with mics and/or piezo or magnetic pickups.

The SCS’s steel enclosure retains the company’s tank‑like build quality, but the aesthetics are a departure from EBS’s signature cosmetics: the legends and knobs are both black, their contrast with the white casing enhancing visibility, even in low‑light situations. The rotary controls on both the A and B channels are laid out from right to left, input to output and are functionally identical. The Gain controls provide up to 30dB of gain, share a dual‑colour peak LED (red for A and yellow for B) and are followed by shelving Treble filters (±15dB at 10kHz). Switchable, dual‑function High‑Pass/Notch Filters come next, their cutoff frequencies ranging from 20 to 450 Hz at ‑12dB/octave in high‑pass mode. In notch mode, the filters can sweep a fixed ‑7dB notch (with a Q of 7, or 0.2 of an octave) from 70Hz to 2.2kHz. Next in line are the two‑knob, broad‑sweep Midrange filters, with a range of 70Hz to 2.5kHz, a Q of 0.8 (1.7 octaves) and gain of ±13dB. Bass shelving filters (±15dB at 40Hz) and a common overall Volume control complete the channel control line‑ups.

The front panel is also home to a pair of footswitches (Mute and A/B switching) and five mini‑toggle switches that set various channel parameters. Two are the Channel A and B high‑pass/notch filter switches that we’ve already discussed. Channel A carries two additional switches, one of which inverts its polarity (‘phase’), while the other routes 5V DC at 2mA to its input jack, for powering compatible electret microphones. Channel B has only one additional switch, which toggles its input between the side‑panel quarter‑inch jack and the rear‑panel balanced XLR.

On the right‑hand side panel are two quarter‑inch jack sockets, each with a 10MΩ input impedance. One is labelled Input and the other Channel B, with an A+B button sitting between them, and along with the front‑panel A/B footswitch these deliver a very flexible set of input configurations. With the A+B switch in its ‘out’ position and a jack inserted only in the Input socket, the footswitch toggles between the A and B channels. However, if a second jack is then inserted into the Channel B input, or that input is switched to the rear‑panel balanced XLR, the Input jack routes only to Channel A and the footswitch again toggles between the two channels.

With the button in its ‘in’ position, the switching changes. With only the Input jack used, the footswitch toggles between Channel A and A+B, which places Channel B in series with Channel A. However, if a second jack is inserted into the Channel B input (or the balanced XLR input is selected) the two channels run separately in parallel and are mixed together before the Volume control, leaving the footswitch with no functionality.

The XLR mic input supplies 48V phantom power for conventional studio mics and DI boxes, while the Channel A input on the side can supply 5V 2A for compatible electret mics.

The SCS’s rear panel is home to the following:

On the left‑hand side panel you’ll find the remaining outputs. There’s a Tuner Out quarter‑inch jack, whose output is tapped from the send side of the effects Loop that sits next to it, on a quarter‑inch TRS jack socket. The effects loop can be switched between series and parallel operation using the button that nestles between it and the unbalanced output jack. The latter runs at a nominal 0dBv (+2.2dBu).

I very quickly came to realise just how powerful and flexible a preamp this is, and how much of that flexibility is useful in a live gigging environment. Its midrange tone control and filter/notch frequencies operate in the high‑bass/low‑mid space — if you’re an acoustic bassist, play an acoustic baritone guitar or even just a regular acoustic guitar, you’re going to appreciate this detailed focus on the area between 70Hz and 2.2kHz. However, the shelving responses mean that the bass and treble controls have an appreciable effect both above and below their specified corner frequencies and this, particularly when combined with the broad Q of the mid sweep and the high‑pass filter’s steep roll‑off, means you have a pretty wide tonal palette to play with.

I had little difficulty dialling in my household’s double bass, acoustic bass guitar, cello, octave fiddle, cello banjo, baritone guitar and various acoustic guitars; between them, these carry a wide (or even weird) mix of different types and brands of piezo and magnetic pickups and either onboard or external mics. Although not its raison d’être, the SCS performs perfectly with an electric bass too, making it the ideal companion when doubling acoustic and electric basses on your gigs.

I very quickly came to realise just how powerful and flexible a preamp this is.

The SCS’s channel switching might strike you as a little idiosyncratic but it makes a lot of sense when viewed in the context of a live performance. With one instrument plugged into the A input, you have the choice of setting up two different level/EQ combinations and then switching between them to cover, for example, two different instruments or switching from flatpick to fingerstyle or from arco to pizzicato. Alternatively, you could cascade A into B to cope with, say, boosting your volume level and avoiding feedback when doing so. Using two inputs gives you the possibilities of either switching quickly between two instruments, or of switching between, or of mixing, two pickup types or one pickup and a microphone.

As mentioned earlier, the XLR microphone input supplies 48V phantom power, and this allows the connection of a phantom‑powered DI box, preamp or effects pedal instead of a mic, should you desire. I’m a big fan of parallel effects loops, so the SCS’s effects loop series/parallel switching is a very welcome facility, as is its independent tuner output. The switchable loudspeaker simulator sounds relatively subtle to my ears, but it does definitely deliver a sound with the character of a 4x12 cab.

I like the Stanley Clarke Signature Acoustic Preamp a lot. Its precise, accurate, dynamic and detailed audio performance, underpinned by its 20Hz‑20kHz (±3dB) bandwidth, impressed me the most. But add in its operational facilities and it becomes a versatile acoustic instrument preamplifier that’s stage‑optimised, yet also very studio‑friendly. It offers superb value for money to acoustic instrumentalists in general, but to double bassists and acoustic and electric bass guitarists in particular.

The Stanley Clarke Signature is a good‑sounding, attractively priced and feature‑packed acoustic preamp that’s both stage and studio friendly.