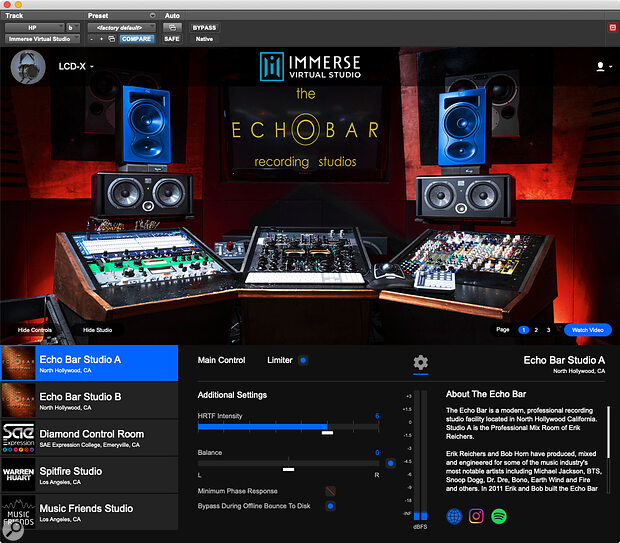 Embody offer a unique way to tailor their room‑simulation system to the individual user.

The idea of Embody’s Immerse Virtual Studio is to give headphone listeners the experience of sitting in a virtual control room while mixing. This isn’t a new concept: Focusrite’s VRM Box pioneered the technique many years ago, and there are other plug‑ins that offer superficially similar features. Each of these has its own unique selling point: Waves’ Abbey Road Studio 3 supports their NX head‑tracking system, dSONIQ’s Realphones combines room simulation and headphone correction, while Slate’s VSX is a complete system comprising plug‑in and matching headphones. Immerse Virtual Studio introduces further twists to the genre.

All of these plug‑ins aim to create an immersive effect by replicating the way in which sound arriving at our eardrums is filtered by the outer ear, skull and torso. This can be achieved either at source, by recording the impulse response of the control room with a ‘dummy head’, or by processing a conventional stereo impulse response with a head‑related transfer function (HRTF). However, neither of these approaches takes into account the fact that everyone’s hearing is different. The more your own ears and head differ from those of the ‘dummy head’, or the head that was used to derive the HRTF measurement, the less likely you are to find the psychoacoustic illusion of sitting in a virtual control room believable.

The obvious solution to this problem is to create personalised HRTFs but, until recently, this required expensive specialised test equipment and expertise. Embody’s key innovation is that they’ve developed an alternative approach, which can derive an HRTF visually from a single photo of your right ear. It’s a computationally intensive AI‑based process which takes place in the cloud rather than on the local computer.

The first time you run Immerse Virtual Studio, you’ll be walked through the process of taking a suitable photo and uploading it to Embody’s server, where an ‘image’ is derived and beamed back to the plug‑in. The whole process is very slick, but be aware that it has to be done using a smartphone — my smart‑arse plan of taking a better photo on a ‘proper’ camera backfired as there was no way to upload the result. A single Immerse licence allows you to have up to five of these HRTF ‘images’ for different users. 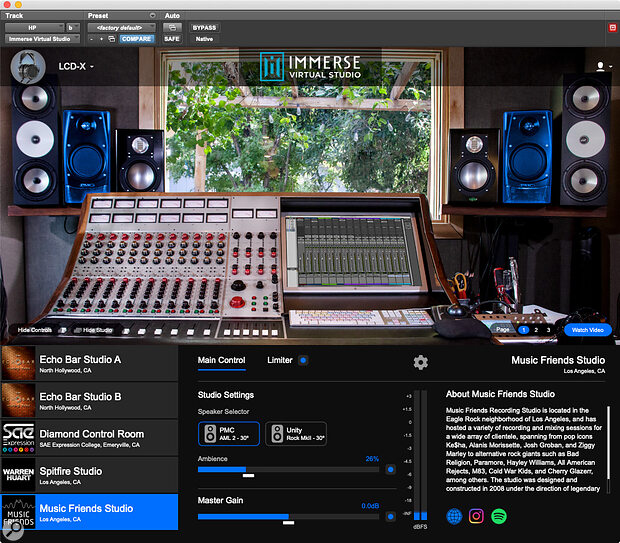 The currently selected speaker in the chosen virtual control room is highlighted blue.

The Immerse technology is actually realised in a number of different products. In the ones intended for the pro audio market, the basic idea seems to be that you can either buy a full‑blown Immerse Virtual Studio licence, or opt for a somewhat more affordable ‘partner’ edition which is limited to working with a particular DAW or with a particular manufacturer’s headphones. For example, Audeze Reveal+ is essentially the same product, but it will work only with Audeze headphones. The full version supports all of Audeze’s headphones (I tested it with their LCD‑MX4s), along with select models from AKG, Audio‑Technica, Beyer and Sennheiser.

However, Immerse doesn’t perform headphone correction as such. The EQ curve that’s applied when you select a pair of headphones is not something created on a test rig to compensate for measured deviation in frequency response. Instead, it’s the result of manual ‘tuning’. Once they had made binaural impulse responses in each control room, Embody got the engineers who work in those rooms to audition the results on each set of headphones and come up with an EQ curve that created the best subjective match. So, for example, when you choose the virtual Spitfire Studio and select Audeze LCD‑1, you’ll hear celebrity engineer Warren Huart’s own best effort at matching the sound of his control room on those phones.

At the time of writing, five control rooms are available, each with a choice of two sets of loudspeakers. None of the rooms has quite the cachet of Abbey Road Studio 3, but they’ve all been used to mix hits. Some of the speaker choices are a bit random, though, and I would rather have studio staples like the NS10s and Auratones than the budget active nearfield models included here.

Once you’ve chosen your headphones and your virtual mix suite, further control is relatively minimal. One slider adjusts the amount of room ambience, and a second the overall gain. A cogwheel icon opens some Additional Settings, including a left/right Balance slider and a control labelled HRTF Intensity, which adjusts the degree of binaural spatialisation that is applied. This page also houses the invaluable option to Bypass During Offline Bounce To Disk, which goes some way towards compensating for the fact that there isn’t a standalone or ‘system‑wide’ version of Immerse. There’s also an output limiter, which is useful when auditioning mastered material, but currently offers no visual indication of when limiting is taking place.

Compared with the generic HRTF in Realphones, the most noticeable difference was that Immerse seemed to preserve a lot more detail in the upper midrange and high frequencies.

Immerse Virtual Studio is an ‘all or nothing’ product. Unlike, say, Realphones, it’s not designed to allow you to bypass the different elements of the processing, or adjust them independently. Rather, the idea is to give you a ‘curated’ listening experience, tailored by the owner of a studio and certified as matching their own perception of how that studio sounds.

This makes it hard to evaluate Embody’s claim to be able to derive a good‑quality HRTF from a single photo of your ear, since you only ever hear this after it’s been ‘tuned’ to a particular control room, and there’s no option to switch to a generic HRTF. My impression is that it works pretty well, though. I certainly wouldn’t go so far as to say that I forgot I was wearing headphones, but there were no issues with left/right balance, and imaging was generally good. Individual sources definitely felt as though they were in front of me rather than inside my head, which is one of the key issues with headphone mixing. Compared with Realphones, which offers generic HRTF and measurement‑based headphone correction rather than ‘tuning’, Immerse seems typically rather brighter, perhaps preserving more high‑frequency detail.

The ability to switch instantly between speaker sets is something I find very important when mixing, but I was slightly put out by how much the five virtual control rooms differ. Perhaps reflecting the fact that each room was ‘tuned’ by a different engineer, material that comes across as rather dull‑sounding in the SAE Expression room can sound almost tinny in Music Friends Studio, for example. After spending quite a bit of time chasing my tail trying to get mixes to sound good in all the control rooms, I eventually decided it was better to pick one and stick with it.

The most important thing, though, is that a virtual control room should help convey how a loudspeaker system might present the frequency balance, dynamics and stereo imaging of your mix, and I think Immerse does this. I wouldn’t want to mix with it permanently on, but if you want to know whether you’ve overcooked the low end, or if your vocal is sitting at the right level, or if your reverb ought to be more prominent, this is a valuable tool for sure. No plug‑in offers a full substitute for loudspeakers in a good room, and some will look at the Lifetime Plan and think “I could buy a great pair of headphones for that!” But the monthly plan offers a ‘pay only when you need to use it’ alternative, and if you’re struggling to mix on the great headphones you already have, Immerse has the potential to be very useful.

Unlike other ‘virtual studio’ plug‑ins, Immerse Virtual Studio is tailored to your own ear shape, with headphone frequency compensation set up by the engineers who know the real studios!