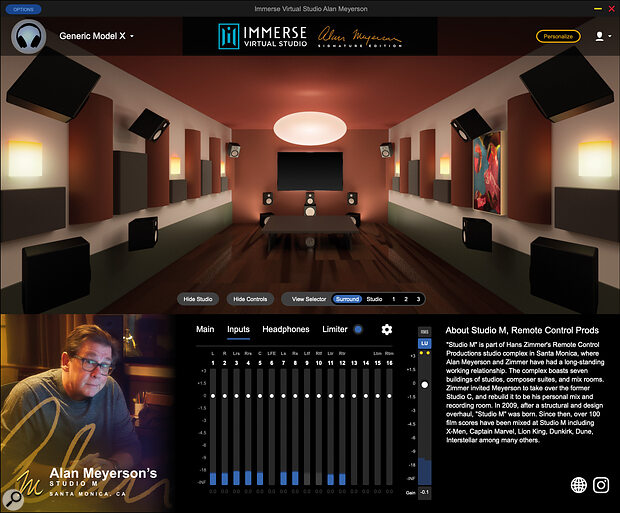 Embody’s Immerse Virtual Studio aims to replicate loudspeaker listening on headphones — and the newest variant does so in up to 7.1.6 surround.

Most engineers still prefer to mix on speakers rather than headphones, but it isn’t always practical. There are now many products that aim to bridge the gap, using binaural processing to present your music in a virtual control room. Immerse Virtual Studio (IVS) from Embody is one such, and it has a couple of interesting features that help it stand out from the crowd. Rather than employing a generic head‑related transfer function (HRTF) to implement their binaural processing, Embody have developed an AI‑powered system which can generate a custom HRTF from a photo of your ear. And whereas other manufacturers include measurement‑based correction for headphone frequency response, the room/headphone combinations in IVS are ‘tuned’ by ear, by the engineers who work in those studios.

The original Immerse Virtual Studio, or at least one of its many editions, was reviewed back in May 2021. Since then it has continued to evolve. As we’ll see, some of the limitations that were present in earlier versions have now been removed, there are three new pairs of headphones supported, and it now runs as an M1 native application on new Macs, but perhaps the biggest development is the Alan Meyerson Signature Edition. This is a new product, which is not included in any existing Embody subscriptions or bundles.

Alan Meyerson is, of course, one of Hollywood’s leading film score mixers. Since 2009, he has worked out of Studio M at Hans Zimmer’s Remote Control studios in Santa Monica, California, and it’s this space that has been modelled in the Alan Meyerson Signature Edition of IVS. It is, naturally, a room built to the highest possible standards of acoustic design, but the real difference compared with previous IVS editions is that it’s not limited to stereo. Studio M is equipped with a state‑of‑the‑art 7.1.6 surround monitoring rig, and this has been faithfully reproduced in the plug‑in. In other words, this is a virtual control room designed to allow headphone users to mix Dolby Atmos, Sony 360 and other immersive formats.

The Alan Meyerson Signature Edition can accommodate a wide range of multichannel formats as well as boring old‑fashioned stereo.When I last looked at IVS, it was available only as a plug‑in, with no ‘system‑wide’ or standalone version on offer. That has changed, and the Alan Meyerson Signature Edition now installs in both plug‑in and standalone formats. The latter is a welcome addition in any case, and is necessary for anyone who’s using the Dolby Atmos Renderer outside of their DAW, as it needs to come after the Renderer in the monitoring chain. To use it standalone, you route the output from the Renderer or your DAW to something called the Immerse Audio Bridge. I did my tests on a new Apple M1 MacBook Pro using Logic Pro 10.7.3 and found this connection could be a little bit fragile, especially if the laptop was allowed to go to sleep, but re‑selecting the Bridge in Logic’s Audio Preferences and hitting Apply usually sorted things out.

A new pop‑up selector allows you to choose a Channel Configuration, with numerous different options on offer ranging from stereo up to 7.1.6. This can be a source of considerable confusion, for reasons that are not of Embody’s making. In particular, Logic uses a non‑standard channel ordering which Apple seem to switch around every so often without telling anyone. And just to keep us on our toes, the channel order Logic presents to a plug‑in on the master bus is different to the output channel order that the standalone version sees! Fortunately, you can set up a custom channel configuration of your own simply by dragging the Inputs into a different order, and it’s definitely worth spending an hour or so with some test tones to make sure this is set up correctly.

In the other editions of IVS, you can switch speaker sets by clicking on them. Here, clicking on a speaker solos it, which is invaluable when setting up; there are also options to solo only the height or base‑level speakers. If you find it more inspiring to gaze instead at a big photo of Alan Meyerson or engineer Eva Reistad, head for the View Selector. Speaker solo options are still available in the Main page below. Embody have also addressed several criticisms I made of the earlier versions. It’s now possible to bypass the headphone EQ altogether or set a wet/dry balance, for example, and the limiter is more controllable, with clear visual indication of when limiting is taking place. Output metering now offers RMS or LUFS options, and the processing can be switched to minimum‑phase operation from the default linear‑phase mode. 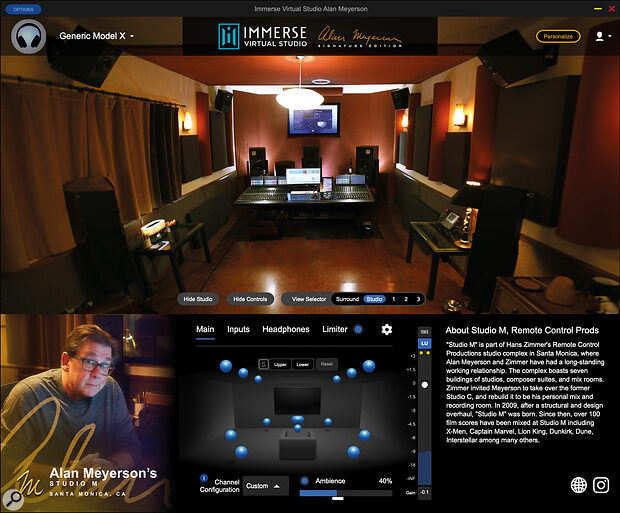 Individual speakers can be soloed or muted by clicking the blue balls in this display, or the speakers themselves in the main Surround view.

Opinions differ about the usefulness of virtual control room plug‑ins. Many feel there’s no point in complicating the process of headphone mixing any further, and that it’s better simply to learn how to use headphones in their raw state. However, that argument applies only to stereo. It’s impossible to monitor an immersive mix on headphones without putting it through a complex process of binaural rendering in any case, so any additional processing that can increase the sense of immersion and spatialisation should be welcome. Does this plug‑in achieve this to an extent that justifies its price?

It’s impossible to monitor an immersive mix on headphones without putting it through a complex process of binaural rendering in any case, so any additional processing that can increase the sense of immersion and spatialisation should be welcome.

In principle, the benefits of a personalised head‑related transfer function and better room modelling should be most noticeable outside the basic stereo field. With a speaker‑based Atmos rig, it’s easy to locate sound sources as being behind or above you. Many people find that this is not carried over onto headphones with generic HRTFs, and that’s certainly my experience. So far as I can judge, IVS Alan Meyerson Signature Edition does improve spatialisation, but it’s quite context‑dependent. For example, if you simply pan a mono source to both of the rear surround speakers and solo it, you won’t suddenly experience the strong sensation that that source is behind you. The sensation of height for static sources is a bit more developed, though again, it’s far from uncanny. But when you start to move things around dynamically within the mix, those sensations seem more concrete, with more positional cues coming in, and you can get a pretty convincing sense that something is flying overhead. I never forgot that I was listening on headphones, or experienced true 360‑degree immersion, but as far as the effect goes, it’s pretty natural and genuinely immersive.

I still don’t think I’d like to mix a surround project using only headphones and a product such as IVS Alan Meyerson Signature Edition, but perhaps that’s not the point. This product perhaps has most to offer for the engineer who has access to an Atmos mix room but can’t be there all the time. If you need to work on immersive projects away from the studio, it can certainly make a difference. Because the effectiveness of binaural processing is so subjective, I can’t give a categorical answer as to how well it’ll work for you, but there’s a two‑week free trial, and if you have the need of such a plug‑in, it’s definitely worth giving it a go. The lifetime licence and subscription options also buck industry trends by being significantly cheaper than the stereo‑only All Access Edition, albeit with only one virtual room rather than five.

The Alan Meyerson Signature Edition extends the concept of the virtual control room to immersive audio, which is perhaps where it is most needed.