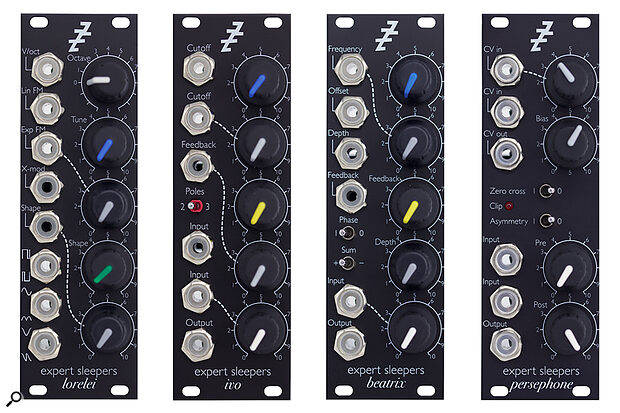 “New modules (not a new Disting)” declared an Expert Sleepers Instagram post shortly before the announcement of a new range of modules: an oscillator, filter, phaser and VCA, respectively christened Lorelei, Ivo, Beatrix and Persephone. It’s understandable to include such a caveat: the acclaimed Swiss Army Knife module Disting has been the company’s flagship product for the best part of eight years, due in part to the fact that Andrew Ostler just won’t leave it alone. No complaints here, of course: the Disting is a once‑in‑a‑generation piece of hardware, offering scores of modules in one with that number increasing all the time. Expert Sleepers excel at the art of the multi‑purpose, and Ostler’s line of modules is an unquestionable pack leader when it comes to assignability, interfacing, conversion, expansion and breakout for Eurorack.

It’s something of a left turn, then, for Expert Sleepers to now release a range of all‑analogue — you might even say ‘traditional’ — modules. No audio interfacing, no digital heart, no assignable controls and multi‑purpose outputs: just a good old‑fashioned filter, oscillator, phaser and VCA. Except that they’re not old‑fashioned at all, as Expert Sleepers take care to point out: in Ostler’s words these are “not adaptations of historic designs or clones, these have all been crafted to offer something a little bit different”. And he’s not wrong.

Each measuring a comfortable 8HP, these modules both look and feel nice, with characteristically good design and build quality. One thing I’ve always liked about Expert Sleepers’ panels is the coloured LED rings around their patchpoints, showing red for positive voltage, blue for negative, and purple for signals oscillating quickly between the two, like audio. They’re incredibly useful as a visual cue for voltage coming in and out of a module and a design characteristic I can’t believe isn’t more common. Plus, they’re very pretty. Expert Sleepers have also tweaked their knob design for most of these modules, adding a little colour to help differentiate functions. Perhaps because here for (almost) the first time, each knob only does one thing.

Expert Sleepers Lorelei.Lorelei is an oscillator offering variable waveforms across three outputs. The first output is for a pulse‑width‑variable square wave, the second is for a sine wave and the third is for cosine. These last two are based on quadrature sine waves — that is, waves which are 90 degrees out of phase — meaning that they can be shaped to resemble triangle and saw waves respectively with the master Shape knob, which also controls the pulse width of the square wave. Much is possible with these three outputs and the Shape control alone, but Lorelei goes further to offer linear and exponential FM inputs, as well as a cross‑modulation/sync input for some highly inventive and excellent‑sounding voices.

It’s worth mentioning that Lorelei’s take on sync is slightly different to that of many other oscillators: ordinarily a sync’ed wave’s ramp will be forced to reset according to the frequency of an incoming signal, but here when the incoming signal goes above a certain threshold — around 3.3V, we’re told — it momentarily pauses the oscillation of the other wave, which I found made for some interesting results as I experimented with various waveforms and frequencies. The Shape parameter range is wide, to the extent where the pulse width of the square wave becomes inaudible, so it’s possible to achieve some nice envelope effects with an LFO alone. With the addition of an external audio‑rate oscillation and an LFO or two for simple modulation of the FM and ‘X‑mod’ inputs I was able to create some rich and wild tones.

Expert Sleepers Ivo.Next is a switchable low‑pass filter named Ivo (that sentence belongs in a children’s book on Eurorack). Immediately what I liked about Ivo was how, with its dual cutoff inputs, dual audio inputs and two filter settings, it gave me something like two modules in one. I say ‘something like’ because these are summed to one output, so by no means independent of one another — indeed I achieved the best results when playing them off one another. The 2‑pole setting, with its 12dB/octave ratio, is capable of some filthy, acidic filtering across a wide range, encouraging liberal use of the feedback (that is, resonance) parameter. The 3‑pole setting, meanwhile, which works at a steeper 18dB per octave, is gentle and warm, rendering the feedback parameter a somewhat classier tone‑shaping tool.

As you’d expect, there are CV inputs for all parameters. The secondary cutoff and input sockets have attenuators, and altogether open up masses of possibility, be it summing two difference waveforms from the same oscillator or — as I found highly gratifying — two different melodic sequences, which, with a fairly high feedback setting, will excite the resonance at interesting intervals dependent on how they converge.

Expert Sleepers Beatrix.Next up we have Beatrix the phaser (see previous children’s book aside), perhaps the odd one out of the four in that it’s an effects unit and not a core synthesis constituent. Immediately obvious is the amount of possibility in the offing when voltage control is offered over notch frequencies, depth and feedback, not to mention the notable inclusion of an offset control which essentially allows you to maintain a consistent resonance while moving through the phaser stages.

The phaser itself sounds great. It has a wide variety of character on offer within its range; from watery, swooshing phase to more of a classic, MXR Phase 90‑style sound. The panel contains two toggle switches, a ‘sum’ switch to invert the filtered signal and thus bring out a different character in the result, and interestingly a switch simply labelled ‘phase’, which actually disables the phasing altogether. This is useful in a performance setting for sure, but also brings out a quasi‑filter function in Beatrix, complete with resonant feedback if you so choose.

Lastly comes Persephone the VCA. If you are looking for a four‑in‑one stack of utility VCA circuits then this is not for you. If, however, you’re in need of a creative VCA which actually works with the character of your patches and is tuneable to respond differently to different sounds in your system, I genuinely cannot fault the Persephone for its functionality or for its scope.

Expert Sleepers Persephone.Its headline function is a zero‑cross detector — that is, it detects the closest point in a wave where it crosses zero and thus, like magic, eliminates the clicks that often plague VCAs when using sharp gate responses. Of course, sometimes such clicks can be creative, especially when using audio‑rate waves as your VCA’s CV control. No bother, simply switch the zero‑cross detector off. And then on again, to see the difference between the two. I mention this because it’s a microcosm of Expert Sleepers’ approach to these modules — care has been taken care to fulfil their fundamental functions well (indeed there is a section of the Persephone’s manual on how to set it to behave like a ‘regular VCA’), but there’s also a tangible move to go further in certain areas and really stretch their application. The actual tone of the Persephone is glorious. Its gain element is a discrete JFET, which sounds clean and clear but can be cranked to achieve anything from tuneful saturation to outright harmonic distortion. There’s an asymmetry switch to augment the module’s responses to positive and negative voltages, and a bias knob to adjust the interaction between the CV inputs’ Sample & Hold circuit and the VCA itself. Overall, and I do not say this lightly, the Persephone is probably the best small‑format VCA I have come across in Eurorack, and when working in tandem with the Ivo is almost the complete package for Eurorack tone control. Two of each to process my stereo mixer outputs? Yes please.

Separate modules these four may be — and perhaps I’m saying this because I received them at the same time — but Lorelei, Ivo, Beatrix and Persephone really are in their element when playing together. I can certainly imagine, easily in fact, the Ivo and Beatrix modules amalgamated on a single panel. Expert Sleepers need only release an analogue sequencer and a function generator of some description to complete a small standalone Expert Sleepers system. If that turns out to be the case, and those modules are as impressive as these four, resistance will be futile.