Digital Sampling: The Design And Use Of Music Technologies

When it comes to history, there are typically two ways of looking at a subject. One is to examine it from an emotional perspective, waxing lyrical with anecdotes, tall tales and very much through rose‑tinted glasses. The other is to forensically examine the facts, seek out first‑person testimonies, check, verify, corroborate and verify again all of the dates, persons, locations and details, referencing sources meticulously so that no doubt and no emotion remain. Of course, it’s often the case that the sweet spot between both these methods is where balance is achieved. For example, the origin of the first ever digital sample captured by the inventors of the Fairlight CMI is rarely called into question, with all parties agreeing what the sample source was. How that sample was captured, on the other hand, and by whom, is not so crystal clear. 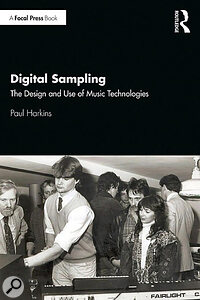 It is this kind of quandary, along with many other key and crucial moments in the history of the birth of digital sampling, that Paul Harkins, lecturer in the music department at Edinburgh Napier University, seeks to reveal the truth about in his book Digital Sampling: The Design And Use Of Music Technologies (Routledge, ISBN 9780815381648) — and he does so without sacrificing the magic of the anecdotal yarns spun by people who were around at the time.

He rightly starts with the Fairlight CMI; this was the world’s first commercially available digital sampler. He covers the initial impact of the Series I and II, before moving on to the impact of Page R, the first on‑screen, computer‑based sequencer, how looping delivered a new way of making music, and then the pristine qualities of the 16‑bit, 100kHz Series III. He then addresses the next big player in the sampling arena, Dave Rossum’s E‑mu, and looks at the various sample‑based tools that they developed throughout the ’80s, such as the Emulator sampling keyboard and their more rhythm‑ and loop‑focused SP range.

But, fascinating as it is, this book does not simply wallow in the history of sampling. The second half of the book takes in four case studies, looking at artists that use sampling in fascinating ways, taking in such people and topics as Akufen and Todd Edwards and their use of micro sampling; foot pedals and folk music as used by King Creosote; the use of found sounds by aptly‑named Edinburgh collective Found; and the highly constrained yet utterly fascinating methods employed by Matthew Herbert, who uses a set of hugely restrictive, self‑imposed rules when looking for sample sources that results in a form of modern musique concrète.

The text is supported not only by a range of great photographs and images of advertisements from back in the day — these help to conjure up the magic and wonder of what was a ground‑breaking technology at the time — but also a large number of quotes from proponents and key players involved in the invention, creation and use of samplers. Many of these derive from interviews conducted by Paul himself, including with Peter Vogel, Kim Ryrie, JJ Jeczalik, Arthur Baker, Peter Howell, Richard James Burgess, Dave Rossum, Scott Wedge, and many more.

As you’d expect from a book rooted in the academic world, there’s a plethora of footnotes and references, as well as an extensive bibliography that could aid you in your own research or simply serve to underline the extensive research that underpins this publication.

I often find myself at odds with the academic world when it comes to the way music technology is studied and portrayed. As someone who uses these machines, restores them and waxes lyrical about them to anyone who cares to listen, I often find academic research into these things rather sterile, devoid of feeling and, in some cases, quite flowery and off the mark, hypothesising as some do about the intentions of the inventors or users. Quite often, those that created or used these marvellous tools had no ambition or higher calling other than to enable or be enabled by some brilliant technology that allowed them to create something exciting. To imply some ulterior motive beyond that can sometimes be to gloss over the very base and instinctual urge to simply have fun making music.

I often find academic research into these things rather sterile, devoid of feeling, quite flowery and off the mark... Harkins avoids this.

Harkins avoids this by speaking to the protagonists, rather than speculating; by referencing their work directly and piecing together various parts of history. The reader comes away with a much clearer narrative on the subject and a solid understanding of how much of an impact sampling has had since Vogel & Ryrie cooked it up as a ‘workaround’ on their first‑iteration Fairlight CMI. It is astounding that this so‑called ‘cheat’ literally changed the way we make music forever, spawned a vast array of other music‑making tools, established a whole new way for lawyers to make money, and became the global standard in audio and music technology that it is today.

Although this book is not in the same realm as something written by, say, Simon Reynolds or Jon Savage, which weaves a fantastic tale through music history, it still manages to lead the reader on a hugely interesting journey into the birth of sampling, involving the key movers and players, whilst also exploring how far the medium has evolved since then. For anyone with even a remote interest in digital sampling — academic, synth‑geek or otherwise — it’s a great read from beginning to end.