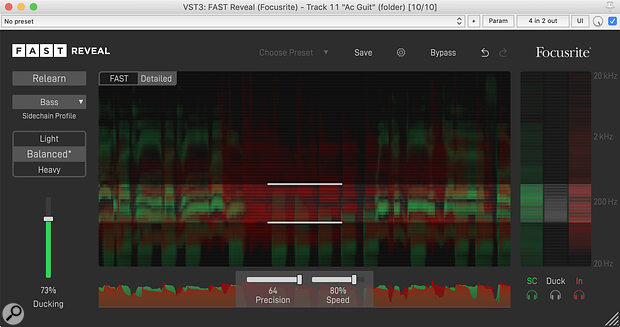 FAST Reveal is designed to make it easy to tackle masking problems in your mix.

Focusrite’s new FAST AI‑driven plug‑ins, developed in partnership with Sonible, are all designed to overcome what are often frustrating problems for beginners and inexperienced learners, while at the same time giving visual feedback that should help the user on their learning path. Each one offers two main views: FAST, with only a few key controls, and Detailed, where the user has more scope to tweak. There’s also an emphasis on intuitive metering and optional tool‑tips to guide you along the way. There are currently three plug‑ins in this range (a compressor, an EQ and Reveal) [a fourth plug-in, FAST Verb, was added on 21 October 2021 read the SOS review] though more will be added, and the pricing model is rent‑to‑own: you pay a small monthly subscription fee which you can cancel at any time, but keep up the payments for 15 months and it’s all yours. The plug‑ins support AAX, AU and VST hosts on Mac and Windows computers.

FAST Reveal (I’ll call it Reveal from hereon) is a spectral ducker — a sophisticated take on side‑chain compression — that aims to make it easy to tackle problems caused by masking, an annoying phenomenon whereby frequencies in some sources obscure those in others. Often, it can make sounds seem to drift in and out of a mix and, for example, lyrical intelligibility can often be compromised. Where attempts to correct this with EQ, compression and level automation fail, a popular tactic is ‘ducking’: you use the part you want to hear more clearly to trigger compression of a sound that’s getting in the way. Well, Reveal takes this idea several steps further...

At Reveal’s heart is a ‘many‑band’ compressor — think multiband compressor, but with up to 64 frequency bands. The number of bands is set automatically when you choose a preset in FAST view (you can change this in Detailed view). By separately targeting the different frequency bands in which two sources overlap, Reveal’s ducking ‘reveals’ the more important sound while inflicting less damage on the other than conventional side‑chain compression often can. But it also gives you a big helping hand in finding appropriate settings.

To get started, you instantiate the plug‑in on the part you wish to duck and route the signal you want it to make way for to Reveal’s side‑chain input. Then select a Sidechain Profile, which is a preset with ball‑park settings for different sources, which can be refined in Detailed view: Speech, Vocals, Guitar, Bass, Kick and Drums are joined by a catch‑all Universal option. Finally, hit Analyse. Reveal’s GUI darkens for about eight seconds while it analyses the signals and determines where masking problems most likely lie. Reveal then automatically fine‑tunes its settings and gets to work ducking the signal.

In FAST view you can opt for Light, Balanced or Heavy ducking. Light and Balanced tended to work best for me; Heavy usually sounded too obvious unless I made further tweaks in Detailed view. There’s also a Ducking fader, with which you can back off the amount of ducking to taste.

On the right of the GUI is a trio of bar meters for the side‑chain signal, the ducked regions and the input signal. Each is a different colour, with the vertical axis representing frequency and signal presence/strength indicated by opacity. While you must always judge the results by ear, this meter makes it abundantly clear what’s going on and why, and these could prove useful meters even if you were to apply no processing. A headphone button beneath each bar solos the audio and graphical history display for that signal, which can be interesting. Curiously, the soloed side‑chain signal wasn’t delay compensated in Reaper, so acted as a sort of slap‑back delay effect. It’s not a major problem (it’s easy enough to solo that signal in your DAW rather than the plug‑in if you need to), and Focusrite tell me they’re aware of the issue and that it doesn’t affect all DAWs; I hope it will be addressed soon.

Detailed view is the same as FAST view but has a few more controls. A pair of horizontal bars overlaid on the history display can be dragged up/down to target the ducking frequency range more precisely. And two sliders specify the Speed (combined attack and release times) and Precision (the number of compressor bands). The Sidechain Profiles are essentially preset combinations of these four controls.

I retain a healthy scepticism when it comes to automatic processors but have to admit that Reveal works very well.

I retain a healthy scepticism when it comes to automatic processors but have to admit that Reveal works very well. As well as trying it in obvious applications (eg. creating space in a piano/guitar part for a lead vocal, and in a bass guitar for a kick drum, both challenges which it met with aplomb), I used Reveal to refine the relationship between various sources, and it was often very effective. It got a troublesome ‘boom‑chaka’‑style acoustic guitar to sit better alongside a bass guitar and lead vocal; having ducked the offending frequencies in the guitar just a touch when those other parts played, I found I could roll the guitar’s high‑pass filters down, making the guitar seem a touch warmer and fuller without intruding on the bass, and nudge the part up a couple of dB more without intruding on the vocal. It was also helpful when working with big washes of reverb and delay, as when feeding a lead vocal or guitar through a Space Echo; ducking the offending frequencies fairly assertively turned the Ducking percentage setting into a handy ‘sit that tail in the mix’ control.

I wouldn’t want to put an instance of Reveal on every source in a mix; things would get over‑complicated very quickly. I should also stress that the problems Reveal is designed to solve are often best tackled by making tweaks to the arrangement, or by choosing/capturing better sounds in the first place. But that’s not always an option when mixing, and when you need another way Reveal will often get you where you want to be quickly, with minimal fuss. While no plug‑in can be idiot‑proof — things can get a little warbly if you’re too heavy‑handed here — the presets land you in the right ballpark, and Focusrite’s work to make Reveal beginner‑friendly has definitely paid off. There are mercifully few controls, it’s easy to get a useful result, and you might just learn something along the way. Recommended.

Pay‑as‑you‑go model: 15 monthly payments of £5.99 including VAT, and unlimited access thereafter. Subscribers can cancel at any time.

Pay as you go model: 15 monthly payments of $5.99, and unlimited access thereafter. Subscribers can cancel at any time.