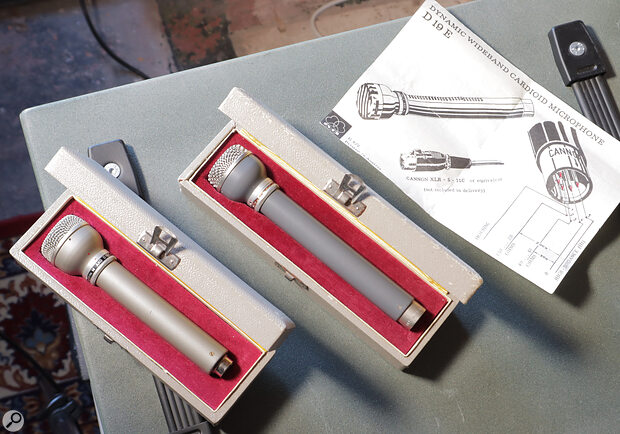 The D19E (right) has a longer body than the D19C (left) to accommodate its annoying five‑pin XLR connector.

We kick off a new series profiling classic studio equipment with a look at a humble dynamic mic that has passed into Liverpudlian legend.

An association with the Beatles never did anything any harm, but few pieces of studio kit have gained more from it than the AKG D19. Abbey Road engineers used this modest moving‑coil dynamic as a drum overhead on most of the band’s early records, earning it the nickname the ‘Ringo mic’.

In fact, the D19 was pretty ubiquitous in the ’60s. It did duty with thousands of other bands in sessions and on stages, and was sold to home‑recording enthusiasts as well as broadcasters and studios. Introduced around 1957, it went through several evolutions in its long career, and was sold as an OEM item under numerous other brands, including Philips, Telefunken, Norelco, Revox and Uher. Hundreds of thousands were sold in all, making this one of the few items of classic gear that you stand a realistic chance of finding at a car boot sale.

What’s special about the D19? Well, it’s a smart‑looking mic, and a fair bit smaller than most comparable designs, which no doubt endeared it to TV directors. But take a closer look and you’ll see that the D19’s metal shell has a series of rectangular slots running down it. These implement AKG’s own interpretation of the ‘Variable‑D’ technology invented by Electro‑Voice and used in mics like the RE15 and RE20. I’ve never managed to discover whether AKG officially licensed this technology or simply adapted it in some way that avoided infringing EV’s patent, but either way, it serves the same purpose here: to minimise proximity effect.

The D19 thus doesn’t suffer the same ‘bass tip‑up’ as other directional microphones, and has a tone that is very consistent regardless of distance from the source. For its time, it was also a relatively hi‑fi microphone, with an advertised frequency response that spanned 60Hz to 15kHz. To all extents and purposes, this represented the full audible frequency spectrum; there wasn’t much recording or replay equipment around that could handle signals above 15kHz.

An unusual design feature is the ‘collar’ around the bass of the capsule. Many dynamic mics from this period could be toggled between Speech and Music modes, usually by switching a high‑pass filter in and out of circuit. AKG achieved the same functionality acoustically: rotating the collar opens or closes a vent behind the capsule, respectively allowing and blocking low‑frequency sound from being picked up. Unfortunately this collar is secured with a minuscule grub screw that often goes missing.

Ohms On The Range

Many variants of the D19 were made, and as AKG’s record‑keeping was notoriously haphazard, a complete timeline is hard to put together. There were at least three minor variations in the capsule design, which can’t easily be discerned from the outside. Other variations were reflected in the letters after the model number. The D19C used a three‑pin locking DIN connector, sometimes known as a ‘small Tuchel’. The D19E used an XLR but, oddly, AKG chose to equip it with a five‑pin connector, so whichever D19 you get, you’re going to need an adaptor cable.

There was also a D19B; it’s not clear what the B referred to, but some D19Bs were designated BK Hi. The K indicates that they had a captive cable rather than an output connector, and the Hi that they had a high‑impedance output for connecting to domestic tape recorders. If you want to use one of these in a modern context, you’ll need to perform delicate surgery to remove the output transformer. Some D19s also had an incongruously large on/off switch, and these have the suffix S added.

The C variant was designated either C60 or C200, reflecting the fact that the mic could be ordered with a 60Ω or 200Ω output impedance. Both are perfectly usable, but you’ll need more preamp gain with the 60Ω version. The five pins of the D19E’s connector actually presented all three options — 60Ω, 200Ω and 50kΩ ‘Hi’ — so you can choose which to use by wiring up the adaptor cable appropriately.

The Beatles association has made D19s more desirable today than contemporaries like the Shure Unidyne or Electro‑Voice RE10. That might seem odd, because you rarely see them being used today as drum overheads! There’s a limited appetite for recreating the early Beatles drum sound, and that sound has more to do with Ringo’s idiosyncratic style in any case, not to mention Abbey Road’s tendency to run the humble D19 through some not‑at‑all‑humble high‑end compressors.

There are some mics that you can put up on almost anything and get a good sound. I’m not convinced the D19 falls into that category, but it certainly has its uses in the modern studio. It’s a fantastic tom mic — much better, in my opinion, than the ubiquitous Sennheiser MD421 — and can work really well on some vocalists. But where it really shines, for me, is on acoustic guitar. There aren’t many dynamic mics that you could describe as ‘airy’, but the D19 is definitely among them, and its frequency response seems perfectly tailored for the instrument. On typical capacitor mics, this airiness is accompanied by an uncomfortable emphasis on transients and a proximity effect that can be hard to control. Not so here: you can jam a D19 a couple of inches from the guitar body and it’ll still sound great. Just make sure your preamp can deliver plenty of clean gain.

There are some mics that you can put up on almost anything and get a good sound. I’m not convinced the D19 falls into that category, but it certainly has its uses in the modern studio.

As I said earlier, the D19 is not a rare mic. It also has a reputation for being unreliable and difficult or impossible to repair, and the ones that still work don’t always sound like they should. So be wary of paying the inflated prices that many eBay and Reverb sellers are asking, and make sure you have the option to return it if it doesn’t sound good. To my mind there is no good reason to pay extra for a D24; these, too, are reasonably common and sound exactly the same. The D119, on the other hand, is very hard to find, but also much less well‑known, so can represent a potential bargain. Likewise, the OEM variants sold under other names sometimes crop up for sale cheaply. Don’t write off examples with a non‑working bass roll‑off, either; you won’t often want to use this feature, and even if the grub screw has gone walkabout, the filter itself can still be moved with a needle or other sharp pointy thing.

Avoid the high‑impedance models with captive cables unless you’re getting a bargain, because they aren’t usable as‑is, and bear in mind that almost all of the others will require an adaptor cable. Five‑pin female XLR plugs are widely available, and Canford still sell the Binder 680 DIN connector, so if you’re handy with a soldering iron, it’s not hard to make your own. Look out for factory accessories, too; a dedicated tabletop stand was available, as was a huge windscreen for outdoor use that enclosed the entire mic. And if a D19 comes with the original fitted wooden box and documentation, the chances are it’s been well looked after.

Frank Sinatra was known to favour the Telefunken U47, but if you look up studio footage of the sessions for ‘It Was A Very Good Year’ on YouTube, you’ll hear that he sounded pretty good through an AKG D24 too. Contemporaneous with the D19, this is to all intents and purposes the same microphone, but with a spherical headbasket. In an era when capsules were handmade and tended to vary in quality, it’s been suggested that AKG reserved the best ones for the D24, thus justifying its higher price. It too was available in 60Ω and 200Ω versions with a choice of DIN and XLR outputs, but in this case the XLR was a conventional three‑pin connector. At the close of the 1960s, the D19 and D24 were briefly superseded by the D119, which retained the same capsule in a much uglier housing. 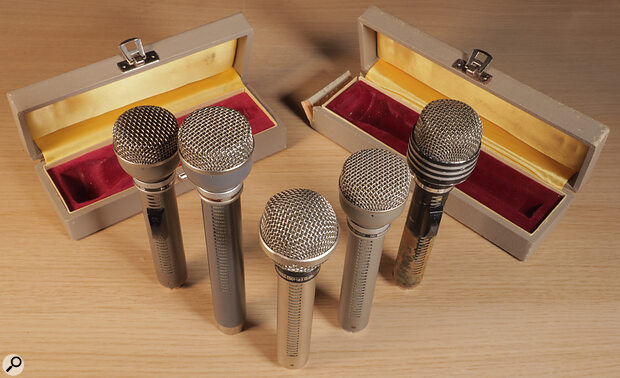 Sonically, there is far more variation among individual D19s than there is between any of these three models, and they are pretty much interchangeable. The ravages of time are likely to have eroded any sonic advantage that the D24 might once have had over the cheaper D19.

Just to fool the unwary, AKG also made numerous mic models that seem as though they ought to be related to the D19, but aren’t. Prominent among these is the confusingly named D190, a cheap and cheerful mic that sold bucketloads in the ’70s and sounds nothing like a D19. The D120, D140 and D160 likewise bear a passing resemblance to the D24 but are, as far as I know, completely different.