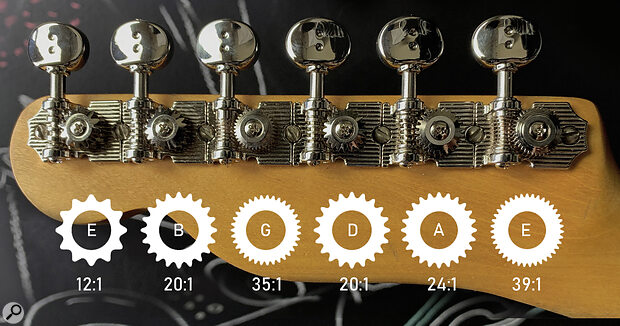 Stringed instruments were originally tuned using wooden pegs jammed into holes — indeed, some still are — but the geared tuning machine, as used on modern guitars, brought a little precision and stability to the process. To achieve more accurate tuning, higher gear ratios were adopted over the years, with 18:1 being typical. Graph Tech’s new RATIO tuners take the geared tuner concept further, in an attempt to solve an issue that most players probably don’t even recognise as being a problem, because they’ve used conventional machine heads all of their playing life.

If you analyse what’s going on when you tune a string, you’ll find that less movement is needed to deliver the same pitch change on the bottom E than on the top E, and this means that the tuning of the lower strings requires more precision on behalf of the user. Graph Tech reasoned that if they were going to offer a quality replacement machine head, they may as well fix these gearing inequalities, so what they came up with is a design that uses a different gear ratio for each string, the idea being to even out the amount of rotation required to bring about the same change in pitch.

The optimum ratio is related to a string’s core diameter, rather than its outer diameter, and the gearing for electric guitar sets starting from the bottom E is 38:1, 24:1, 20:1, 35:1, 20:1 and 12:1. The outcome is that one turn of each tuner results in approximately one tone in pitch change for all strings. As the gear ratio gets higher, the gear teeth get smaller so, to maintain reliability, GraphTech use a double‑envelope gear profile, in which both the gear and worm are shaped to maximise the contact area for the gear teeth — that’s something you don’t get with a standard worm gear assembly. The range includes open‑backed, close‑backed and locking versions of the tuners with chrome, gold, nickel or black finishes.

There’s also an advantage in the studio, as it makes precise tuning up that little bit easier.

The set I was sent for review were open‑backed, slotted‑post tuners with Kluson hole spacing. These come with 8mm bushes and screws to fit a standard Strat or Tele headstock, but you can also get three‑a‑side, acoustic, ukulele and bass versions. If you don’t want to drill non‑standard holes in your vintage guitar, don’t worry: Graph Tech can also provide optional adaptor mounting plates to fit the most common tuner screw hole profiles.

My initial inspection confirmed that the standard of engineering is excellent, so all that remained was to fit them and see how the new ratios felt. I opted to fit the tuners to a Tele‑type guitar fitted with a Hohner neck. Its hole spacings are just a mm or two wider than optimum for Kluson pattern tuners but, by using oversized screws for all but the end screws (which is how the previous tuners were fitted), I managed to fit the new RATIO tuners firmly in place. A few minutes later and I was restrung and tuning up.

Some may ask if these tuners are a solution to a problem that doesn’t really exist, and of course people have made do with conventional machine heads for generations. However, the world always appreciates ‘a better mousetrap’ and that is essentially what we have here — something that does an existing job that little bit better.
Certainly the lower strings and that awkward plain G are noticeably easier to tune, and for guitarists who constantly switch between open tunings, that could be a real benefit. There’s also an advantage in the studio, as it makes precise tuning that little bit easier. So while the world could go on turning without RATIO tuners, it turns just that bit more smoothly with them. These are priced similarly to other high‑end US machine heads, such as those by Sperzel, and are well worth a closer look.