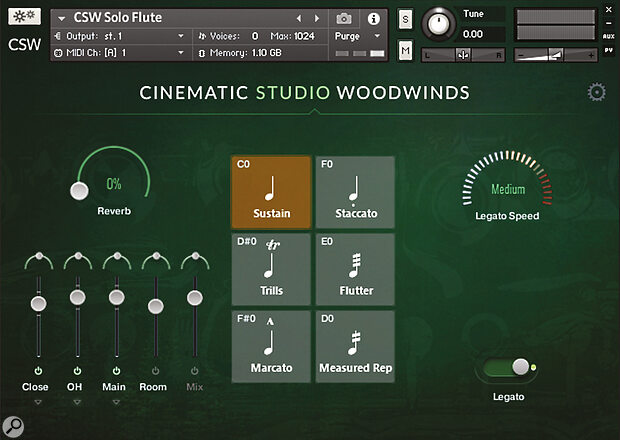 The Cinematic Studio Series libraries have earned a prominent place in many composers’ setups, with an enviable reputation for consistency, sound quality, ease of use and some of the best legato scripting on the planet. Consequently, anticipation of this woodwind library has been almost unbearable since its development was announced over two years ago. CSW features a complement of nine solo instruments and four two‑player sections (sometimes referred to as ‘a2’). Notwithstanding one or two omissions such as bass flute and Eb clarinet, all the woodwinds you’d expect to find in any self‑respecting orchestra are present.

At a substantial 105GB in size, CSW is not a trivial download, especially for those with a slow Internet connection. Downloading is done using the dedicated Cinematic Series Installer app; the good news is that the app downloads and installs the library directly to where you want it, rather than downloading a ZIP or RAR file that needs to be extracted afterwards, which would double the amount of disk space required until the ZIP/RAR could be deleted after installation. Despite my allegedly high‑speed connection, I managed no faster than 2.5Mb/sec, which took 11 hours to complete! The library runs in the full version of Kontakt 5.8.1 and above and is authorised using NI’s Native Access app. 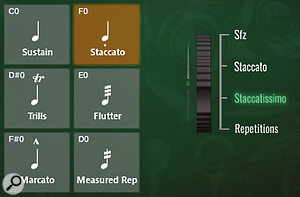 When the Staccato articulation is active, four lengths of shorts are revealed that can be selected using CC1. Keyswitch velocity will also determine which of the four shorts is chosen.The interface will be instantly familiar to anyone acquainted with Cinematic Studio Strings (CSS), Cinematic Studio Brass (CSB) or Cinematic Studio Solo Strings (CSSS); for them no further explanation is necessary, and newcomers to CS products will learn it in minutes. Articulations are selected by keyswitches, or by clicking on the central matrix squares. To the left is the microphone channel mixer [shown in the first screenshot], whilst on the right additional controls appear relevant to the current articulation; for example, if the Staccato articulation is chosen, all four short articulations appear with a mod wheel graphic showing they can be selected with CC1. Rounding off the UI is a level control for the inbuilt reverb, and that’s really all there is to it — simple, elegant and unfussy.

CSW was recorded in the same Trackdown Scoring Stage in Sydney, Australia as the other titles in the series. I really like the ambience of this venue; it sounds lively and spacious with no additional reverb, but still dry enough to carry a decent helping of extra ‘splosh’ without it becoming messy. The inbuilt reverb is very close in character to the sampled ambience, with a longer tail of around two seconds, effectively complementing what’s already there.

Before we get into the instruments themselves, it’s worth pointing out attributes that are common to all instruments, and those that differ. Every articulation has three dynamic layers: pp, mf and ff. Short articulations have three round robins. All sustained articulations feature a legato mode, but only the main Sustain articulation uses the fully featured ‘posh’ legato, discussed later. The main Sustain articulation offers both vibrato and non‑vibrato versions with the exception of the solo clarinet, bass clarinet, contra bassoon and two clarinets, which are non‑vibrato in the ‘classical’ tradition. Legato for all relevant articulations can be disabled for polyphonic playing, gaining attack and release envelope controls. 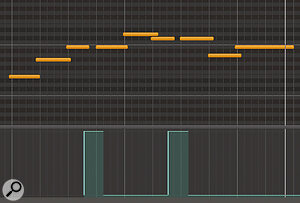 Re‑tongued same‑note repetitions are triggered by connecting them with the sustain pedal.Re‑tongued note repetitions add further realism to the main Sustain articulation — simply hold down the sustain pedal when replaying a note to trigger them. Lastly, the Flutter articulation is only available to the solo flute, alto flute, piccolo and two flutes.

CSW includes four variations of the flute family. The Solo Flute is a delight: crystal clear with just the right amount of breathiness. The vibrato is precisely in the Goldilocks zone — not too little, not too much, with a pleasingly subtle delay before it comes in. Whilst some non‑vibrato sampled flutes tend to be static and lifeless, almost synthetic, this one sounds eminently human. The choice of vibrato/non‑vibrato is controlled by CC2, and since we’re dealing with real sampled vibrato, there’s no control over vibrato depth — it’s either on or off. However, the transition between the two occurs as a timed crossfade that sounds surprisingly natural.

The mysterious, darker tone of the Alto Flute, synonymous with those creeping‑around‑in‑the dark moments, remains consistent in tone right down to its low G2. It’s also well suited to poignant, romantic themes. Piccolos can be tricky to sample well, and even harder to keep under control. CSW’s Piccolo is surprisingly well balanced and controllable, resisting the tendency to decapitate the listener in the higher registers. Thanks to CS’ adaptable legato system, it’s also amazingly athletic for super‑fast runs, particularly with the Marcato articulation. The satisfying richness and warmth of the two Flutes patch hits the spot, delivering mellifluous sustained melodies and precise shorts with a cheeky overblown quality on the highest dynamic. For the even thicker sound of three flutes, layering the a2 with its solo counterpart is a trick that works well with all four of the a2 instruments.

The articulations it provides are versatile enough to cover the majority of composing needs, and its sound is up there with the best of them.

Moving on to the double reeds, the Oboe’s Sustain articulation is friendly and lyrical, evoking bucolic past times without stripping your flesh. Shorts are energetic and jaunty with plenty of dynamics, and if you’re after that in‑your‑face Michael Nyman style, look no further than the Marcato articulation with Spiccato Overlay turned on. The Cor Anglais takes a warmer, more melancholic approach, and is one of the better sampled renditions I’ve heard of this instrument. In its higher register, I’m reminded of that mournful soprano saxophone tone so often featured in 1960s British kitchen sink dramas — quite lovely. CSW’s Bassoon ranges from a baritone Bb0 up to D4 (where Middle C = C3), delivering sustained, plaintive melodic lines and saucy staccatos typical of ‘ironic’ sitcom music with equal efficacy. Reaching down to a flatulent Bb‑1, the Contra bassoon occupies the same physical keyboard range as the bassoon, but is pitched an octave lower. The highest dynamic is rude and bombastic in the lowest register, by contrast sounding delightfully menacing when played softly and layered with CSS’s double basses. Rounding off the collection with single reeds, the clarinet and bass clarinet are non‑vibrato as per the classical ‘norm’. Portamento and glissandi are not included, so for performances of Rhapsody In Blue you’ll need to look elsewhere. Nevertheless the clarinet shines through on melancholic passages, and blends nicely when layered or in harmony with the other woodwinds.

With regard to the entire library, short notes are remarkably agile and consistent in tone, capable of very expressive phrasing when switching judiciously amongst the four lengths. I became quite engrossed playing Ronald Binge’s Elizabethan Serenade on the Solo Flute shorts, which is showing my age. The flutter articulation, only available on the flute patches, performs as expected, as do the trills in minor and major second flavours. Measured Repetitions (double‑tonguing) offer manual or tempo‑sync’ed speeds; it’s a handy tool for live performance or quick sketching, though the meticulous programmer may prefer to generate repetitions by copying a part and shifting it in time, allowing precise control over the volume of the repetitions. This same technique can also be used to create triple and quadruple tonguing effects.

The default ‘pre‑baked’ stereo mix provides a well‑balanced sound that works very well for many applications, and uses the least amount of RAM — an important consideration for less powerful systems. For more specific sound placement, CSW also provides four mic positions: Close, Overheads, Main and Room. I found the Close was best used for blending with the middle‑distance Main and/or far‑distant Room rather than on its own — its release samples can be distractingly loud and need some room ambience to mask them. The Overheads on their own are ideal for bringing instruments to the fore whilst retaining a sense of space, especially if working with longer external reverbs. Mic channels are only loaded into RAM when active, and can be routed to specific Kontakt outputs for individual processing in your DAW.

Combining libraries recorded in different locations can be a challenge if their ambient mic signals are significantly different in length. Drier libraries can be artificially enhanced with reverb, but for those recorded in large venues there’s not much you can do about it if you’re after a dry, intimate sound but can’t completely eliminate the sampled ambience. From that point of view, CSW benefits from its scoring‑stage ambience, being a happy medium that coexists comfortably with wet and dry libraries. The varied perspectives provided by the various mic positions range from close and detailed to a far‑off, ‘supporting role’ distance and anywhere in between. Although CSW lacks extended techniques such as pre‑recorded ornaments and aleatoric effects, the articulations it provides are versatile enough to cover the majority of composing needs, and its sound is up there with the best of them.

One of the first things people ask of an orchestral sample library is “Are the legatos any good?” The CS team have got this down to a fine art, having developed an excellent system for their string and brass libraries; the fruits of their labours have been carried over into CSW. Legato transitions were recorded for all three dynamic layers; the same Advanced legato as found in CSS and CSSS is used, with three speeds of transitions triggered according to key velocity. The slower the speed, the longer the transition, so the slowest legatos will need to be offset by approximately 220ms to sound in time if your part has been quantised. The fastest speed (90 ms delay) is nippy enough to play crisp, fast melodies whilst maintaining a clean, uninterrupted flow and without missing a beat. Whilst you could apply a negative shift to a track to compensate for the transitional delay, it’s not a practical solution if you’re mixing legato speeds — you’ll need to adjust notes individually, for obvious reasons. The Marcato articulation has a further trick up its sleeve, employing a different type of legato optimised for playing lightning‑fast flurries and arpeggios that would have members of John Williams’ orchestra quaking in their boots/kitten heels.

A note about CC1 dynamic control: because of the timbral differences between dynamic layers, and the inherent problems of crossfading between samples with different characteristics, especially vibrato, crossfade transitions are kept short to keep phasing/doubling to a minimum. Timbral changes at those points are more apparent on some instruments than others, although it can vary depending on where in a note’s ‘timeline’ the transition occurs. Sometimes it’s barely noticeable, sometimes more so. I suspect it’s next to impossible to phase‑lock animated samples of this type; at any rate, this issue is far from unique to CSW, and exists in other high‑end sample libraries. The trick is to take care with mod wheel movements, and be prepared to do some ‘massaging’ of CC curves in post. I’ve run this by CS, particularly with respect to the Marcatos, and they are working on improvements for the first update (which may be out by the time this is published), along with a few other first‑release gremlins that slipped through the net.

Quick to learn and easy to use, CSW is a fine collection of woodwind instruments that sound great and sit clearly in a mix. Its operation and many of its features echo those of the strings and brass titles in the CS series, making it an obvious complement to those. While there will always be divided opinion on which product is ‘best’, CSW scores highly for its content, overall sound, consistency and no‑nonsense workflow.