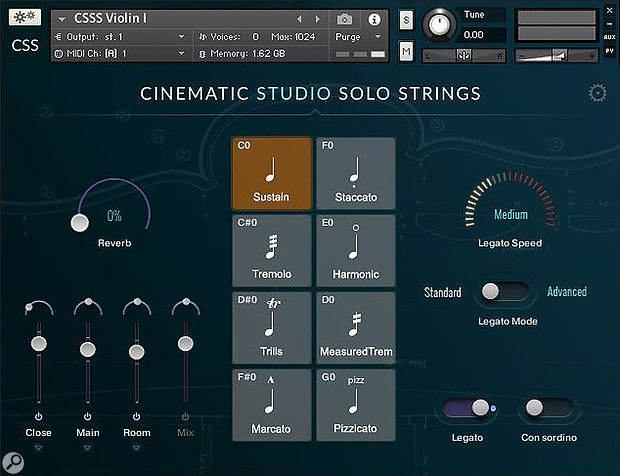 Cinematic Studio turn their sampling expertise towards a quartet of solo strings.

Cinematic Studio continue to grow their series of Kontakt sample libraries with what is very much the sister to their acclaimed Cinematic Studio Strings (henceforth referred to as CSS — reviewed in SOS October 2016). Cinematic Studio Solo Strings (CSSS) comprises Violin 1, Violin 2, Viola and Cello; unlike CSS, there is no double bass. Recorded in the same location as CSS (Sydney’s Trackdown Scoring Stage), it works in its own right as an expressive string quartet library; it’s also designed to complement the full-ensemble CSS library, not only in tone, but in functionality.

Anyone familiar with CSS will immediately recognise CSSS’s GUI as being identical (apart from the colour scheme) to that of CSS. Everything needed to access all the library’s features is there in a single screen, which keeps things blissfully simple, and makes the software very easy to learn. Since the features and operation are paralleled in both libraries, I strongly recommend referring to the review of CSS for a fully detailed description.

The main preset list is short and sweet, consisting of one patch for each of the four section instruments, a Full Ensemble patch (all functions and articulations) and a Lite Ensemble (polyphonic sustain, staccato and pizzicato articulations only). A folder of alternative presets — ‘Classic Legato Patches’ — comprises the same selection of presets; these employ the original legato system (one fixed transition speed) used by Cinematic Strings’ 2012 library, Cinematic Strings 2. This earlier generation of legato works well enough, but there’s no doubt that the main presets’ more sophisticated dual-mode system introduced with CSS is distinctly superior and sounds more realistic.

The close compatibility with CSS is no accident, and for owners of CSS it’s actually one of the most exciting and useful aspects. Since CSSS and CSS share the same recording venue, and all the functions are duplicated, CSSS serves as a perfectly matched group of First Chair players. All you have to do is to copy your CSS violin, viola and cello parts en masse to new tracks, and direct them to play the equivalent instruments in CSSS. All controller changes and keyswitches behave in exactly the same way. The results are well worth the small effort: I can best liken it to applying a Photoshop ‘sharpen’ filter across the strings, bringing out the fine details, and subtly increasing the size of the ensemble.

One point worth mentioning is that CSSS patches load by default with their volume at -6dB, so they are fairly quiet. I can only assume that since CSS’s patches also load at -6dB, this puts the volume of CSSS at a realistic level relative to the larger CSS ensemble. I prefer to set the volume of CSSS considerably higher in relation to CSS, then trim it down until it sits at a level that seems comfortable for the musical context — all personal taste, of course.

With each instrument having 13 articulations to choose from, there are enough variations of playing style to craft convincing and expressive quartet arrangements, melodic solo lines and incisive, energetic rhythmical parts. The recording space contributes a great deal to the samples’ sweet, full-bodied tone. The amount of natural room ambience can be adjusted with the close, main and room mics, though the tone always bears some room coloration, even when using the close mics on their own.

Possibly as a result of being designed to sit naturally with CSS, the Sustain articulations’ highest dynamic range falls just short of the full passionate delivery of a virtuoso soloist. This is most apparent when attempting to play bravura passages on the Violins, especially in the upper registers. The Sustains do have overlay ‘attack’ samples that jump in at velocities of 101 and above, but they’re at a fixed volume relative to the sustain layer, rather than being introduced progressively with higher velocities, and are quite prominent — perhaps too much so. The overlay samples in question sound like the SFZ (sforzando) articulation, which to me doesn’t quite sit comfortably with the Sustains. I can’t help feeling the Spiccato articulation with progressive velocity response might have been a better option for the attack overlay. The Marcato articulation, on the other hand, does use Spiccato for its (optional) overlay, and it’s progressively responsive to velocity. In addition, the Marcatos’ modwheel controlled sustain layer has more ‘oomph’ and a more vigorous vibrato than the Sustains, so with timely alternation between those two articulations (and judicious use of the short articulations) it’s possible to apply additional animation where required.

The Configuration pane; the default MIDI CC assignments can be customised here. Note that CC5 enables or disables the Portamentos — this is one operational difference to CSS, where CC5 alters the actual portamento volume.

Despite saying the functionality of CSSS and CSS is identical, there are actually two factors that differ between the two libraries. The first concerns vibrato; both libraries have vibrato and non-vibrato layers — MIDI CC2 is used to switch from one to the other. However, whereas the vibrato/non-vibrato mix in CSS can be continuously varied with CC2, in CSSS it’s either one or the other — CC2 values less than 64 give non-vibrato, anything higher selects the vibrato samples. Given the nature of sampled solo instruments, it’s understandable why the designers have opted not to enable crossfade from one style to the other — any in-between position would sound very unnatural, like two phasey violins. However, if you change from vib to non-vib (or vice versa) while holding a note, there is a soft ‘take-over’ from one mode to the other, so with careful placement of CC2 values, you can delay the onset of a note’s vibrato in a fairly natural-sounding way. 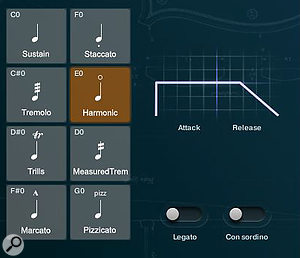 When Legato is turned off, the instrument plays polyphonically, and the Legato controls are replaced by an interactive Attack/Release envelope graphic.The second difference concerns portamento, triggered when playing legato notes at velocities of 20 or less. In CSS, the volume of Portamento transitions can be reduced using MIDI CC5, which can be useful for occasions where the slide is a little too intrusive. In CSSS, MIDI CC5 acts as a portamento on/off switch, not a level control. I’m not sure why this should be, as the CSSS Portamentos (lovely as they are) can sometimes seem unsubtly loud, so the opportunity to tame them would be welcome. Perhaps reinstating CC5 as a level control might be considered in an update?

The Full Ensemble patch, which hasn’t been discussed so far, is more than just a tool for sketching out parts. Because the instruments’ ranges overlap, you’re always hearing at least two instruments layered on each note until you go below the bottom of the Viola’s range (C3, an octave below middle C). Indeed, anything between G4 and G#5 is within the range of all four instruments. The effect is of a small chamber ensemble of at least eight players — and this is a Very Nice Thing. It didn’t take me long to realise that running four instances of the Full Ensemble patch, each playing their own parts (legato) on separate MIDI channels, would sound absolutely gorgeous. Forget spending money on that other chamber ensemble library — CSSS can do the job admirably.

And while we’re on the subject of nice surprises, special mention must be made of the Viola. Viola players are often the butt of jokes (I’ve never been sure why), and as if to affirm that reputation, violas can sometimes be the ‘runt of the litter’ in string sample libraries. In CSSS, however, the balance is redressed: the Viola sounds exquisite and carries melodies like a dream. You might just be tempted to use it for all your featured solo top lines, just so long as the part doesn’t need to go above C#6, the top of its range.

I’m quite smitten by the sweet and generous sound of this library. There’s always the danger of sampled solo strings sounding abrasive and mechanical, but CSSS wraps itself around you like a warm blanket. It would be unfair to compare the extent of its expressive capabilities and articulations with libraries dedicated to a single instrument as it manages to squeeze four instruments into the same size (38GB) that could be taken up by just one of those high-end solo instruments. Using multiple instances of the Full Ensemble patch, CSSS can double as a chamber orchestra to boot, effectively giving you two libraries for the price of one. And then there’s that Viola... For CSS owners, CSSS has to be a no-brainer as a First Chair expansion, and even if you don’t have CSS, this solo string library is an excellent resource in its own right.

The sampling world is not short of solo string libraries, both as all-in-one packages and as libraries devoted to a single instrument. LASS First Chair and Cinestrings Solo are of the all-in-one variety, featuring all the instruments of a string ensemble, and both also include a double bass. VSL also offer Solo Strings I and II — the second volume of which is dedicated to con sordini. If you’re interested in the individual instrument approach, examples of these include Embertone’s Friedlander Violin, Fischer Viola, Blakus Cello, and Joshua Bell Violin. The individual instruments of Chris Hein’s Solo Strings can be bought separately or as a bundle; the Violin package includes two different violins, and the Cello offers two different celli. However, whilst being exceptionally detailed and deeply sampled, the total cost of assembling a full string ensemble as individual instrument libraries will be prohibitive to many.

With good arrangements and thoughtful programming, CSSS sounds like a very expressive and convincing string quartet. Close compatibility with the full-ensemble CSS library makes it especially effective when used as First Chair players for CSS, bringing enhanced clarity and sharper focus to the overall ensemble.