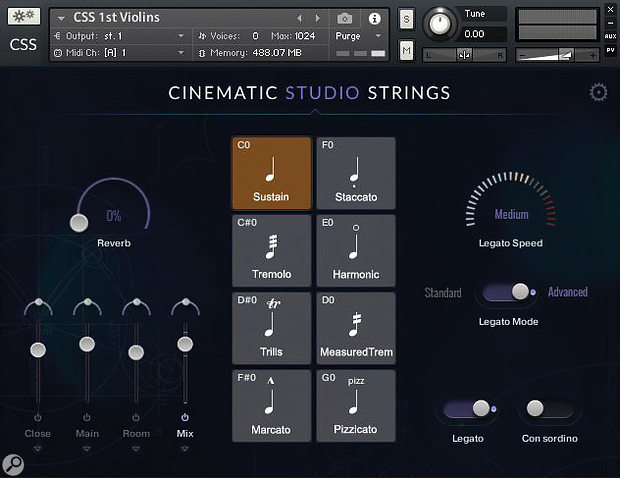 Cinematic Studio Strings (CSS) is the first of Cinematic Samples’ Kontakt-hosted orchestral Studio series. Brass, Woodwind, Percussion and Solo Strings libraries are planned for future release, and a Piano (CSP) is also currently available. Any similarity of CSS to the same company’s Cinematic Strings 2 library (CS2, reviewed in SOS June 2012), is not surprising. CSS builds upon CS2’s ethos, but this is an entirely new library, recorded in Sydney’s Trackdown Scoring Stage, with a Hollywood-style sound aimed squarely at film, TV and game composers. It includes several new articulations, a hugely improved legato system and the ability to route mics to different Kontakt outputs, among other things — more on all these features later. We’re certainly not short of in-depth string libraries to choose from, so any new library that not only sounds great, but is a doddle to use and doesn’t cost the earth, is a good thing, and CSS scores highly on all three counts.

CSS’s list of patches is refreshingly short, with one patch for each of the 1st Violin, 2nd Violin, Viola, Cello and Bass sections, plus Full Ensemble and Lite Ensemble. The Lite version contains three basic articulations, and has no Legato mode; all other patches offer the full shooting match. All articulations and functions are accessible from one very clear, uncluttered GUI, rendered in what you might call a post-modern graphic style. The number of players in each section is as follows: 10 1st violins, seven 2nd violins, seven violas, six cellos and five basses.

These are slightly smaller sections than those often encountered in other ‘epic’ libraries, yet the sound is full and lush; the smaller player count allows each section’s beautifully detailed vibrato to shine through with clarity, especially in the violins. Although CSS has no dedicated system for handling divisi, it seems not to suffer unduly from ‘multiplied player bloat’ when doing divisi parts, again probably thanks to the relatively conservative player count. Tone and volume are admirably consistent from top to bottom in all sections; the bass sustains in particular are probably the most consistent I’ve heard in a sample library.

Articulations can be selected in three ways: keyswitches, MIDI CC, or by clicking directly on the GUI. If the default keyswitch locations don’t suit you, they can be remapped to your preferred layout. Alternatively, MIDI CC58 can be used to step through every available articulation, with the advantage that your DAW can ‘chase’ the values so the correct articulation comes up wherever you start playback in the piece. Clicking the cog icon at top right opens a configuration pane, where all the default MIDI CCs can be altered to your preference. The mic level faders on the left can be assigned MIDI controllers via the usual right-click MIDI Learn method, but no MIDI is assignable to the panning controls or the reverb amount — these are strictly ‘set and forget’.

The Configuration pane is where the default MIDI CC assignments can be customised. Note that Portamento volume can be lowered using CC5 — useful for exposed passages where the effect may need to be a little more subtle.

The dynamics of long note articulations (sustain, tremolo, harmonics, marcato, trills) are controlled by the mod wheel. The sustain, tremolo and marcato were sampled at four dynamic layers, with vibrato increasing in intensity for each dynamic layer of the sustains and marcato. This gradation is particularly dramatic in the sustains, giving a progression from silky smooth pp to a distinctly passionate delivery in the ff layer. Unique to the sustains is a separate layer of non-vibrato samples; the balance of vibrato to non-vibrato is controlled by CC2, with full vibrato being at 127, cross-fading to non-vibrato at 0. At the time of writing, there is an issue concerning CC2’s crossfading behaviour; this has been acknowledged by the designers and will hopefully have been resolved by the time you read this.

Marcato is an especially versatile articulation; its dynamics are controlled by a combination of mod wheel and key velocity, together with an optional velocity sensitive spiccato overlay, ideal for adding extra emphasis to specific notes in a phrase. With Legato engaged, fast runs and arpeggios take on the characteristic ‘blurred’ effect of multiple players’ hands scurrying (albeit very accurately) up and down the fingerboard — particularly effective on the violins. With the spiccato overlay on, marcato’s two-way dynamic control and long sustain make it excellent for performing incisive expressions such as sforzando and decrescendo, full-on emotive melodies and forceful cello and bass lines.

Major and minor trills are both handled by the same articulation; simply play two simultaneously starting notes a major or minor second apart, and CSS plays trills at the appropriate intervals. This also works polyphonically (legato off), so you can combine multiple major and minor trills at the same time. For example, playing a cluster of C, D, E, F#, G and A will produce a trilled C major chord; C, D, Eb, F, G and Ab make a C minor trill that conforms to the notes in the minor scale, whilst C, Db, Eb, Fb (E), G and Ab would make a chromatic minor trill. Be aware that ‘orphan’ notes not accompanied by a major or minor second won’t make any sound at all!

Short note articulations (staccato, pizzicato, measured tremolo) all operate polyphonically, with dynamics controlled by key velocity. Staccato and pizzicato both present further articulations: the right side of the GUI changes for each of these to show a mod-wheel graphic and the various articulation options. These can be selected in two ways: either by moving the mod wheel, or by the velocity at which you press the relevant keyswitch. Staccato presents four options: spiccato is the shortest, with a lovely feathery bounce; staccatissimo is short and played on the bow; staccato, slightly longer; and the longest, sforzando, which decays to silence, rather than swelling up again as might be expected. As mentioned above, the marcato articulation is the place to go for sculpting custom-made sforzandi and other incisive dynamic shapes; nevertheless, this ‘short sfz’ is a welcome inclusion, handy for delivering emphatic punctuations and endings.

Pizzicato offers standard pizz, Bartok snaps and col legno. The col legno sounds delightfully mischievous, and although it is meant to be a delicate effect, I feel it could do with just a tad more volume relative to the other two. The measured tremolo articulation (based on the spiccato samples) uses scripting to generate single 16th-note repeats at a slightly lower volume than the initial note; the repeat rate can be sync’d to the host tempo, or set manually. Simply play a series of eighth notes to get an energetic 16th-note flurry. This is far more flexible than having a continuously running pattern, as you can freely vary the velocity of notes on the fly to create any rhythmic emphasis you want — Vivaldi would surely have loved this for making ‘Four Seasons Winter’ mockups. I’d like to have seen some means of adjusting the relative volumes of the repeated notes. In denser arrangements they can tend to get lost, so you only really perceive the eighths. 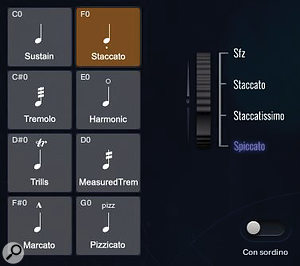 When the staccato or pizzicato articulations are active, the right side of the GUI shows the articulation variations selectable by moving the mod wheel.

CSS’s Instruments browser includes an additional folder, ‘Classic Legato Patches’, containing the same complement of patches as those in the main list: these emulate the original type of legato used by CS2. However, CSS’s vastly improved legato (for the sustain articulation) offered by the main patches is highly recommended. There are two legato modes, standard and advanced. Standard provides two transition speeds, medium and fast, the choice of which is determined by the key velocity of legato notes. Velocities between 21 and 63 select medium, whilst anything between 64 and 127 selects fast. The icing on the cake occurs with velocities of 20 or lower: this triggers a beautiful portamento slide, an essential device for adding realism and emotional impact.

Advanced mode has three transition speeds, covering different velocity ranges: 21-64 = slow, 65-100 = medium, 101-127 = fast, with portamento being 20 or below, as before. The developers are keen to point out that these are real performed legatos, reproducing the natural changes of timbre and bow pressure you’d hear in a real-life performance, with no crossfade ‘fudging’ or other trickery involved. Inevitably, there will be increasing amounts of delay with the slower transitions as the ‘players’ prepare for the next note, so some forwards time-shifting is necessary to ensure notes fall correctly on the beat, especially when quantising parts. The PDF manual suggests approximately 100ms for fast, 250ms for medium, and 333ms for slow. Similarly, portamento slides need to begin well before the beat. Having a choice of three transition speeds really does make a huge difference to how smoothly and naturally notes connect with each other, depending on musical context and the speed of the part; it’s well worth spending time experimenting with this for the best results.

This composite screen shows the velocity meters for Standard legato (two speed zones) and Advanced legato (three speed zones). When legato is off (polyphonic), the meters are replaced by an interactive envelope graphic with adjustable attack and release times.

Each section has faders for three mixable mic perspectives: Close, Main and Room, together with a ready-made Mix of all three positions. Patches load with the Mix fader active by default; switching on any of the individual mics de-activates the Mix and unloads its samples, avoiding unwanted sample duplication or unnecessary RAM usage. Each mic fader can be routed to a separate Kontakt output if desired, so you can process them individually.

The pre-made Mix sounds great out of the box, so you may well opt for just using that! There is also an in-built hall-style reverb, but the developers are so confident about the natural sampled acoustic of the Trackdown Scoring Stage that they suggest you won’t need the reverb. And you know what? They’re right. Finally, I haven’t yet mentioned the Con Sordino switch lurking in the corner of every patch in the library. This is a convolution-based emulation of the classic silky, muted sound, typical of intimate passages accompanying scenes of romance, sadness, pastoral bliss or Philomena Cunk’s profoundest Moments Of Wonder.

CSS has all the essential elements needed to produce expansive, expressive string arrangements with a distinctive Hollywood flavour. The refreshingly uncluttered GUI and simple operation applies across the whole library — once you’ve learned how one preset works, you’ve learned them all.

A lot of thought has clearly gone into making CSS as versatile and easy to use as possible. CSS is decidedly geared towards melody and harmony. If you’re after spooky evolving clusters, swoops, sinister mutterings or other aleatoric effects, you’ll have to look elsewhere. Likewise, there are no pre-sampled performances of sforzandi, crescendi, decrescendi, swells or other such dynamic manoeuverings that may or may not fit your music in quite the way you’d hoped. However, that omission shouldn’t be a deal-breaker, and personally I think it’s a good thing, since all those effects are not only eminently possible with CSS, but they’re under your direct control — and you can sculpt and shape them to be exactly how you want. If Cinematic Samples can maintain this standard across the rest of the Studio series, they should earn themselves an enthusiastic and loyal following.

CSS is an extremely expressive library, oozing quality with a Hollywood flavour. It has all the essential elements for creating detailed, realistic-sounding string arrangements, and is very quick to learn and easy to use.