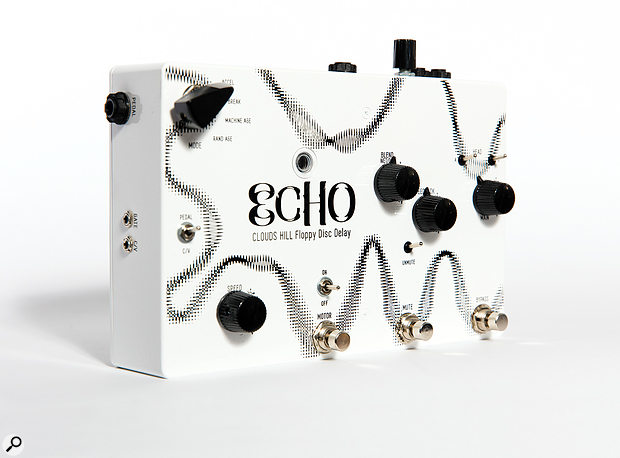 Can a technology borrowed from digital computers bring anything new to the world of analogue delay?

This quirky unit brings back to life a classic vintage effect but in a very unusual form: the Echo employs a 3.5-inch floppy-disk cartridge — a technology we usually associate with early digital computing — as the magnetic medium on which the analogue delay line is stored.

Johann Scheerer, founder and owner of Clouds Hill Recording in Hamburg (Studio File SOS April 2016: http://sosm.ag/studiofile-cloudshill) is an analogue aficionado by any standard, and the vast collection of classic gear there includes what is quite possibly the largest collection of vintage tape delays in the world; the stack of Watkins Copicat units in Studio 1 alone is almost six feet high! It’s this passion that led Scheerer, in collaboration with Nicolas Baginsky, luthier and electronics engineer of NB Instrument, to bring to life the Echo Floppy Disc Delay. At the time of writing this is, to the best of my knowledge, the only commercially available unit of this kind.

Hand-built in Germany, in small quantities, the Echo is both a sonic plaything and a collectible item which carryies a substantial price tag. However, Clouds Hill FX say they’ll be able to ramp up production in the second half of 2016, which should bring the price down to a more comfortable figure.

The Echo’s circuitry is housed in a fairly bulky pedal, which is no surprise given that the enclosure has to accommodate the whole mechanical floppy drive assembly. On the plus side, the 22cm-wide front panel offers ample space for the controls — which is just as well, since the Echo boasts plenty of them! The basic delay controls include potentiometers for main output, wet/dry blend, feedback and delay time. Employing two different playback heads, each of which can be activated individually, the Echo offers delay times from 0.06 up to 1.6 seconds. This is a fairly broad range, and the maximum value is impressive for a unit of this type. This, in turn, though, means that the delay time pot has to cover a really wide range; at times, this can make fine-tuning a bit of a challenge. In addition, there are three stomp switches: ‘Motor’ activates the motor of the floppy drive assembly; ‘Mute’ requires no further explanation; and the ‘Bypass’ switch enacts a hard-wire bypass that takes the unit out of the signal path entirely. Two little toggle switches reverse the polarity of the Motor and Mute switches, which increases creative options, especially when using the delay and playing an instrument simultaneously. One might argue that placing the tiny toggle switches so close to the stomp switches makes the unit more fragile than it needed to be. Indeed, I see a bit of a mechanical Achilles’ Heel here, but then I don’t imagine the Echo will find a home on many rock & roll stages anyway — its nature makes it, to me, more of a studio effect. Nonetheless, do be aware that reasonable care should be taken if exposing the Echo to the rigours of touring and stage shows. 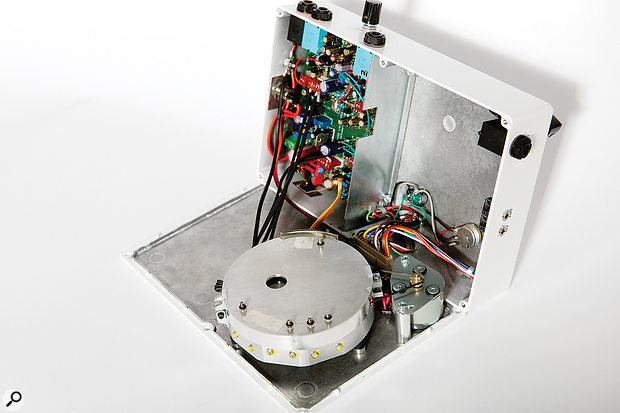 The electro-mechanical floppy drive unit is clearly visible inside the enclosure.

Speaking of studio effects, the delay speed may be adjusted not only using the respective potentiometer, but also by way of an external expression pedal or even CV/gate signals — the Echo can be toggled between the two modes. When applying control voltages, the gate signal switches the motor on and off. There’s also a selector switch offering various functions for the external controls. ‘Accel’ and ‘Break’ reverse the polarity of the expression pedal — whether the delay accelerates or slows down when the pedal is depressed. The two positions ‘Machine Age’ and ‘Rand Age’ introduce errors to the motor circuitry gradually. Digitally stabilised, these functions make the unit even more versatile. In ‘Machine Age’ mode, a good amount of wow, flutter and even howling can be added, essentially transforming the Echo from a well-maintained delay to a seemingly almost broken unit. ‘Rand Age’, in contrast, brings all kinds of random errors into play.

The rear of the unit offers connectors for Input, Output and Dry Output. When a plug is inserted into the last of these, the dry signal is removed from the main output. This way, the direct and echo signals can be sent to individual amplifiers for a stereo effect. A gain pot offers control over the input level. In addition, the unit has a connector for the expression pedals and mini jacks for the CV/gate inputs. It receives its juice via an external 15V DC power supply. Lastly, there’s visual control over the delay effect by way of a ‘magic eye’, whose LEDs in various colours indicate echo speed, control mode and error frequency.

From today’s perspective, analogue delays are character effects, and the Clouds Hill FX Echo should be viewed as such. The basic parameters should be familiar to most of us, but it is fun to explore the more special controls of the unit. The Echo offers plenty of options for adapting it to a wide range of possible-use cases, and it does so not only by way of features like the input gain trim, but also through its pedal and CV/gate connector. Especially the last of these opens up a large field for experiments in a modular synth setup. But that said, if you’re ‘only’ planning to use the Echo with an electric guitar, the unit excels here too, as the interface and controls already boast versatile options far beyond what’s normally possible with a delay. The wide parameter ranges help as well — the maximum delay time of up to 1.6 seconds exceeds the normal range of analogue delay pedals, which further adds to the versatile nature of the unit. However, as I alluded to earlier, a single potentiometer has to cover the whole range from ultra-short slapbacks to stop-motion effects of the floppy drive assembly. Thus, a little turn on the pot can go a long way, and it is a bit difficult at times to adjust the delay to exact note values.

But this little issue aside, the Clouds Hill FX Echo plays an interesting riff on the analogue delay theme. It’s more compact than a tape delay, but it offers more options than a simple bucket-brigade delay with a comparable footprint. The Floppy has a distinct character which is mainly defined by its physical attributes. The motor runs much more stably than a tape transport, and that’s why imperfections have been deliberately designed into its control circuitry by way of the ‘Rand Age’ and ‘Machine Age’ options. Magnetic real estate isn’t exactly abundant on a 3.5-inch floppy disk’s surface, and this fact largely defines the sound of the delay. For example, the frequency response of a classic Roland RE-201 Tape Echo can be considered ‘high fidelity’ in comparison with the Clouds Hill device. In addition, the sound of the latter breaks up much faster and more abruptly, with a shorter transition between ‘clean’ and heavily distorted signals. This shouldn’t be viewed as criticism per se; I am simply describing the inevitable quirks of the technology employed in the delay line of the unit, so that you’re ready to deal with these points — as you must be when using any kind of analogue or even electromagnetic delays. 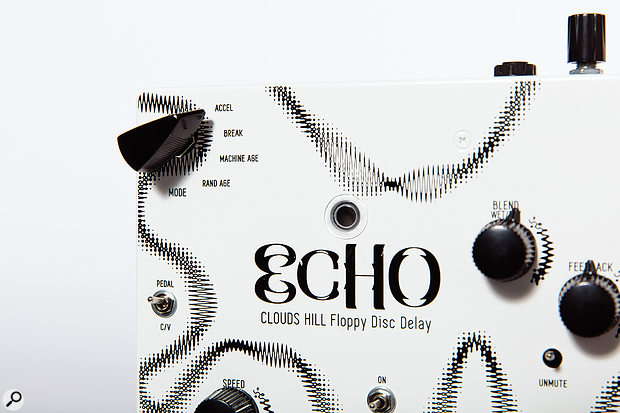 In essence, the Clouds Hill device can do many different things, from simple rock & roll slapbacks on vocals, drums and guitars, to swirling feedback clouds on synths or any other signals, and the wide range of delay times offers plenty of leeway for situations in which the unit can even be used as an instrument on its own. Stop-motion effects and, with a bit of practice, little feedback melodies can be achieved; the unit offers a distinct sound palette that’s fun to explore and offers up plenty of creative ideas. Longer feedback tails sound remarkably different to other analogue magnetic tape or bucket-brigade designs. The general noise levels are more than acceptable, but note that as an electromagnetic device it has to be placed carefully; it’s not immune to hum pickup. In my review situations, putting it on the mixing desk hasn’t been an issue at all, but placing the device too close to the right-hand (PSU) side of a Minimoog yielded unacceptable interferences.

Anyone accepting these inevitable quirks will find a truly unique sound toy here, one that’s no mere gimmick and which offers far more than just a proof of concept. Yes, an electromagnetic delay can be designed based on a floppy cartridge, yes, it even sounds good, and yes, Clouds Hill FX did a terrific job delivering this technology in this feature-laden form!

The unit is aimed at specialists, hand-built by a luthier in Germany in small quantities, and boasts a unique technical layout. These factors in combination are responsible for the rather hefty price tag. But if this unit is for you, you will know it, and then the price is a different issue. Future production runs will, as I say, allow for a slightly lower retail price, but these first units will be collectable items for sure!

One could argue that electro-mechanical delay units are a thing of the past. There are only very few of these in current production, like the Fulltone Tube Tape Echo or the T‑Rex Replicator, and both carry hefty price tags. There is the vintage market, with units such as the Roland Space Echo RE-201, Binson Echorec and numerous others, but this would mean a substantial investment, too, not mentioning the potential maintenance issues. However, a plethora of pedals like the Electro Harmonix Deluxe Memory Man or Strymon El Capistan emulate the sound of electro-mechanical delay with characterful results — and they are much easier to obtain!

The Clouds Hill Echo feels right at home with signals from a classic analogue synth like the Minimoog. Stop motion / varispeed effects like in example 5 can be used with great impact in arrangement transitions.

This example shows a rhythmic groove delay on a basic bass drum and snare groove. The two reproduction heads deliver different delay times, and they can be engaged individually or simultaneously.

With hard-panned dry and wet signals the Clouds Hill Echo becomes a great device to create a stereo image out of a mono signal. Longer feedbacks almost sound like a guitar amplifier feedback — how the second harmonic takes over is absolutely beautiful.

We’ve placed a number of audio examples demonstrating the Clouds Hill FX Echo in action in the sidebar of this article.

As an analogue electro-mechanical device the Echo Floppy Disc Delay comes with all the quirks of such a technique. It delivers many classic and a few more unusual sounds with great quality. Conceived as a device for specialists, enthusiasts will love the character of this unique effects unit.