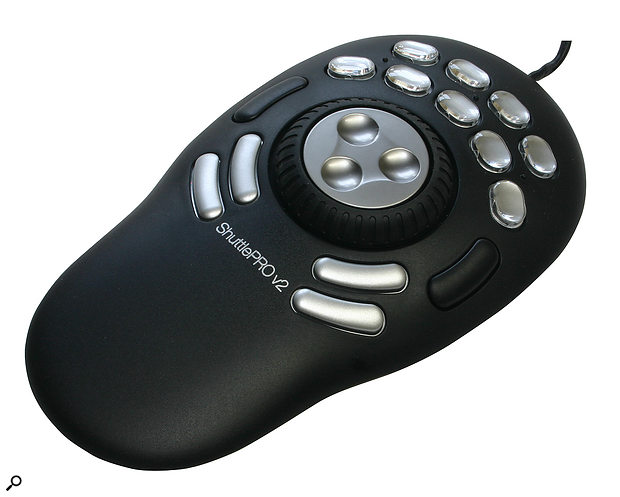 Some people are happy to drive their DAWs and video editors entirely from a keyboard and mouse, while others are only satisfied when their hardware controller stretches from wall to wall in front of several screens. For those who fall somewhere in-between, the Contour Designs Shuttle Pro v2 might appeal.

Connecting via USB and operating via the appropriate Mac or Windows driver downloaded from the Contour Designs web site, this little controller is centred around a pair of concentric wheels, the middle one a detented rotary encoder and the outer one sprung with around ±90 degrees of travel. Above it are nine buttons with a further long black button to either side. Bellow are four more long buttons, this time finished in silver.

A setup page in the software allows the user to type in the desired key commands corresponding to the various buttons, though a default set is provided if you’re happy to use it. The list of supported applications on the Mac includes Pro Tools, Logic Pro, Cubase, GarageBand, Final Cut Pro, Sony Vegas, Photoshop, iMovie, Mail, Text Edit, Quicktime and many more. Buttons or wheels can also be programmed to send out a single key command or a stream of repeated key commands at a choice of different rates, which is how jog/shuttle functions are set up. All you need to do is click on the modifier key icons, then enter the letter, number or symbol corresponding to the key command set up in your DAW or other application, and the job is done. You don’t even have to save anything, as whatever you change is remembered.

The clever part is that you can set up custom key assignments for each of the applications and these will automatically follow when you switch between them. If you’re going to use the Shuttle Pro v2 mainly with a specific piece of software, such as Logic Pro, the top nine buttons have removable clear caps, and Contour Designs thoughtfully include a sheet of peel-off labels that can be fitted under them. These include all the usual transport key icons, 44 other common functions and over 70 blank labels for you to customise.

Tested with Mac OS 10.11.3, I found setting up the buttons to be very straightforward, so the real question you have to ask yourself is, ‘Will it improve my workflow?’ I like the wheels for moving around the timeline, having dedicated transport keys, and using the remaining buttons for functions such as Save, Undo, Markers, Mute, Solo, display Zoom and so on, though it’s really down to you to choose. Because the number of buttons is limited at just 15, it’s unlikely that you’ll be able to do all of your work without also using the keyboard, but it could make accessing those features and functions you use the most just that little bit smoother. You might, for instance, save lots of time by assigning various modifier-key combinations to the buttons, so that while one hand covers the keyboard, the other doesn’t need to leave the Shuttle Pro. It’s a simple idea, well executed and also very affordable, so it’s well worth checking out.