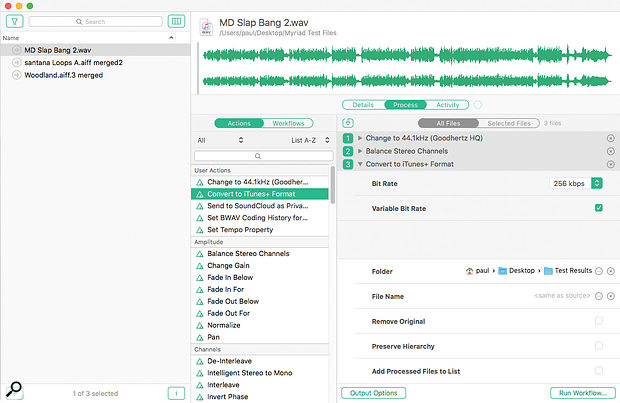 Formerly known as Sample Manager, Myriad from Audiofile Engineering is a fully featured batch converter for audio files, providing a useful toolkit both for sample library creation and for broader applications in just about every corner of the audio world. It includes a comprehensive library of processes or ‘Actions’ that can be imposed on multiple files, as well as the ability to customise and save your own edited Actions. Enhancements in the latest version 4 include speed and stability improvements, as well as an expanded feature set. Output formats supported include AIFF, WAV, Broadcast WAV, ACID, CAF (including PCM, ALAC and AAC encoding), Ogg Vorbis, VOX, Apple Loops, µLaw, Apple Lossless and FLAC, while on the input side, pretty much any common audio file format is recognised including MP3 and other compressed formats.

Go With The Flow

Myriad has a streamlined look that, thankfully, doesn’t follow the current trend for making everything black or dark grey! The GUI is airy and uncluttered, and is composed of two windows: the Main window, and a Waveform window that can be opened or closed from the Window menu or using a key command. This latter window is used to define areas to be trimmed, snipped, or played back for auditioning. If beat extraction is being applied, the detected beats are also shown on the waveform display. The Main window shows the Files List, a smaller Waveform Overview and the Workspace. Files to be processed are simply dragged into the left-hand section of the window, where they are automatically analysed by Myriad in readiness for processing.

The operating procedure is to drag in the files you wish to process, then to arrange various Actions to create a ‘Workflow’. The Workflow is then run, and new processed files generated. In the main, this is all drag-and-drop simple. Actions that can be performed are listed by function, so that you see anything relating to gain (such as normalising, fades, gain change) in one menu section, file attributes in another, and so on. A view filter allows you to look only at the Actions you are interested in, and all processes apart from compression can be previewed before you commit. For musical samples, the MIDI base note can automatically be detected and added to sample attributes, and files can be trimmed in length and have fades applied. Beat extraction is another of the useful sample-processing options available.

The Workspace, to the right of the main screen, has three view options selected using the Details, Process or Activity buttons; another button flips between All Files and Selected Files. The currently selected audio file is shown in the small waveform window at the top right, and file info for any selected file can be shown by clicking the ‘i’ button at the bottom right of the Files area. Selecting Details shows a comprehensive list of file attributes that includes positive and negative peak values, RMS level, Average level, Form Factor, Crest Factor, number of clipping events, separate Mid and Sides peak values and Program Loudness in LUFs.

In Process view, Actions are added to the Workflow list either by double-clicking or dragging them to the right-hand panel, where they can be reordered as required. The Actions List shows all the Myriad standard Actions plus any custom User Actions, which include the option to process via a selected Audio Units plug-in — if, for instance, you need a compressor that can be adjusted in greater detail than the built-in one, or one that has gain-reduction metering, the best option is to use a third-party AU plug-in and to incorporate that in your Workflow.

There are over 100 Actions in the standard library, most of which have user-adjustable parameters; adjusted versions of the standard Actions can be saved as User Actions by dragging the renamed, modified version back into the Actions List. Each Action displays a green circle with an ‘i’ inside it: clicking this displays more details on what each Action does. Actions you use on a regular basis can be marked as favourites, and it is also possible to back up your Workflows using the Export Workflow menu command. 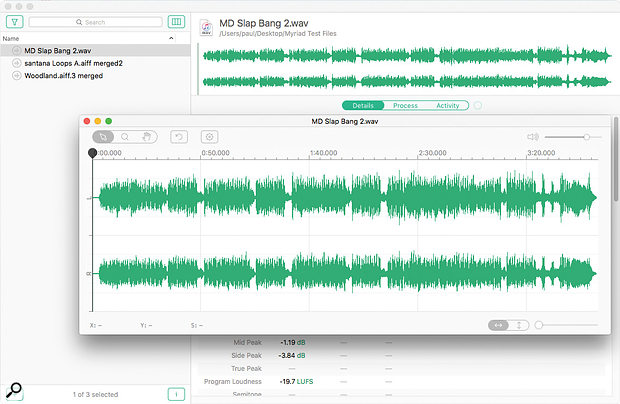 The Waveform window comes into its own when a detailed focus on the audio is needed.

File names and attributes can be changed, and there’s the option to keep the original files or to have the processed versions replace them. There’s also the option to set up a new destination folder for your files if the default doesn’t suit you. Processing includes the respected Goodhertz Good Dither and sample-rate conversion algorithms, and there’s AppleScript support. Myriad supports Constant, Average and Variable MP3 bit-rate options and can be set to apply the same Action to all files or individual Actions to specific files. There’s also support for Broadcast WAV metadata. If you simply want to sample-rate-convert a batch of files or de-interleave stereo interleaved files, Myriad will do it for you, and it will happily convert the file format at the same time. Additional Actions can include sending files to iTunes, DropBox and SoundCloud.

Once you’ve set up a Workflow, you just need to click the Run Workflow button and let Myriad get on with the job. In my tests I set up a new folder to receive the processed files and opted to keep the originals intact. As each file is processed, information may be displayed in Activity views including (hopefully) a ‘no errors’ message, but if a corrupted file is encountered it will be skipped and logged rather than holding up the whole process.

The sheer number of Actions that can be performed on a file makes Myriad a very powerful piece of software, but the designers have done a commendable job of making its operation really simple. Not only that, but the results are first-rate too. It is worth checking out Audiofile’s web site to discover the full list of Actions, as there are too many to list within a review. Myriad really does do just what it says on the packet, and will be an asset to just about any Mac user working with audio files. In fact, the only small thing about it is the price!

Perhaps the most obvious Mac alternative is Audio Ease’s established Barbabatch, though this is considerably more expensive than Myriad.

Despite its modest cost, Myriad is a very useful tool that can save huge amounts of time when you need to process multiple files.