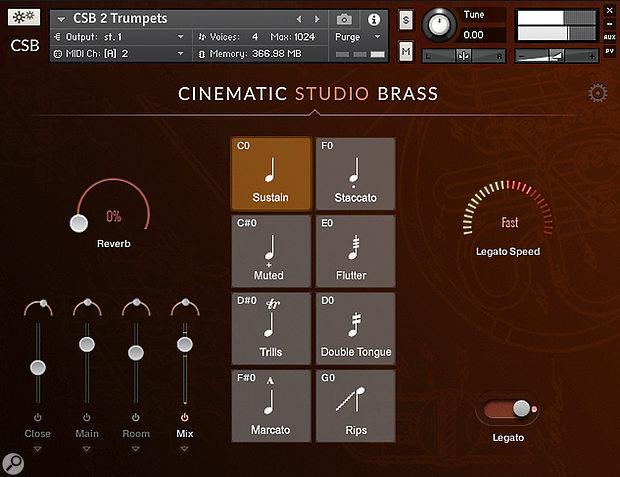 The Cinematic Studio Series interface is elegant in its simplicity, and very easy to learn.

Is this the only library you need for Hollywood-style orchestral brass?

To quote the Star Trek: Enterprise theme song: "It's been a long road, gettin' from there to here..." Two years after its intent was announced, Cinematic Studio Brass (CSB) joins the Cinematic Studio Series of instruments. In keeping with their existing ensemble strings, solo strings and piano libraries (CSS, CSSS and CSP), Alex Wallbank and his team recorded this collection at the Trackdown Scoring Stage in Sydney. With its unashamedly Hollywood-style agenda, can CSB hold its own in an already crowded, cinematically flavoured market? Let's find out.

CSB offers nine NKI patches, comprising five solo instruments (Trumpet, Horn, Trombone, Bass Trombone and Tuba), three section patches (2 Trumpets, 2 Trombones, 4 Horns) and a Full Ensemble patch — always useful for working up basic parts, pads and big tutti blasts. The same easy, no-nonsense GUI used by Cinematic Studio Strings and Cinematic Studio Solo Strings makes its reappearance, with eight keyswitchable articulation slots, some of which contain sub-articulations and options selected by mod wheel or key velocity (see the 'Articulations' box). Wherever appropriate, the articulations' slots and their keyswitches match those of CSS and CSSS. Some articulations from those string libraries (tremolando, harmonics and pizzicato) have no equivalents in CSB, so instead those slots contain other techniques appropriate to brass, namely Mutes, Flutters and Rips. Up to a point, you could theoretically copy a CSS Viola part, for example, onto a CSB Horn track and they would behave identically in unison, as long as none of those 'incompatible' articulations are involved.

The eight solo and section patches are provided with Close, Main and Room mics, plus a stereo Mix of all three mics, which loads by default. The stereo Mix provides a good, all-purpose balance, showing off the rich and sonorous character of the Trackdown Scoring Stage. The individual mics offer good depth of perspective, from astringently in-your-face to a wide, warm back-of-the-room feel. The Main mic sounds great on its own, with a well-balanced timbre and lovely ambience that sits well in a mix. The Full Ensemble preset differs in having individual mics for each instrument section, allowing their relative levels to be adjusted.

CSB strikes a healthy balance between quality of sound, ease of use, playability and a good selection of the most essential articulations.

Capturing a sense of the huge dynamic range of real-life brass is a challenge for any virtual instrument, and here CSB acquits itself admirably. The Sustain and Short articulations offer four dynamic layers; the upper fff layer (particularly of the trumpets and trombones) yields a wonderfully searing top end that can't fail to cut through the densest of mixes. If I were to be hyper-picky, the mod wheel crossfade points between dynamic layers sometimes appear to be a little sudden, though that's a necessity with the solo instruments to avoid unwelcome phasing artifacts during volume/timbre transitions. The mod wheel dynamics also go down to zero, which I like very much. Not all libraries do this, and it's good not to have to wrestle with an additional MIDI controller when you want to fade sounds to silence. The 'down to zero' benefit has one disadvantage, though: since the dynamics of the long articulations for all mics are controlled by the mod wheel, pulling the mod wheel down to zero too quickly whilst notes are still playing results in the sudden, unnatural disappearance of that ambience. To alleviate that problem, some additional reverb will help to mask over an otherwise dry-sounding note ending. This is not an issue for the short articulations, whose dynamics are controlled by key velocity. Every CSB patch has its own adjustable reverb, which might be a convolution impulse derived from Trackdown Studio, but as the edit tool on CSB is locked out, we can't look under the hood to confirm this. 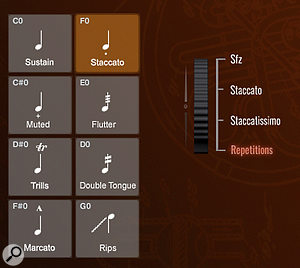 When the Staccato keyswitch is active, the right side of the GUI shows the short note variations selectable either by moving the mod wheel or by keyswitch velocity.As with CSS and CSSS, there are four lengths of Staccato articulation: Repetitions, Staccatissimo, Staccato and Sfz, initially selectable by the velocity at which you hit the F0 keyswitch, and subsequently via CC1. If you have difficulty playing fast repetitions (the shortest of the four options) CSB offers an alternative helping hand with the Double Tongue articulation. This offers not only double-tonguing, but anything up to nine tempo-sync'able repetitions (the number is controlled by CC1) plus a continuous 'hold' value that keeps going until you release the keys; the final note of a repetition group is accented with a staccato sample. The lowest number (1, denoted by an 'x') is rather redundant, as it's already present amongst the Staccato articulations. It also cuts dead with no ambient tail, so is best avoided. I'd have preferred the number of repetitions to start with '2', and be set by keyswitch velocity; the 'CC1 only' method currently entails frantic surgical editing to place the correct CC1 value microseconds before or after the keyswitch, which can be tricky in a continuous, busy passage that requires frequent changes of articulation. 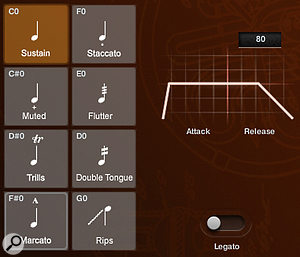 When Legato is off for polyphonic playing, all long articulations present this Attack/Release envelope control.Elsewhere, the Sustain articulations' legato has been fine-tuned for each instrument, with transitions sampled for each dynamic layer, and two (velocity–dependent) legato speeds on offer. The results are very naturalistic, even including a subtle swell before each new triggered legato note. Legato transition times realistically reflect the speed at which instruments change note; the trombone and tuba transition times, for example, are longer than the more agile trumpet.

The most versatile of the articulations is Marcato, a combination of CC1-controlled sustain and optional velocity controlled Repetition overlay. It's well-suited to aggressive, swashbuckling melody lines, with the ability to jump between short and long articulations according to playing style and mod-wheel position, and ideal for creating precisely sculpted, gutsy sforzandi and swells. Like all the long articulations, the legato can be disabled for polyphonic playing. 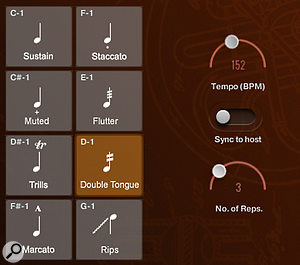 Double-tonguing speed can either be set manually to a specific tempo, or sync'ed to the host DAW. The number of repetitions is controlled by CC1.Mutes are provided in short and long variations, with one legato speed for the longs. I could do with a bit more volume on the Mutes compared with other articulations, especially for the Horns. However, you could always load separate instances of CSB dedicated to Mutes, with the patch volumes pumped up to circumvent that problem. Flutter tonguing covers three dynamic layers, and slobberingly effective it is too, being especially alarming when applied to the Full Ensemble preset. Major 2nd and minor 2nd Trills are easily accessed simply by playing the two relevant neighbouring notes — no other intervention required. Rips vary in type depending on the instrument; all trumpets and horns generally run upwards by an octave or thereabouts, solo trombone and bass trombone slide up by a tone, whilst tuba covers roughly a fourth. The one exception to the 'upward rip' is the 2 Trombones patch, where the notes of the lowest octave slide downwards by one tone.

The obvious benefit of having multiple libraries of any one type is the luxury of choice, enabling you to pick the one best suited to a particular musical context. However, not everyone has the funds (or perhaps even the disk space) for that luxury, so the task of choosing just one brass library that will hopefully fill your needs can be daunting, given the multitude available. CSB strikes a healthy balance between quality of sound, ease of use, playability and a good selection of the most essential articulations. It's designed to integrate well with the existing CS Strings libraries, and if you're already familiar with those, CSB requires virtually no learning curve. It can be strident and subtle, equally at home delivering full-power ensembles and expressive, flowing solo melody lines. It faces stiff competition from Spitfire's recent Studio Brass, but established fans of CSSS and CSS will welcome an already familiar way of working, and importantly, will not be disappointed with the quality of sound and playability of CSB.

Spitfire Studio Brass Pro covers similar ground, with some additional instruments and a few more playing techniques. There's also an affordable 'standard' version with fewer instruments and articulations, and only one stereo mic position. Cinesamples CineBrass and NI Symphony Series Brass both offer solo and section instruments and a range of articulations. Samplemodeling make extremely realistic brass virtual instruments, but at a high price if you need all the same instruments that are featured in CSB. Performance Samples Caspian, though simple in execution, can be very effective.

This fine, Hollywood-style brass library is blissfully easy to use, sounds excellent, has a very wide dynamic range, provides the most important, commonly used articulations and covers both ensemble and solo instruments.