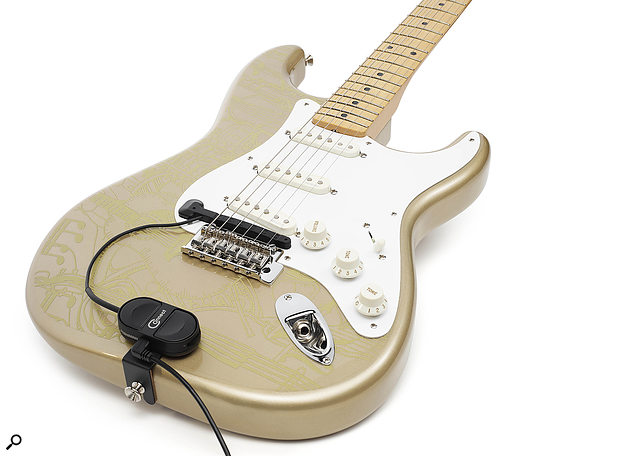 Fishman's wireless TriplePlay guitar-to-MIDI system has a strong reputation for fast and accurate tracking, and the company now offer these benefits in their TriplePlay Connect for iOS. This system combines a hex pickup and mounting kit with the TriplePlay Connect App (for iOS 9.3 or later), and the latter is used both for setup and for sound generation. An included USB-to-Lightning cable connects the pickup to the iPad and also powers the pickup, which comes with a variety of spacers so it can be fixed to the guitar without modifying the instrument or leaving screw holes; a simple slide-lock allows the pickup to be separated from the spacer when not in use. It is vital to install the pickup as close to the bridge as possible and to use the spacers and adjustments to get the pole pieces as close as possible to 1mm from the strings. (The pickup fits most guitars, including steel-strung acoustic models, though not Telecasters with traditional 'ash tray' bridge plates.) You can then download the app, which requires around 2.5GB of free memory, and start playing.

Many of the factory patches include a split to put bass sounds on the bottom two strings, but you can set up your own splits and layers by string and fret position.

The app introduces itself with a guitar tuner and a page for balancing the string sensitivities. You're then taken to the main page, where you can select from a library of instrument types and sounds and explore the factory presets. While the sounds that come bundled with the app are fairly conventional with very limited editing available, they're of generally good quality and are arranged by instrument type, including drums, bass, keyboards, wind and so on. There are even guitars, both electric and acoustic. There are also numerous ready-made musical loops, plus the ability to record and store your own — the idea is that you can trigger these from specific notes on the guitar and then play along with them. The preset examples use the low strings above the 12th fret for starting and stopping loops, so you're unlikely to stray there by accident. Further clips can be bought as an 'in-app' purchase, but so far you can't add new sounds this way (something for the future?). 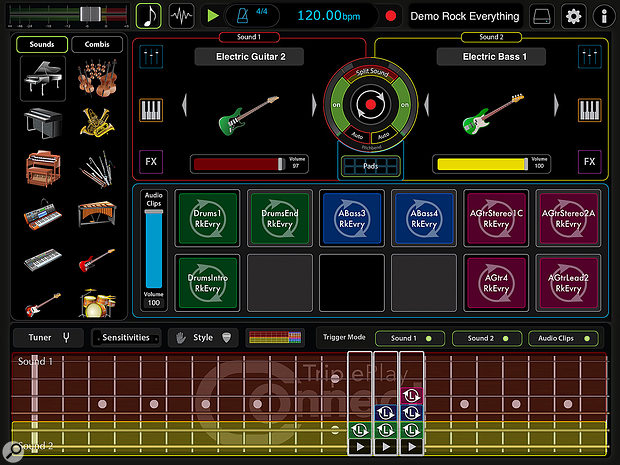 Many of the factory patches include a split to put bass sounds on the bottom two strings, but you can set up your own splits and layers by string and fret position, all shown on the fingerboard display running across the bottom of the window. You can also set up arpeggiators or program chords to be played from single notes. There's a lot to explore, including a range of onboard effects, but a series of video guides makes the process fairly painless.

Using a USB cable, also included, you can plug the pickup directly into a computer running a DAW and the pickup will show up as another MIDI input. There's no adjustment when working this way and with the current version, all the data runs on a single MIDI channel, which limits pitch-bends to single-note lines, but I found that it worked very reliably when teamed with Logic Pro X and is ideal for laying down pads or basic melodies. Having said that, Jam Origin's MIDI Guitar software also does a good job in this context, is cheaper and doesn't require a hex pickup. I mentioned this to Fishman and they revealed that a multi-channel update would be available very soon, which should make the USB controller option far more appealing, as it would allow for string-independent pitch-bending, note splits and so on, all with the speed and accuracy for which Fishman are renowned.

As with earlier TriplePlay systems, the tracking latency really is minimal, making everything feel very immediate and if you play cleanly you shouldn't find yourself triggering rogue notes. The app is a lot of fun and puts in a very solid performance — and if you prefer to work only in your usual DAW, then the standard TriplePlay system may be more flexible, and costs only around 50-percent more.