If you are wondering when Freshtone's Lost Tapes Vol 2 was reviewed in Sound On Sound, take a look at the July 2014 issue. This follow-up library certainly took a long time to appear, but it continues where its predecessor left off, by providing soul and psychedelic-influenced funk loops that sound like they could have been sampled from records cut in the late '60s or early '70s. 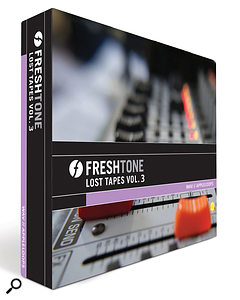 Once again, the sample content was recorded at East London's Gizzard Studios, using the facility's Alice Stancoil mixer, ribbon mics, Studer tape recorders and vintage instrument collection. In fact there are so many similarities between the two volumes that I wouldn't be surprised to learn that this one was recorded at the same time as its predecessor and has been kept on ice until Volume 2 sales started to fade.

In all there are over five gigabytes of samples, but it would be more accurate to say that the library is 2.7GBs, because each recording appears in Acidized WAV and Apple Loops formats.

The first folder contains 89 full band instrumental recordings, mostly lasting about 15 seconds. These ensemble pieces include drums, percussion, bass, guitars, electric pianos and brass sections, so they are a bit full-on to use as the basis of custom compositions, but they do demonstrate how the rest of the collection's samples fit together. There's also a folder called Cutdown Jams, which includes all the sections apart from the brass.

The remaining nine folders contain the loops of the specific instruments, so if, for example, you like the guitars in the arrangement called '119bpm MADISON full jam 1.WAV', its six guitar parts can be found in the Guitar Loops folder, all starting with the name '119bpm MADISON'. If, on the other hand, it is the Rhodes lick that you have a use for, the Keys Loops folder is the place to look.

Although the solo instrument loops generally have plenty of atmospheric amp hum and harmonic distortion, they don't exhibit any spill from the other instruments, which tends to suggest that they weren't recorded by a band grooving together in the same space.

Overall, though, the performances are excellent and the arrangements are spot on. It's all there, from busy drums, to restless basses and biting brass stabs. The producers must have spent most of their lives either watching '70s American TV cop shows or trawling through countless old vinyl collections. It would have been great to have some arrangements that feature strings for that even bigger orchestral sound, but considering the collection's very reasonable retail price, that's probably asking too much.

My only real criticism is that sometimes the timing seems slightly too tight, possibly as a result of the recording and editing processes used to get clean and tempo-accurate samples, but that's a small price to pay to avoid the sort of copyright infringement issues that come with vinyl record sampling.