Lost Tapes Vol 1 is the first release from UK-based Freshtone Samples. The library's title derives from the efforts to catch the authentic sound and vibe of the 1960s and 1970s era with the use of instruments and recording technology from that period: classic guitars, amps, keyboards, drum kits and mics, all captured to one-inch tape. The material is provided in both Acidised WAV and REX formats. 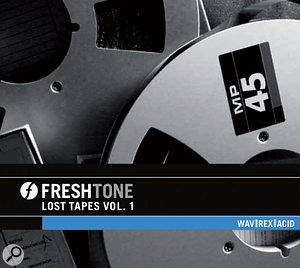 The content is organised into instrument-based folders. These include the inevitable drums, percussion, guitar, bass and keys, but additional folders are provided that contain drum fills, stabs, 'tweaked' versions of the drum loops (in many cases, the drum loops layered with some percussion), 'crackle' loops (yep, needle on vinyl sounds, and very nice too, even if there are only 10 loops!), a 'miscellaneous' catch-all odds-and-sods folder and, finally, two 'jams' folders.

These last two contain full and cut-down jams respectively, and while the overall folder structure doesn't immediately suggest a construction-kit-based library, the jams — each of which contains a musical section based upon a pre-mixed selection of the loops — indicate otherwise. In fact, when you dig into the various folders, the file names allow you to identify which loops easily slot together. So, for example, the three guitar loops with 'Dropper' in the title can be combined with three similarly named bass loops, half a dozen drum loops and nine keyboard loops. This construction-kit basis should not, of course, stop you trying to mix and match the loops in other ways.

Organisation aside, are the sounds on the Lost Tapes worth finding? Absolutely, and as a first release this is an excellent start for Freshtone. The sounds are right on the money (though dominated, to my ears, at least, by the '60s vibe rather than the '70s one) and truly authentic of the era, including some great funk and pop/rock guitar, excellent drum loops and spot-on Hammond organ. Many of the loops are liberally doused in reverb and other effects that are characteristic of the period. If, for example, you want a dash of swinging '60s London, this is a very good place to start.

Given that the library includes the pre-mixed 'jam' loops (useful though these are as demonstrations of what can be done), there perhaps isn't quite as much content as the headline numbers might suggest. That said, the asking price is well towards the lower end of the loop-library range and, given the authenticity of the material, Lost Tapes represents excellent value for money. As this is Vol 1, I'm assuming Vol 2 will follow. If so, I hope it's as good as this. John Walden