Graph Tech show us that MIDI pickups and guitar synthesis needn't be solely the preserve of the electric guitarist. 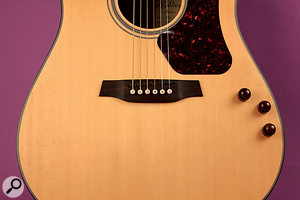 The GK pickup's output socket can be fitted to the side of the guitar.

Despite being primarily an acoustic guitarist, I've had a long-term, love/hate affair with guitar synthesizers. As the 1970s came to a close, I bought a Roland G300 synth and its dedicated, Ibanez-built, G303 guitar controller. The Roland was followed by an ARP Avatar, essentially a keyboard-less Odyssey fitted with a hexaphonic pitch-to-voltage converter.

After those two had been passed on, and the '80s icons — the Roland GR700 and the Synthax — had disappeared in the rear-view mirror, I acquired a Zeta Mirror 6 MIDI Guitar Controller. The Zeta was perfect until its strings and frets got ever so slightly dirty, after which point its tracking and triggering went loopy — so I sold it in despair and gave up on guitar synths. However, technology marches on and I now have a new Roland GR55 guitar synthesizer, and by timely coincidence, the opportunity to review the Graph Tech Ghost Acoustic MIDI System arrived just as I was considering how the GR55 might best be controlled from an acoustic guitar.

Although known best for their innovative line of guitar accessories, Graph Tech are no strangers to interfacing electric guitars to pitch-to-MIDI converter systems such as the GR55. Their new Acoustic MIDI System is a derivative of their existing Ghost modular pickup system for electric guitar. The review sample arrived pre-installed into a modestly priced Chinese-made dreadnought, a situation that is somewhat akin to fitting Rolls Royce steering to a Mini. However, given the amount of woodwork involved in the fitting, this approach may be a better option than carving up a more expensive guitar!

The Ghost Acoustic MIDI System consists of two electronic modules that install inside your acoustic guitar — the Roland GK-compatible Hexpander Interface, and the Tone Control acoustic preamp, with three-band, swept-mid EQ. Both are driven by the hexaphonic pickup, which replaces the existing bridge saddle of your nylon or steel-strung acoustic guitar. The system is completed by a switched output jack, 9V (PP3) battery clip and holder, and a no-solder cabling harness.

The Tone Control is an acoustic preamp that's designed to deliver an accurate acoustic sound from the Graph Tech hexaphonic piezo pickup. Three dual concentric potentiometers control the Tone Control's three-band EQ and the levels of the system's acoustic and MIDI outputs. Two of these are mounted on the board itself, while the pot that controls the sweep mid-range is on a flying lead, allowing you some flexibility in the control layout. The review guitar was fitted with the optional rosewood stacked knobs (£24.95), which really looked the part. The only other available option for the board, the MIDI Program Up/Down switch, was not fitted (not that I missed it).

The Tone Control is powered by the battery and connects to a standard quarter-inch jack that carries its acoustic output. The input from the hexaphonic piezo pickup comes via the Hexpander board, and for that reason the Tone Control is not intended for stand-alone use.

The Hexpander MIDI Interface carries a Roland GK-compatible 13-pin output that can drive not only the latest pitch-to-MIDI converter systems, such as Roland's GR55 and VG99, and the Keith McMillen StringPort, but also the earlier GK-compatible units from Roland and other manufacturers. Essentially a preamp designed to interface the output of the hexaphonic piezo pickup to a pitch-to-MIDI converter, the Hexpander features a proprietary harmonic damping system, said to yield fast, accurate tracking unequalled by any other system on the market today. The Hexpander gets its power down the GK cable, from whatever unit it is driving. The circuit board is attached to the mounting plate for the 13-pin connector, which also carries Graph Tech's Traktion switch. This selects between the Hexpander's two tracking curves to help optimise its response for your guitar, playing style, and MIDI converter. The presets are intended for use with Roland and Axon MIDI converters, but with other brands you should find that one of these will do the job.

The hexaphonic piezo pickup that drives the Ghost Acoustic MIDI system is dimensioned to replace a standard 1/8 inch (3.175mm) bridge saddle. The six piezo elements are mechanically isolated from each other by voids in the pickup, which gives it something of the appearance of a wide-toothed comb. There are two variants available, one designed for steel-strung guitars and the other for nylon-strung guitars. To accommodate the radiused fingerboards commonly found on steel-strung guitars, Graph Tech have developed the stepped 'Pagoda' shim which, when fitted in the bridge slot, gives the pickup a radius of 18 inches (457.2mm). 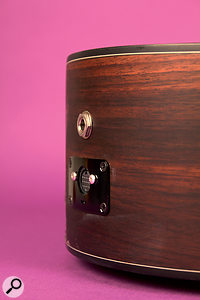 The only giveaway sign of the Graph Tech system is the presence of three knobs for the preamp EQ. The optional rosewood ones are pictured.

Fortunately for me the Ghost Acoustic MIDI System was supplied already fitted, as reading the system's detailed installation manual makes it pretty obvious that installation is not for the faint-hearted or unskilled.

Firstly, there's the requirement to internally reinforce the side of your acoustic guitar before creating a significant rectangular hole to accept the Hexpander and its control plate, plus a separate hole for the switched quarter-inch jack that carries the acoustic output. The second stage involves drilling holes in the front of your guitar to accept the Tone Control's volume and tone pots. In doing this you have to work round braces and struts whilst maintaining a pleasing symmetry on the front of your guitar.

The final stage of the fitting of the hexaphonic pickup in the saddle slot is the drilling of six holes in the bottom of the slot for the individual output cables, sanding the pickup to a snug fit and, if necessary, routing out the bottom of the bridge slot.

All of this is a fair amount of non-reversible structural alteration that would mean that you would probably want to dedicate a guitar specifically to the system. One nice touch is that there is no soldering involved, with all connectors being pre-made and simply plugging into position.

Taken in isolation as an acoustic pickup/preamplifier combination, the Ghost Acoustic System performed impeccably in the supplied guitar. Played (with the tone controls set flat) through a stereo pair of 100W, full-range, two way acoustic guitar-specific powered monitors, the result was pretty close to the unamplified sound of the guitar. Particularly notable was the impressively high degree of string-to-string separation. Admittedly, the supplied guitar didn't have a particularly complex sound, and I'd like to hear the system in a higher-quality guitar before passing final judgement, but what I heard was impressive.

The system's performance as the driver of a pitch-to-MIDI converter is inextricably linked to the capabilities and performance of the converter to which it is connected. Roland's latest creation, the GR55, has a comprehensive set of parameters designed to optimise its interaction with the source driving it. Of these, the most important are the individual string sensitivities. Setting those up revealed that the output of a single plucked string is approximately double that of its neighbours. This is no doubt due in part to the construction of the pickup, and would explain the sense of separation perceived while testing the acoustic pickup. 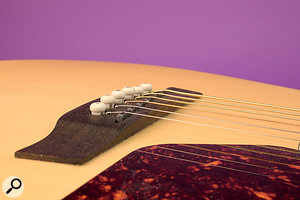 Another aspect of string separation surfaced as I was using the GR55's onboard guitar tuner to tune the guitar. When tuning the sixth (low E) string I noted that the only other indicator activated by the note was that of its neighbour, the fifth string, the rest remaining untriggered. This might indicate that the 'harmonic damping system' has band-pass filters as part of its makeup. This strategy was used in the quintaphonic pickup/preamplifier of the (now unavailable) Zeta Jazz violin and contributed in no small part to that instrument's high level of performance.

In my view, the core challenges facing any would-be guitar synthesist are finding the string sensitivities required to fully exploit the features of your pitch-to-MIDI converter without inducing false triggering, and the development of a good single and multi-string damping technique. When setting the string sensitivities, lower was definitely better, and I finally settled on values in the low 30s (a fact that won't mean anything to a non-GR55 owner!). The qualities that make the Graph Tech hexaphonic piezo pickup such a good reproducer of the sound of an acoustic guitar — high sensitivity, accuracy and wide dynamic range — need taming to accurately drive the GR55's pitch-to-MIDI conversion. Once I'd set the string sensitivities satisfactorily, the Ghost system turned in a virtually faultless performance as the drive source of the GR55, providing that I kept my playing reasonably clean and damped unwanted strings.

A final thing to note is that because acoustic feedback will also drive the pitch-to-MIDI converter, my gut feeling is that a shallow-bodied acoustic guitar fitted with a soundhole 'feedback buster' might be a better platform for this system in a stage situation.

Apart from the name, which is a trifle misleading (the system itself does not output MIDI messages), there's little to fault in the performance of a properly set up Ghost Acoustic MIDI System, and the high degree of string separation has a lot to do with this.

The system itself is not excessively expensive, but once you add in the cost of fitting and the price of a reasonably good-sounding, low-cost guitar, you've easily doubled your initial outlay. As it's a new product, there are few retailers in the UK at the moment, and distributors Aria recommend using Oasis Music (www.oasismusic.co.uk), who stock and can fit the Ghost system.

The way of guitar synthesis is not for every acoustic guitarist. However, if you are attracted to that path, the Graph Tech Ghost Acoustic MIDI System is one of the best means of travelling down it.

The only directly comparable units are offered by the RMC Pickup Company. Their Acoustic Gold bridge saddles and the Polydrive IV on-board active electronics are found on, for example, the Godin Multiac series. However, RMC's web site (www.rmcpickup.com) gives only two installers here in the UK and prices are not inexpensive: I was quoted in the region of £400-500 for a system including fitting. The Shadow SH075 MIDI System (www.shadow-electronics.com) is an external solution, but again expensive with a retail price in Germany of €590. The other alternative is a Roland GK3 pickup run alongside an existing on-board active pickup system. One advantage here is that the temporary mounting of the external version of the GK3 does no damage to your guitar, and there's an internal version (the GK-KIT-GT3) should you wish to make the arrangement permanent and less visible.