The original VOGAD compressors may not have been developed with music in mind, but listening to this one you wouldn't know that! 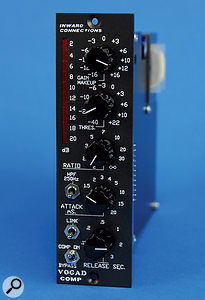 We've looked at a couple of processors by LA-based Inward Connections, most recently their TSL3 tube limiter. The Vogad VCA compressor is one of the first few products they've released for the API 500-series Lunchbox racks, the others being the Brute opto compressor and the Magnum mic preamp. The acronym VOGAD stands for 'voice-operated gain-adjusting device', which I understand is an old military and telephony term coined to describe a fast type of compressor used to reduce overmodulation.

The front panel hosts knobs to control the key parameters (make-up gain, threshold, ratio and attack and release), a 10-segment LED gain-reduction meter marked in two-decibel increments down to 20dB, and three small metal toggle switches. The topmost switch engages or bypasses a 250Hz side-chain high-pass filter, the middle one provides a stereo link facility for those lucky enough to own a pair of Vogads, and the last switches the compressor in or out via a relay. The gain makeup is marked ±16dB, the threshold -40 to +22 dB, and the ratio 2:1 to infinity:1. The attack legend runs from 0.2 to 20ms, and the release from 0.1 to 3 seconds. There are no detents on any of the controls, so you'll need to set them by eye/ear for recall. Everything's clearly marked, though on the whole the front panel felt a little crowded, which meant I had to strain to see which knob controlled which function until I became more familiar with this device.

The large ratio range is the first thing to remark on here. The figures suggest that the Vogad may not be capable of the very-low-ratio, low-threshold sort of setting you might want for some subtle mastering and bus-processing jobs, but it should be capable of just about everything else, right up to hard limiting. The fast attack time setting suggests that the Vogad might be useful on transient-rich percussive sounds.

The next thing that caught my eye was the Link toggle switch. This enables you to link the detector circuits — including the threshold and time-constants — so that you can use a pair of Vogads for stereo work. This is a welcome feature: as you'll know if you read my review of the Safe Sound Stereo Toolbox, back in SOS October 2011, I've often had to resort to using dual-mono processors in an M/S configuration, because in my experience it's the only reliable means of linking them such that the stereo image doesn't suffer — unless, of course, you have a proper link facility such as this! There's nothing wrong with M/S, but it's so much nicer to have a proper L/R option. The interesting thing about the stereo link feature here is that all the controls of the master unit control those of the other. Most link systems gang only some of the controls, but still leave you to juggle the make-up gain controls of both channels to achieve the right balance. There's none of that faffing required here.

The input and output are both balanced, but only the output employs a transformer (made by CineMag). For those who are interested in the tech specs, the input impedance is stated as 20kΩ, and the output as 600Ω balanced; the frequency response is quoted as ±0.2dB from 10Hz to 100kHz; the output signal-to-noise ratio is -95dB or greater; THD+Noise is given as 0.01% at 1kHz (+4dBu); and the distortion as 0.01% THD, +4dBu at 1kHz. 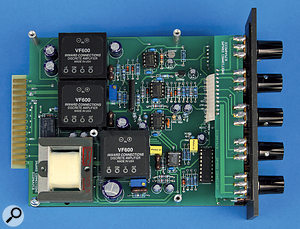 Three of Inward Connections' own VF600 discrete amplifiers are used in the Vogad.

So, down to the nitty gritty. How do the Vogads sound, and on what material do they work best? I tested the Vogads on a range of test material that I use whenever auditioning new gear, ranging from male and female vocals, through acoustic piano, acoustic guitar, clean and distorted electric guitar, bass and drums.

Dialling in gentle, transparent compression was effortless on vocals, with no unwanted grit or other audible artifacts. The signal path sounds incredibly clean, in fact. It was a similar story on guitar parts. So, for those bread-and-butter, clean gain-reduction jobs, the Vogad seems a good choice. But it is on drums and percussion where the Vogad comes into its own, courtesy of that fast attack time, which enables you to emphasise or iron out the click of a kick or the crack of a snare with ease. In fact, I found that it was possible to set the attack much faster than I could imagine ever really needing to use.

The same characteristics make this device excellent on the drum bus. Whether I was seeking to glue things together gently or really make the kit smack, the desired effect was always within reach. The release time is also flexible enough to take you into obvious pumping territory — perhaps not as much as some compressors, but plenty enough to make a kit bounce.

Switching in and out the side-chain high-pass filter was well worth it. On bass guitar, this made it easy to control the part without the compressor being driven by the powerful low frequencies, and it was a revelation when working on drum loops or on the bus. It's a feature that I see appearing on more and more new processors, and I always find it useful. I really don't know why everyone doesn't add side-chain filtering these days. The only criticism I have here is that I'd like the option to be able to set the filter slightly lower, at around 90 or 100 Hz. But you can't have it all, I suppose.

Funky Junk supplied a pair of Vogads for review, so I tested them against a few other compressors on the mix bus, and was happy enough with the results. I personally am usually looking for something with a little more 'character' in that role, but for some people I suspect they'll be just the ticket. Whatever your personal tastes, they're certainly versatile enough to be used as master compressors on a range of different material. They also performed well when put to work as limiters.

The Vogads are clean-sounding, fast and incredibly versatile, particularly given the stereo link feature and the infinite ratio. It's almost hard to believe that you could cram this much flexibility into two Lunchbox rack units. The only real down sides — the crowded legending and the lack of detents for recall — don't affect the sound of the Vogads at all. Judged on sonic quality and usefulness alone, I really can't fault them.

Thanks to KMR Audio for the use of an API Lunchbox rack unit during the course of this review.

The world isn't exactly short of compressors, and even in the more limited world of the API Lunchbox format there's plenty of choice. VCA compressors are available from the manufacturers as diverse as Radial and Shadow Hills. None sound quite like the Vogads to me, but which you like most is very much down to your own ears!

The Vogads are lovely, versatile and genuinely useful compressors. The link feature is particularly welcome, as it makes a pair of Vogads a candidate for bus-compression duties. While not cheap, they represent good value for money, and I have no qualms in recommending them to anyone.