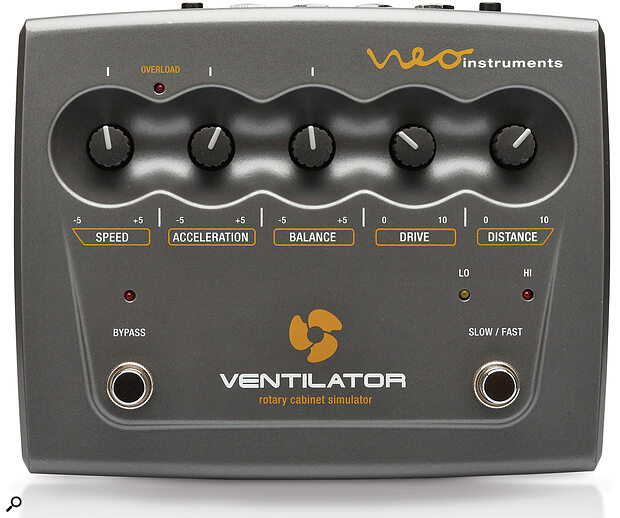 There have been plenty of Leslie emulators over the years, but is the Ventilator the one that finally nails 'that' sound?

I'm a fully signed-up member of the Electromechanical Keyboard Instruments Die-hard Fan Club. If it hasn't got spinning, whirring parts, or if something doesn't hit, pluck or pull something else when you play a key, then I'm not interested. I've gigged a fully fledged Hammond C3 with a Leslie 145 for years. Some people say I'm nuts and should get a lightweight digital clone, but those don't cut the mustard for me — and they always break when I pound them! The same goes for the Leslie. There is something that is just magical about feeling the wind coming off a Leslie speaker in full flight, right next to your head. So I paid vague attention to the buzz on the Internet regarding the new Ventilator. But after hearing several impressive demos it was with a little more interest that I un-boxed one, my Leslie staring over at me with curiosity but confidence.

The Spin On Things

The Ventilator was developed by Access Virus creator Guido Kirsch, who has been very helpful in answering the few questions regarding the unit I've fired his way. He developed the Ventilator after searching long and hard for a decent Leslie simulator, but being disappointed by one or more aspects of all of them. The combination of a treble rotor spinning in one direction and a bass rotor in the other with the creamy and lush sound you get from that glorious amp, the many combinations of amplitude and frequency modulation going on, the warm sound of the stock speakers, and the unique tone of the wooden cabinet itself, mean that emulating a real Leslie is a challenging task. The stock Leslie 122 the Ventilator is modelled on has two standard speeds, slow (or chorale) and fast (or tremolo) and none of the Leslie simulators I have ever encountered, either those built into a clone, stand-alone devices, or those modelled in computer software, quite get that tremolo sounding like it should. After playing through the real deal for over 20 years, your ears get quite attuned to that sound, and if it's fake you can usually spot it a mile off.

The Ventilator's back panel features a socket for the unit's 12V power supply, a high and low input level selector switch, quarter-inch audio input and stereo outputs, a socket for the optional footswitch and the interestingly named 'Key/Git' switch, which is in fact a bypass for the internal amp and speaker simulator.

The first thing I noticed on getting the Ventilator out of the box is its construction. This is a solid unit, the main bulk of which is fashioned out of a substantial piece of aluminium. It is built with guitarists as well as organists in mind, and would certainly stand up to the firmest of size 10s stomping away on it. All the main controls are recessed into the unit, and the footswitches are of extremely sturdy construction. I was a little disappointed to see an external power supply, but I can understand the reasons for this, and the included PSU is well built. Next to the power-supply socket there is a single mono input, a pair of stereo outputs on quarter-inch unbalanced jacks, and a further jack for a remote input to control speed switching.

On the top panel are the two footswitches, one for hard bypass and the other to switch between fast and slow rotor speeds. The first of the five recessed controls on the top adjusts the overall speed of the virtual motors, then, moving from left to right, we have controls for acceleration, balance, drive and distance. The acceleration control adjusts the time it takes for the virtual rotors to speed up and slow down when you hit the speed switch; balance adjusts the balance between the top and bottom virtual rotors; drive controls the amount of tube-style overdrive; and distance adjusts the relative distance between the virtual mics and the virtual speaker cabinet. Again the designer has paid close attention to detail here in precisely measuring the outputs of the Leslie 122 speaker, and setting all these controls to the 12 o'clock position closely mimics the characteristics of the original speaker.

One thing I instantly missed was a 'stop' button for the virtual rotors. On breaking with tradition and reading the manual I discovered that this is possible, but not without using an external switch. Half-moon-type switches from both Hammond and Nord plug straight in and work perfectly, and Neo Instruments also make the Ventilator Remote, an optional footswitch that adds a variety of functions to the basic slow and fast of the main unit. This is built to the same high standard and, using dip switches inside the unit, can be set to control the unit in up to eight different configurations: slow, fast, run and stop in both momentary and latching modes. A five-foot TRS cable is included, and the Remote should give a minimum of three years' operation on two AA batteries.

On plugging the Ventilator into a line out on my Hammond C3, I was transported into a sea of vintage loveliness. It sounded full, warm, clear, woody, and really did seem to take on the character of a vintage Leslie cabinet. The overdrive is one aspect of many Leslie simulations that always seem to let them down, but I have to say, the warmth and growl of this little unit is among the best I've ever heard. It certainly surpasses many 'real' tube overdrive circuits which, although containing a real tube, run off too low a voltage to offer anything other than visual appeal. The overdrive is adjustable from none at all to full-on grunge, with various levels of meaty, throaty growl in between.

In a direct comparison between the Ventilator and my own Leslie 145, I was impressed with what I heard, the Ventilator delivering pretty much all of the character of a vintage Leslie cabinet. When I really cranked it up and pulled all the drawbars out, the real Leslie came into its own and just had more pure raw power, that indefinable 'something' you get with a lot of classic vintage gear, and the ability put a smile on my face and make the hairs on the back of my neck stand up. In contrast, the Ventilator seemed a little more utilitarian in its sound, but I have to say that the effect is certainly as close as anything else I've ever heard, and is considerably better than many lesser wannabe Leslie models I've owned.

When using the Ventilator with guitar, one word sprang to mind: lush. There's something about plugging a guitar into a Leslie simulator that really reveals the quality of the actual wooden cabinet simulation, and this is spot on. It sounds like you're playing a guitar through a vintage Leslie. It just does.

The next big challenge for the Ventilator was in a live situation. I had a gig with a full band lined up at a fairly small venue and wanted to put the Ventilator through its paces with the organ, both as accompaniment as well as on the occasional tune where it was pushed right out front. All my bandmates commented after the gig on how impressive the sound was. With a little reverb added into the mix, it really did sound as though I had a vintage rotating speaker on stage, and our sound engineer was delighted to have three fewer microphones to worry about!

So, to sum up, this is one occasion where the product really does live up to the hype. The Ventilator runs on as much processing power as some entire tonewheel organ clones, and that level of power, and the attention to detail of the designer, make this quite simply the best Leslie speaker simulator to date. Would I record with one? Well, I'll stick to my Leslie for up-front Hammond stuff, but for situations where the organ takes more of a back seat and the recording environment may be less than ideal then yes, absolutely. And for live work, the only area in which the Ventilator falls down for me is in the stage presence and theatre of the real thing, but that, surely, is one of the reasons for its existence. That stage presence and theatre comes at a price — the effort of getting the thing to a gig, the hassle of miking it up and trying to get it loud enough in a live situation, and the ever-present worry that the smoke engulfing you on stage is not coming from the smoke machine, but from your 50-year-old amp!

For those gigs where the Hammond is out front, and the stage is big enough, I often have my trusty Leslie to the side of me, spinning and whirring away, exciting both myself and the audience, producing that wonderful wind on my neck when I ramp up that tremolo. But nowadays that Leslie is quite often just my stage monitor, the Ventilator sitting quietly on top, producing all the sound that the audience is hearing directly through the PA. And you'd be surprised at just how many people come up to me after the gig and say "Wow! Leslie sounds amazing tonight!” But shhhhh... don't tell anyone!

The Boss RT20 (reviewed in SOS August 2006) is probably the best currently available alternative. Primarily intended for guitarists, it features more controls for a more tweakable sound, but doesn't quite nail it sonically in the way the Ventilator does. The BBE Soul Vibe is a cheaper alternative, with simple speed and intensity controls, but doesn't come close to the Ventilator in authenticity.

Other options are available in software, one of the best sounding I've heard is that built into the VB3 tonewheel organ from Genuine Soundware (www.genuinesoundware.com). The simulators built into Native Instruments B4 and Logic's own EVB3 also sound great if you don't need them to be too up-front in a mix.

If you want to simulate the sound of a vintage Leslie speaker, then it doesn't get any better than this!