Focal's CMS range of active monitors has been expanded with the compact CMS40s and the sizeable CMS Sub. Do they work well as a team? 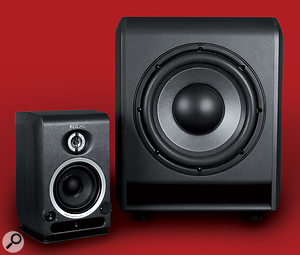 Focal, founded at the beginning of 1980 in Saint Etienne, France, have built a fine reputation for studio monitors in recent years, with a line of active monitors combining unique concepts with proprietary technologies. The latest addition to their line is the diminutive CMS40 active nearfield monitor, which arrived for review along with the active CMS Sub, designed to partner both it and the others in the CMS range — the CMS50 and CMS65.

One of Focal's trademarks is their inverted-dome tweeter, which is designed to optimise the mechanical coupling between its voice coil and the dome itself. Since the voice coil is mounted centrally, the inverted dome radiates across its entire surface, making it extremely efficient and significantly extending its frequency response. Focal also state that its frequency response is more linear than any non-inverted dome, that it has wide dispersion, and that it offers unequalled dynamics — all of which should translate to a precise soundstage, making it easier to position elements and to assess low-level detail such as reverb tails and the artifacts of compression.

Another Focal exclusive is the Polyglass loudspeaker cone, which combines light weight with extreme rigidity. The Polyglass process consists of applying a layer of molten-glass 'microballs' to a paper cone. This melds the damping quality of the paper with the rigidity of glass, giving a cone that has a linear response curve and a greatly increased definition in its mid-range. 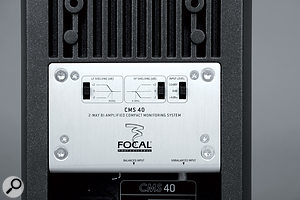 The CMS40's rear panel, with HF and LF shelving controls, and an input sensitivity switch.

Even though it is the most compact monitor in the Focal Professional range, the diminutive CMS40 weighs in at a robust 5.5kg. The magnetically shielded and low-resonance, cast-aluminium enclosure is finished in black, giving it an attractive air of purposeful elegance. The front of the enclosure carries the inverted-dome tweeter and a four-inch Polyglass woofer that drives into a slot-shaped, front-facing reflex port.

The tweeter sits inside an elliptical waveguide and is made of an aluminium/magnesium alloy that combines the rigidity of the former with the damping qualities of the latter, to give an extremely quick impulse response with excellent damping. These qualities not only extend the tweeter's frequency response above 28kHz (its -3dB point), but also match the characteristics of the CMS40's Polyglass woofer. The drivers sit behind a pair of metal grilles that Focal recommend you remove (using a supplied tool) for optimal performance. The phase plug incorporated in the treble grille should then be replaced by the provided plastic equivalent.

The transducers are driven by an internal pair of 25W Class-A/B power amplifiers, producing a peak SPL of 97dB. Front-panel controls are simply an on/off switch with an associated LED, and a slightly recessed rotary volume control, with a nearby LED to indicate the onset of clipping. The rear panel carries the input sensitivity switch (+4dBu, 0dB, -10dBV) and the high-shelving (4.5kHz) and low-shelving (450Hz) switches, both of which can be set to -2dB, 0dB or +2dB. These enable you to tailor the output of the CMS40 to the acoustic environment in which you are working.

In addition to the aforementioned grilles, grille-removal tool and phase plug, the CMS40 comes with its own rubber table stand to keep it secure and decoupled. The cabinet bottom carries a central mic-stand thread and four threaded holes (blanked off by rubber feet) that not only allow you to secure the CMS40 to a stand or mount, but also enable you to angle it using the two supplied round-headed, adjustable spikes. These, together with two rear fixing points, allow the attachment of a range of K&M and Omnimount mountings. 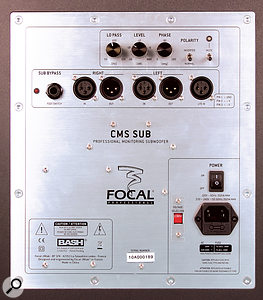 The CMS Sub is highly adjustable, which should make integrating it into a monitoring system easy.

With its 11-inch, high-excursion Polyglass driver, a 300W BASH-technology power amplifier capable of producing 113dB SPL, and a weight of 23kg, the CMS Sub is a different beast entirely. BASH (Bridged Amplifier Switching Hybrid) is a patented Class-H amplifier technology that uses a fast-response, pulse-width modulated power supply to produce a smaller, more efficient amplifier than conventional Class-A/B designs, so I'd hate to think what the CMS Sub would weigh without it!

The 22mm MDF cabinet is finished in a fetching dark-grey vinyl. A front-facing slot underneath the speaker betrays the presence of a bass-reflex port and, again, removal of the speaker grille is recommended to ensure the highest fidelity. The rear panel has everything you'd expect to find on a professional sub: XLR connectors for the left, right and LFE (Low Frequency Effects) inputs and the left/right paralleled outputs; rotary controls for phase adjustment (0-180 degrees), level (-24 to +24 dB), and low-pass frequency (50 to 150 Hz); and polarity and mute switching. A jack socket to allow the connection of an external mute switch is also provided. The ability to access all the above parameters should make integrating the CMS Sub in your studio a simple and accurate process.

Focal recommend running in new loudspeakers for 20 hours with bass-heavy programme material, so I did just that. To remove as much as possible from the audio chain, I drove the CMS setup directly from the variable-level outputs of a high-quality TEAC CD player.

During the running-in period, I left the grilles in place but removed them (and fitted the tweeter phase plugs) as soon as I started really listening. The difference, incidentally, was quite dramatic and there is no way that I would consider refitting the grilles for anything other than transit protection. The CMS range is optimised for distances between 40cm and 3m, and I started with the CMS40s on their own at a distance of 2m. Setting the pair up in my listening room at that distance was simplicity itself: HF shelving at 0dB and LF shelving at +2dB produced a well-balanced sound across the frequency spectrum.

Listening critically to mixes and commercial CDs that I know well proved the validity of Focal's claims for the CMS40: accurate, articulate bass with good extension, a detailed mid-range and a clear top end that revealed a very high level of detail. The imaging of the stereo soundfield had a size and solidity that was extremely impressive, and the scale of the CMS40s' sound belied their small size.

Moving them closer together at about 50cm only required changing the LF shelving back to 0dB to maintain balance and clarity. In order to position the tweeters at my ear level, I tried mounting the speakers on a pair of hefty K&M shockmounted table mic-stands, which worked extremely well.

The CMS Sub was equally impressive. Although its fast, articulate response worked well alongside the CMS40s, the imbalance in output SPL between the two meant that it took me a fair bit of time to achieve a satisfactory balance. It required a bit of experimentation to find the best setup, and I was more than grateful for the Sub's comprehensive control complement. The most useful control on the Sub turned out to be the phase adjustment, and it was this that eventually got me there.

Although I knew Focal's high-end hi-fi products from my time in that industry, this was my first encounter with their professional monitors. I've come away from the experience extremely impressed, not only by the clarity, detail and scale of sound that the CMS40s deliver so effortlessly, but also by the air of solidity in their sound. Despite their size, they are more than capable of giving many larger monitors a run for their money, which is a real achievement, and one that completely validates Focal's engineering approach. Competition at their price point is intense and there are many viable alternatives to the CMS40 to consider if you are in the market for a pair of really good nearfield monitors but, for me, the CMS40's detail and the almost tangible soundfield will be hard to beat.

The CMS Sub is excellent. Its speed, timing and articulation allow it to handle any genre of music, and I couldn't fault its performance. The range of adjustment that can be made to its output is key to its successful integration, and I have absolutely no hesitation in recommending it for your serious consideration.

I found myself slightly less convinced by the CMS40 and CMS Sub as a system. Although integration was very good at low to moderate monitoring levels, I felt that at higher levels the CMS Sub was always close to overwhelming the CMS40s. With that in mind, I would recommend auditioning the CMS Sub together with a pair of the larger CMS variants, as I suspect that that would turn out to be pretty spectacular.

There are several comparable alternatives to the CMS40s in the same price range that are also worthy of your consideration. I'd suggest that you take a look at the KRK VXT4, the Genelec 8020BPM and the Adam Artist 3 in particular. The Acoustic Energy ProSat and ProSub comprise a similarly priced 2.1 monitoring system to that reviewed, while Blue Sky also offer a range of similar setups.

The CMS40 is the smallest active monitor in the Focal Professional range, and it delivers a sound that belies its diminutive dimensions. The scale and level of detail of its soundfield make it worthy of serious consideration for your nearfield monitoring needs. The CMS Sub delivers a fast, articulate sound that never fails to impress, and the range of adjustment available to aid its integration into a monitoring system should serve to ensure its success.