The SR40V has an impressive pedigree and high-end sound — but do they justify the price tag?

When I saw the price of this new live vocal mic, I was quite surprised, to say the least. To be fair, there are many studio mics that cost a lot more, but most of us are just not used to seeing live mics in this price range. In fact, you can buy a respectable small PA system for less than the cost of this microphone! Still, Earthworks usually come up with pretty special products, so I was intrigued.

Based in New Hampshire in the US, Earthworks make a point of communicating the fact that their microphones are built in the USA rather than offshore. They already have a strong reputation in the recording field — mainly for their small-diaphragm instrument mics — and they appear to have adopted the same rigorous engineering ethos for this premium live vocal microphone.

The SR40V is a back-electret capacitor model, and thus requires phantom power. Its capsule is built around a five-micron-thick diaphragm, which is similar to that of a typical studio mic, and its designers claim that it has the fastest transient response of any live vocal microphone available.

The SR40V's polar pattern follows the usual hypercardioid shape for a stage mic, with a small lobe of sensitivity at the rear, but it still provides a good measure of rejection of sounds coming directly from behind. Sensitivity at the rear of the mic is around 15dB down from the measurement at the front, while around 30 degrees off the rear axis it is closer to 30dB down. This means that you should endeavour to aim your stage monitors around 30 degrees from the rear. Off-axis performance is almost perfectly even across the entire audio range, especially over the forward hemisphere of the mic. Overall frequency response is rated from 80Hz right up to 40kHz, within 3dB. 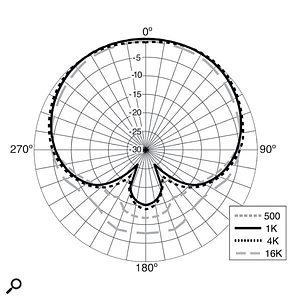 The SRV40 exhibits an extremely even off-axis response, especially over the forward hemisphere of the mic. Note that the sweet spot for monitors is around 30 degrees behind.As stage vocal mics are designed to be used close to the mouth and all cardioid mics exhibit a proximity bass lift, this mic has been designed so that the response is flat when the mic is used around six inches (15cm) from the source. Many vocal mics have a flattering presence peak built in, but the benefit of a flat response such as this is that you can use EQ to add any necessary presence humps exactly where the singer needs them, rather than starting from somebody else's idea of what will work.

At distances of a metre or more, the lows start to roll off below 200Hz and are around 3dB down at 100Hz. The unusually high upper reach of the frequency response has prompted Earthworks to call the SR40V 'the world's first High Definition condenser vocal microphone', although you would need an extremely good-quality sound system to take advantage of this extension. Of course, there's absolutely no reason not to also use the SR40V in the studio too, as its performance is right up there with many good studio mics.

According to the literature, the designers have tried to make the frequency and time response of this microphone as faithful to the input sound as possible, rather than trying to impose any kind of character. The capsule and transformerless circuitry have been designed for optimal transient response and accuracy in the time domain. This is desirable, as it helps to avoid the phasing or smearing of harmonics that often occurs with cardioid-pattern microphones, especially as a result of compromises in the acoustic labyrinth that couples the rear of the diaphragm. Apparently, the circuitry in each mic is hand-adjusted to match each capsule for consistent performance, while the capsule suspension is designed specifically for low handling noise.

While the self-noise figure of 22dB SPL (A-weighted) would be nothing special in a studio mic, it's actually very quiet for a live microphone that's designed to be used close to the sound source. The sensitivity rating of 10 mV/Pa (-40 dBV/Pa) is lower than your average studio condenser, and reflects the needs of a stage microphone, as does its peak SPL handling of 145dB.

As you'd expect from Earthworks, even the casing for the microphone is a little special: the body is made from stainless steel rather than the usual turned brass or cast alloy. The mesh grill, which also incorporates a foam lining, is finished in the same tough type of black powder coating as the body, and feels nice.

With most live mics, you can unscrew the basket for cleaning, but the SRV40's basket seems to be solidly fixed. Presumably, this is to protect the capsule from clumsy hands, as the manual confirms that the microphone is not designed to be disassembled by the user. There are no mute, pad or low-cut switches on the body at all, so it's a very well-sealed unit. 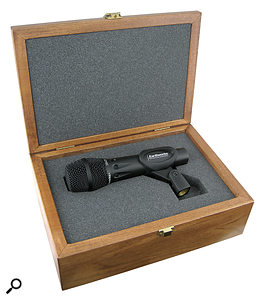 The included wooden box is very attractive and provides plenty of protection, but isn't ideal for live use.A good-quality mic clip is supplied with the microphone, and it all comes packed in a foam-lined wooden case, of the type more commonly included with studio mics. This isn't the most practical thing for carting the mic between gigs, but it looks classy, as you can see in the photo.

The manual states that this mic can be 'hot-plugged' without any problems, which means that it can be plugged into a cable with phantom power already applied. If you do choose to do this, though, be sure to mute the relevant mixer channel to avoid loud pops. Best performance is achieved after leaving the mic to settle for one minute or more after switching on the phantom power.

For me, the ideal live vocal mic would have great feedback rejection and low handling noise, and would be resistant to popping. It would also sound like a serious studio mic but still exhibit great vocal projection. In other words, it would provide the best of both the studio and live worlds.

My live test for this mic involved using it with my Fohhn line-array PA system, which I chose because it's compact yet delivers close to hi-fi quality sound. There was a small but noticeable improvement in clarity over my usual vocal mics (which include both dynamic and back-electret models). The resistance to feedback was much better than I'm used to when using the Fohhn system, especially in the particular venue in question. I heard no popping at all, and the handling noise seemed adequately low, although the mic was used stand-mounted for the actual performance. Used in anger, then, the mic ticked all my 'ideal vocal mic' boxes.

Back in the studio, I made some speech recordings and found the quality to be equal to that of my other studio capacitor mics. All of the mics sounded slightly different of course, but the SR40V came over with a good balance of highs and lows, sounding very natural and transparent. I'd certainly have no qualms using it for a studio session, and because the mic doesn't have specific character engineered in, it should suit a wide range of vocal styles and voice types.

The exceptional transient response of the mic is even more evident when heard over good studio monitors than over a PA system. In truth, you'd need to be performing through a particularly good PA system in order to get the best out of this microphone. I don't know of many systems that get close to an upper reach of 40kHz, but the transient response is a bonus in live situations.

Earthworks have definitely created a benchmark live vocal mic in the SRV40, one that's capable of delivering studio-quality sound, albeit at a studio price. It is a lot of money to spend on a live mic, but if sonic accuracy and feedback resistance are high on your list it's worth considering, and doubly so if you can also make use of it in the studio.

This is as close to a technically perfect live vocal mic as you're likely to get, plus it's solidly built and backed by the Earthworks 15-year warranty. If you do decide to invest in one, you'll have a first-rate mic that will probably last you a lifetime.

The Earthworks SR40V is one of the most expensive hand-held live vocal mics available, but competing premium models that are worth checking out include the Sennheiser E865S, the Neumann KMS105, Shure's KSM9 and Beyerdynamic's TG V96c and TGX 930 models.

Whenever you want the best of something, you have to be prepared to pay for it, and the SR40V is expensive for a vocal mic unless you're a touring professional. It makes the most sense for the regular live performer who also uses the mic for recording, as it holds its own against just about any studio vocal mic. As a live sound mic, you'll need a really good PA system to show off the tonal excellence of this model, although its better-than-usual feedback resistance could be a deal-clincher if you often battle feedback. The SRV40 is a professional live vocal mic at a professional price.