Guitar amp and outboard manufacturers Demeter's RVB1 'Reverbulator' is a pedal-format spring reverb, derived from one of their rackmount units — and unlike any other pedal I can think of, it uses real springs rather than an emulation circuit. 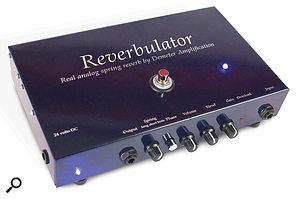 The top panel houses only a blue active/bypass LED and a latching footswitch, which sits in a rubber washer to decouple it from the springy goodness inside. The controls and audio I/O are on the front panel. Power (indicated by another LED) is delivered by a 24V DC PSU. A three-way rotary switch selects between a long reverb tail, a short one, or a mix of both. In this last mode, the output of the first spring is split and sent in parallel to the output and to the second spring. The signals are then mixed back together at the output. A 'Phase' button inverts the polarity of the second spring, and an adjacent pot sets the overall output level. The blend knob sets the wet/dry signal ratio, and the last control governs input gain, with a red LED to warn you of clipping.

The balanced mono TRS output jack socket is on the left, with the output on the right. Both operate at line or guitar level, so the RVB1 will happily sit in a pedal-board chain, a guitar-amp effects loop, or a console's aux send/return path.

Given this pedal's intended siting (on a stage floor), I wondered what Demeter had done to overcome the problem of isolating the springs to avoid unwanted 'sproings'. The bottom is attached to the rest of the chassis via four screws, each of which sit in little rubber feet — presumably to provide some decoupling between the unit and any resonant stage floors it might get plonked upon. A peek inside revealed two identical Accutronics reverb tanks, each comprising three springs. Two very short springs (which have nothing to do with the reverb generation) at each end of the tanks suspend the spring tanks from the case's inner walls, in a kind of shockmount configuration.

The receiving end of one spring is surrounded by a foil shield, to reduce magnetic interference. The internal construction is very neat and tidy, with all the controls and socketry nutted to the front panel, and all the components (including the generous power-supply reservoir capacitor, and the Burr Brown I/O balancing chips) neatly soldered to the PCB.

I was at first confused by the fact that both spring tanks were the same length. It became clear, though, that when in 'short' mode, the input signal passes through only one tank, whereas in 'long' mode it's sent through both. With the switch set to 'both', as described earlier, the phase switch inverts the polarity of the 'long' signal prior to summing, which enables you to achieve a slightly different tonal flavour. 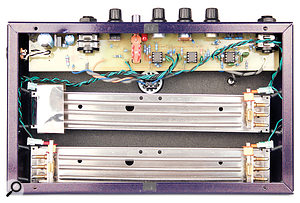 In order to put the RVB1 through its paces, I patched it into my console as a send effect and used it on a reggae dub mix I'd just received the files for — the perfect test! As I'd expected, the short-mode sound had a slightly 'splashy' quality, particularly on transient sources like snare drums. It was fairly bright, yet it still had a pleasantly smooth tail — much smoother than my own rackmount spring (an '80s JHS-branded model, with a tendency towards brashness). The long mode was significantly darker-sounding, with a much smoother envelope, even with spikier sounds. It sounds much more like 'real' reverb, especially with the input level set to tickle the springs rather than thrash them. Pleasingly, compensating for this by increasing the output level didn't result in distracting amounts of noise.

Should you want it to, the RVB1 also handles more substantial input levels gracefully. Cranking the aux sends and master up to the point where the clip LED was red for much of the time sent the springs into a dub-friendly flurry long before clipping was audible.

I settled on the mixed mode for most of the mix. This allowed me to set the aux sends fairly low, just enough to push sources back in the mix, and also to achieve spacier 'special effect' sounds on occasional guitar chops and snare rolls, by riding the sends on the relevant channels. The phase switch had only a very subtle effect on the sound, reducing the low-frequency content of the reverb slightly, whether in long or mixed mode.

I also tried the RVB1 as a guitar pedal, both 'in front' of my Fender combo and in its effects loop, and all the sonic characteristics I've described above remained the same. The blend control behaved predictably throughout its travel, making it easy to set up an appropriate mix when running it before the amp's input, while the equally well-behaved volume control made it easy to use in the loop as well.

Finally, the sproing test... Whether hitting the top of the chassis or pressing the footswitch, hardly any mechanical shock was audible in the signal. In fact, the industrial clang I'd anticipated was so quiet that I initially thought the pedal wasn't switched on! Knocking on the bottom made the interference shield bang against the case, generating an unequivocal 'sproing', but that's unlikely to happen in the real world.

I liked the RVB1. It's extremely well made, and there's a good range of features. Above all, it sounds great: it offers all the charm that a spring reverb should, but it sounds more refined than most, and is capable of treatments from the subtle to the extremes. The technical performance is also commendable, with minimal electronic noise and excellent mechanical isolation. Unfortunately, it's not cheap, and some guitarists who perform regularly may not want to risk subjecting such a pricey box to the dangers of the stage. Its size could also deter those whose pedalboard real-estate is at a premium, and the 24V power demands mean it won't play nicely with most multi-pedal PSUs. Finally, though the springs inside have been well isolated, I think an external switch input would have been a good addition, both to eliminate spring coupling completely, and to allow the expensive RVB1 to be tucked out of harm's way, yet easily activated from on stage via a cheap footswitch.

Despite its pedal format, I feel the RVB1 is best suited to studio use, where the expense inherent in producing a low-noise, high-headroom unit is more readily justified. And in this situation, as an alternative to the many digital reverbs most of us have at our disposal, I feel it does extremely well. Chris Korff