Daniel Blackmer, Director of Engineering at Earthworks Audio, chats to Sam Inglis about the company's distinctive approach to microphone design — and explains how a quest to improve loudspeaker quality convinced Daniel's father, David Blackmer, of the need for mics with better phase linearity and impulse response.

Earthworks Audio was originally founded to design and manufacture audiophile loudspeakers by David Blackmer, who had previously invented the DBX noise reduction system and was the founder of dbx.

David Blackmer’s goal when starting Earthworks was to make the best sounding speakers on the planet. When the journey began, he used measurement tools that were accepted to be the world standard. After the first few steps he realised that the measurements he was obtaining were not as good as he believed they could be. He analysed these tools carefully and realised that new standards would be necessary if he were to even come close to achieving the results he knew were possible. 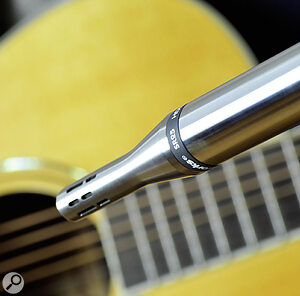 The first tool he designed to this new standard was an omnidirectional microphone. This led to the manufacture of the OM1. David now thought that he could get back to designing his “dream” loudspeaker. His colleagues, however, persuaded him to design other microphones and preamplifiers. These products would soon set a new world standard for realism in the art of recording music. While the years passed and these new microphones and preamplifiers were being manufactured, David constantly worked on his goal of designing the best sounding loudspeaker for true audiophiles. He died in 2002 leaving the company in the hands of his family.

While they no longer make the loudspeakers, the principles that David first envisioned when the journey began can still be seen in Earthworks microphones. Precision engineered and hand assembled, Earthworks microphones represent the pinnacle of technology and art in microphone design. Each microphone is hand-tuned and tested to ensure the purest and most realistic capture of your sound, be it live on stage, recording in the studio or out in the field.

Editor In Chief Sam Inglis has been with Sound On Sound for more than 20 years. He is a recording engineer, producer, songwriter and folk musician who studies the traditional songs of England and Scotland, and is the author of two books: Neil Young's Harvest (Bloomsbury, 2003) and Teach Yourself Songwriting (Hodder, 2006).

Your Questions Answered
4 days 7 hours ago.